Certificate Number: 1882Titan Name: Odium Aeternum, "Eternal Grudge"Class: Chaos Reaver Class Battle TitanPattern: Mars PatternHead Unit: N/APrimary Armament: Two Laser Blasters and an Apocalypse Missile LauncherPrinceps: Father Nurgle cares not for his name, the Princeps has been subsumed by the TitanTitan Legio: Legio MortisDemi Legio: UnknownBattle Maniple Composition: UnknownOwner: Iosh T.Location: Washington, USAComments: My journey as a modeler is thankfully long, but only recently have I come to own a Titan that I can display here.

I've had a Warhound for a couple of years now, but it's a refurbished one that a buddy of mine veritably destroyed before giving up and trading it to me. I couldn't resist the challenge, and after a couple months worth of disassembly, oven cleaner and simple green scrubbing, I had a severely damaged and, to my mind, incredible heap of resin to play with. After five months of dry fitting, I produced a lovely Mortis engine, with hand sculpted heraldry inspired by the transfer sheets all over it. I love the beast, for it turned out far better than I thought it would.

At any rate, my sweet wife watched my struggle to fix the mistakes he made and to turn an Imperial Titan into an avatar of Nurgle. She patiently listened as I explained how slime and tentacles didn't interest me as much as making it look like a beautiful machine turned to rust and ruin, as it was halfway there already. She decided, upon seeing how I triumphed over the sickly thing, to buy me a Reaver.

The works and collections I see here beggar my imagination and my pocketbook! Owning a Warhound is like a dream for me (I still have an incomplete kitbash started in 2007! Lame!), but now I have this Reaver too, and even if I've waited nearly a month for replacement parts, I feel high as a kite just looking at the heap to assemble. What an incredible model!

Trying to find direction on its assembly is what led me to the Titan Owners Club, and I am agog at the talent on display there.
Photos: 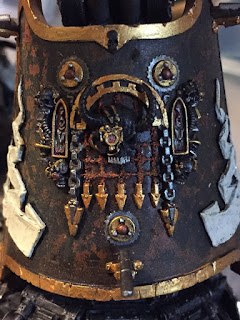 The touch of Nurgle certainly shows in his work. 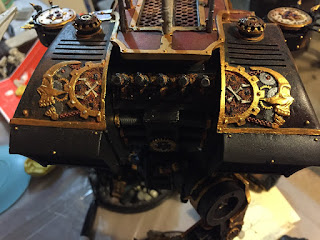 Very unique additions to the carapace of the Warhound mentioned earlier. 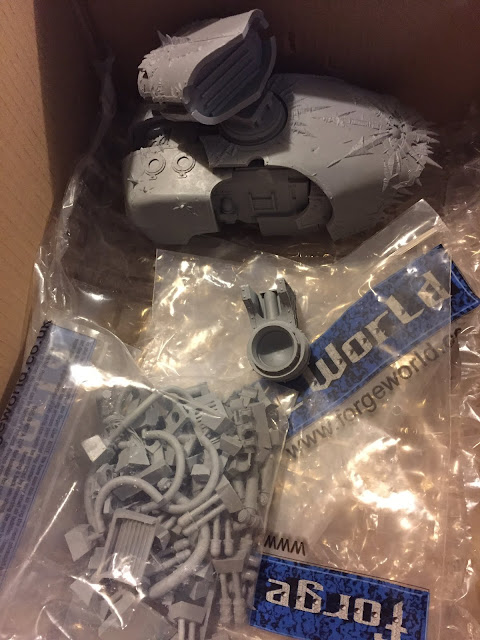 The familiar sight of Forge World resin on the Reaver.