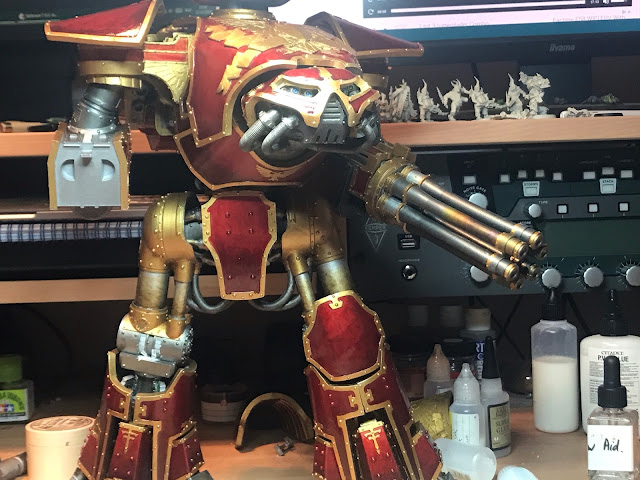 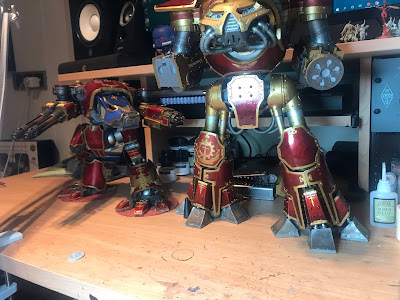 Sister Hound looks on to it's bigger Brother Reaver 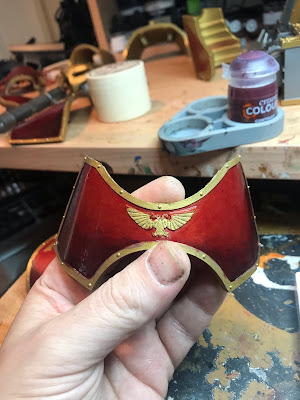 Some great shade transitions too 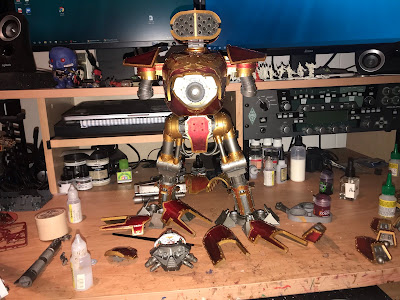 In progress on the workbench 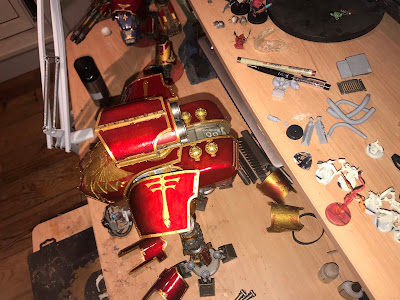 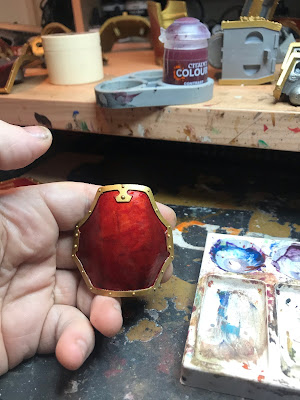 Superb deep candy reds, Princeps Stealthelephant has the patience of a saint. 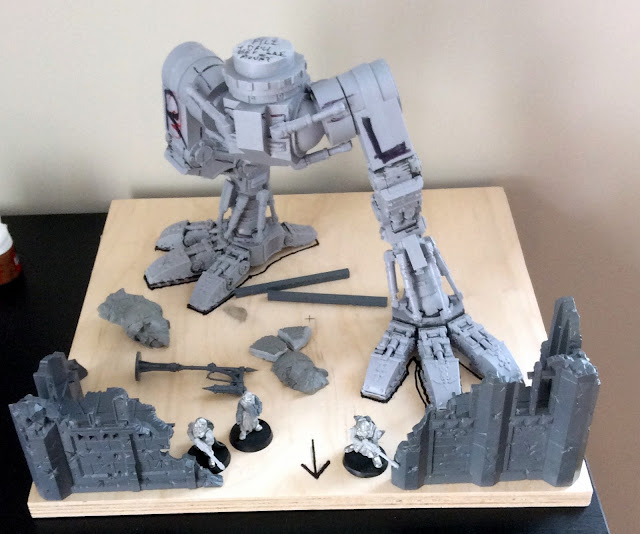 The basis of a great looking Titan diorama 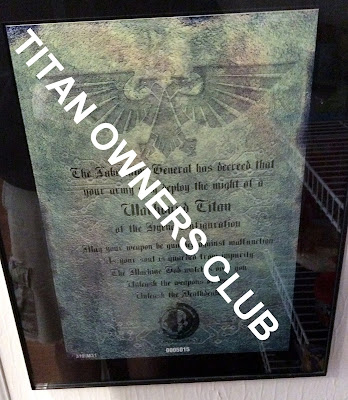 The Certificate proudly framed on display. 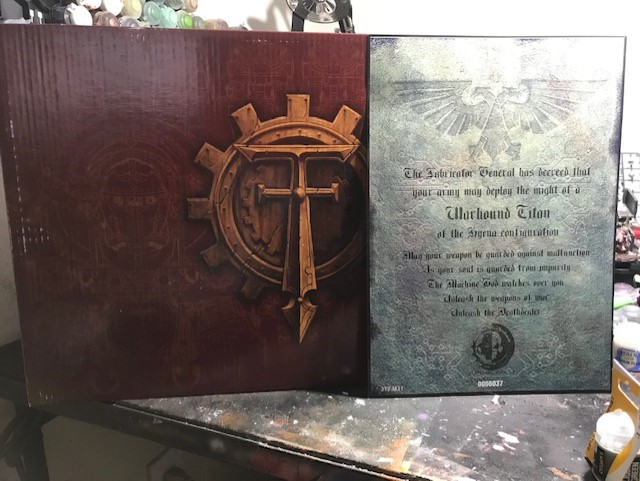 Welcome back to our coverage of the Adeptus Titanicus supplement Defence of Ryza.  This book treats us to the usual expansion of Titan Legion rules and also give us some new Knight House rules, included House Morbidia who is doggedly loyal only to Kelbor Hal and House Sidus, the secret children of Ryza that proved Mars had every reason to be jealous of the Forge World after all.

The supplement provides rules for:

As usual, each is given a quick blurb about what makes them special along with a full page of rules, stratagems, and traits.  The rules for the Legios Crucius and Mortis are the same as their previous publications but are included in Defence of Ryza since both forces had roles to play in the conflict, especially Crucius since it is their home Forge World.  We’ve included brief descriptions of each Legio to give you a taste of what is coming, but full breakdowns of each Legio are in their own article.

·         The crusaders of the Titan Legions, they are inexhaustible and staunchly loyal 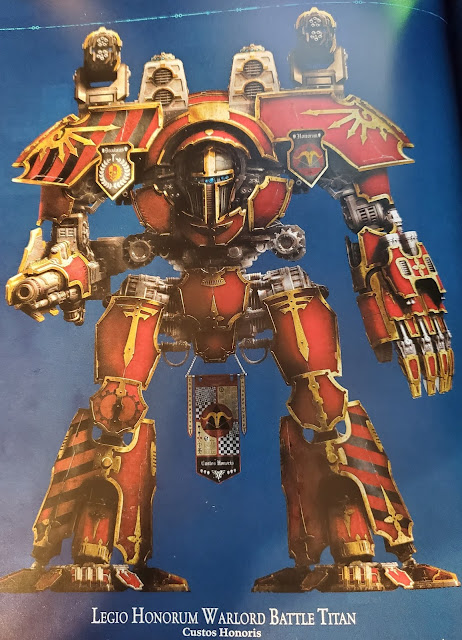 ·         Ryza wasn’t the only Forge World that Mars had beef with and Osedax paid the price for it.

·         A Legio reforged in the fires of war, Osedax focuses on unshakeable Command Checks and a vengeful style. 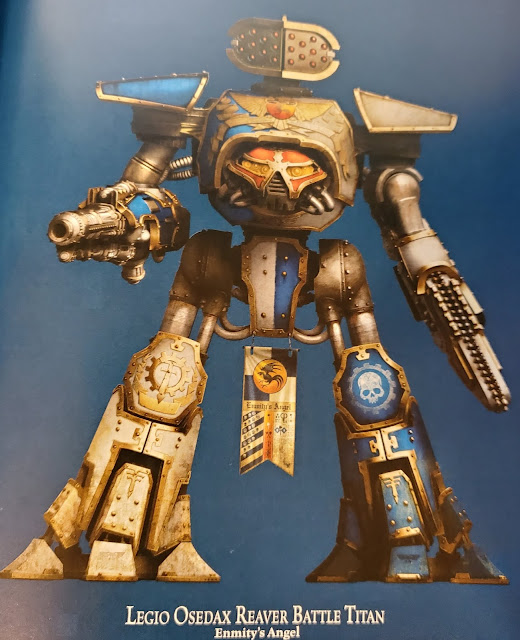 ·         Durability is a by-word for Crucius and their ability to keep plasma going all day and remaining cool is their hallmark.

·         We sense a fire theme among the Traitor Legios though these guys are a minor Legio that just happened to campaign alongside Horus and Lorgar a lot.

·         These are the spearhead specialist of the Traitors. 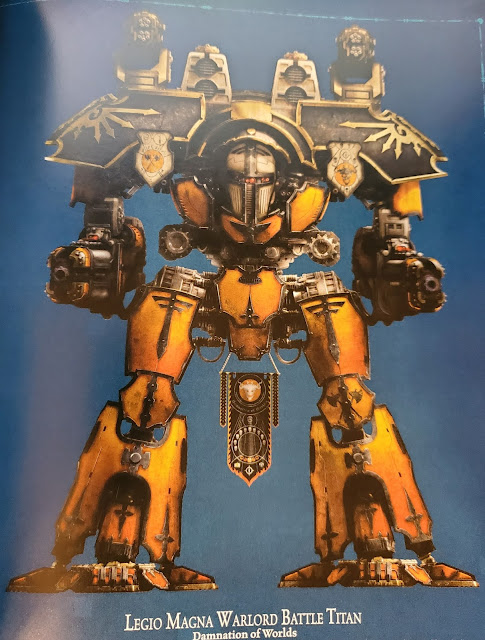 ·         The Legio Pallidus Mor would love to have a word with these guys who jack their paint scheme, though where Vulturum stands apart is its shrouded history and use of esoteric and experimental weaponry.

·         Specialized wargear define this Legio while it hunts the weak. 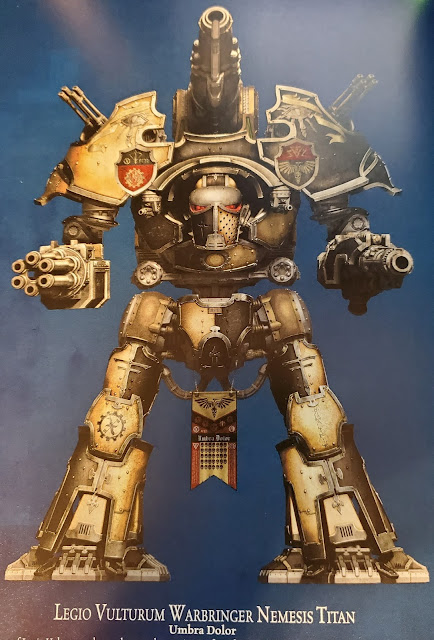 ·         The Legio Mortis reflects crews that are methodical killers.

The book gives us four new maniples, including:

This time around the new maniples are actually very strong and are probably among the best in the game.  Perpetua Maniples will be great for the average gun line player while Extergimus Maniples are for the things you just want dead.  The Dominus Maniple is a reprint of the White Dwarf rules and still provides some amazing opportunities, acting as a modified “expanded” Axiom Maniple with different rules and completely different benefits.

Knights take on a larger role in the Defence of Ryza story and it’s great to see them nab the spotlight outside of a book like Doom of Molech.  One moment in particular stands out in the lore and it’s the stuff of legend.  This book gives us new household roles, along with the usual 1/3 sheet of lore and Seneschal Traits.  We’re treated to: 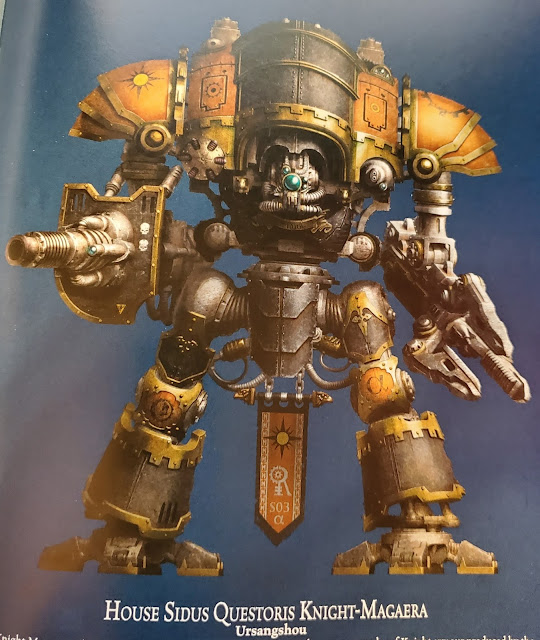 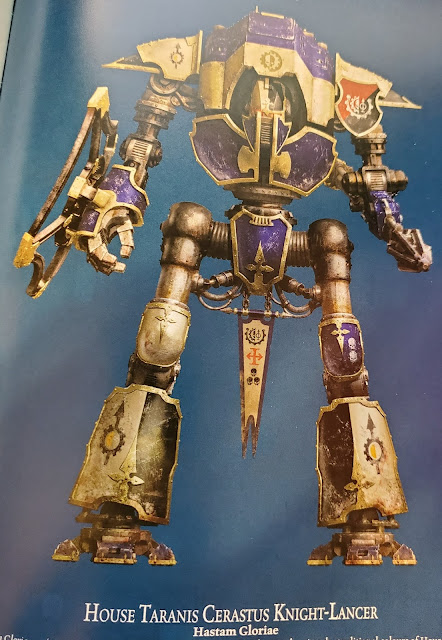 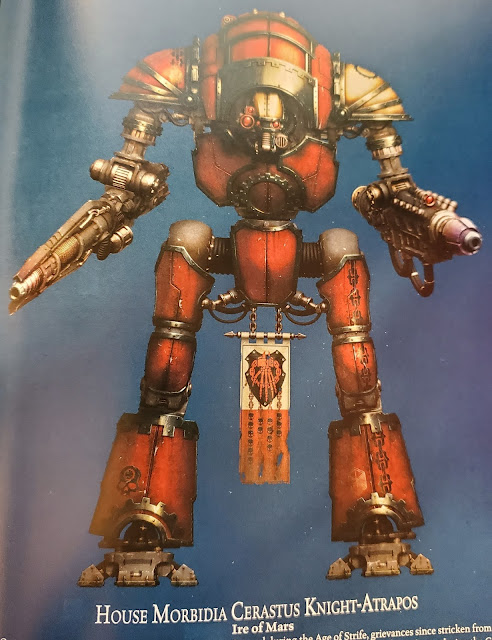 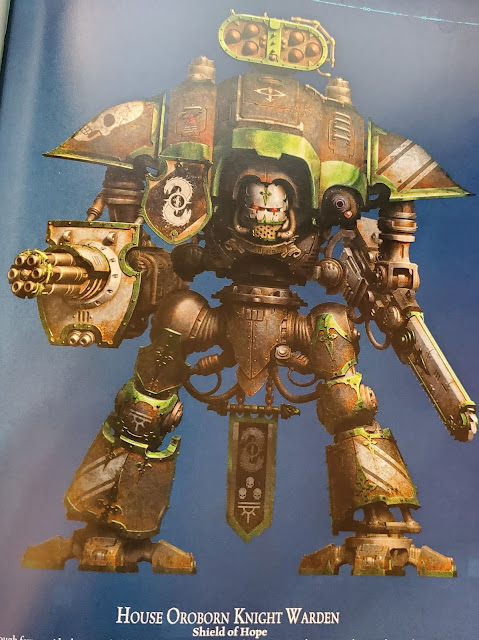 Today we being our review of the newest supplement for Adeptus Titanicus, Defence of Ryza. As usual, we’ll start with a review of the lore supplied in this new book, covering this brutal campaign born of nothing less than jealousy and made more important due to Horus’s ambitions. 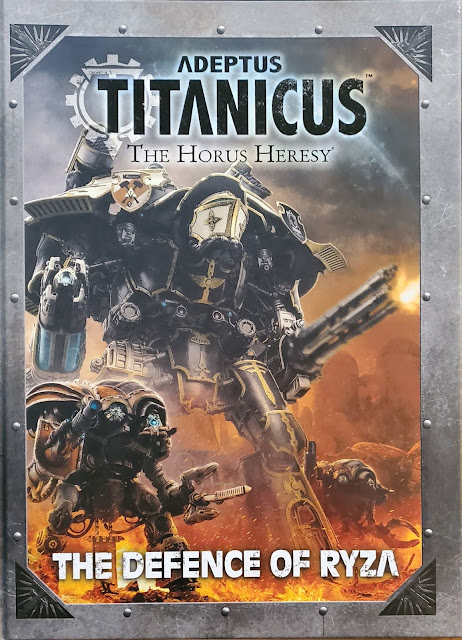 The fourth supplement in Adeptus Titanicus, Defence of Ryza is a hardback book that covers the battle for the Forge World of Ryza. Like always, there is a gorgeous cover, but this time we are treated to a special Mechanicum-type Knight on it. Portents of things to come? 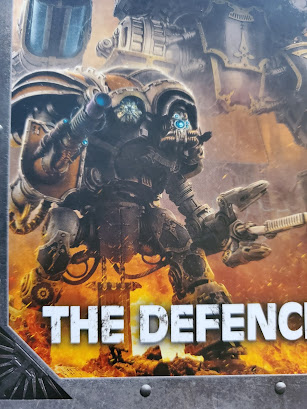 Clocking in at 108 pages, the largest of the AT supplements, the new expansion provides us with new lore, missions, Titan Legions, and more. It’s easy to say that Defence of Ryza follows in the footsteps of the other supplements. So, what’s new? 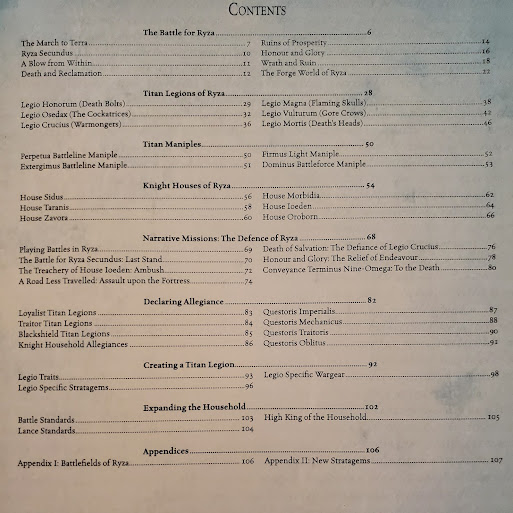 We got a map. Sadly, this map isn’t nearly as special as some of the previous ones and it’s largely useless, showing that Ryza has two huge continents and a bunch of bridges connecting them. However, we did get 18 pages of lore when you factor in the planetary/continent description pages.

Most of the new lore is simple, yet impactful. Fans of Warhammer 40,000 will have long known that relations between Mars and Ryza are somewhat strained. This was actually true even 10,000 years prior, during the days of the Mechanicum. Mars is the epicenter of their domain and none should stand as tall or as proudly as they, which makes Ryza’s power and standing absolutely unbearable. 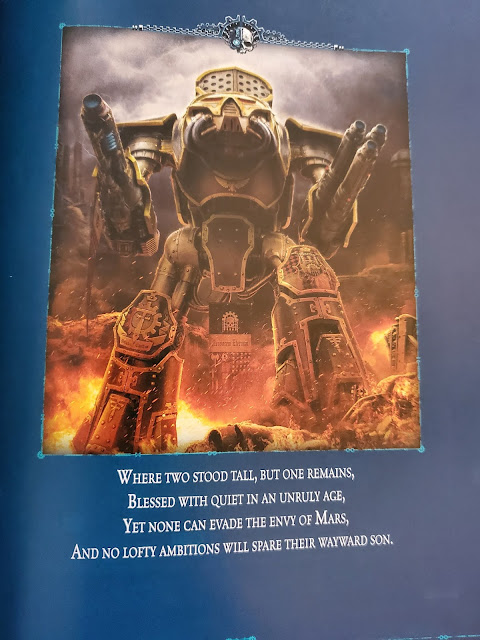 Ryza is powerful, well-defended, and loved by many other Imperial forces in the galaxy. It became the Furnace of Shackled Stars through its mastery of plasma technology and its ability to forge alliances by helping those it can return to the fight. Horus sees this as a huge threat to be destroyed after Beta-Garmon is cracked, something that the traitorous forces of Mars are all too willing to sack and even claim for themselves.

The simplicity of the story is that once the “why” is revealed, it’s just a matter of telling the facts of a string of battles. That, admittedly, feels like a bit of a shame. There is nothing special about the story beyond the jealousy Mars had of Ryza and Kelbor Hal’s wish to be able to claim it for the Red Planet. The Legios Vulturum, Magna, and Mortis use trickery to gain a foothold on the planet and then overwhelming force to nearly capture it. We won’t go too far into the story so as to avoid spoilers, but even the way the Loyalists ultimately, and barely, secure victory isn’t all that special. We do, however, have to say that the conditions behind that victory are suitably heroic and bring shame the Titan Legions, which we don’t often see. We also find out later that Mars was right to be jealous and that the distrust some have of Ryza’s secrecy in the 40k era is actually warranted. While the lore itself doesn’t feel particularly special, it’s fairly well written overall with only a few parts feeling rushed. However, this sets the stage for what feels like forces and missions that will be full of outright carnage and heavy-hitting forces that may feel like a throwback to Titandeath but in a good way. This creates a very exciting start to this book. 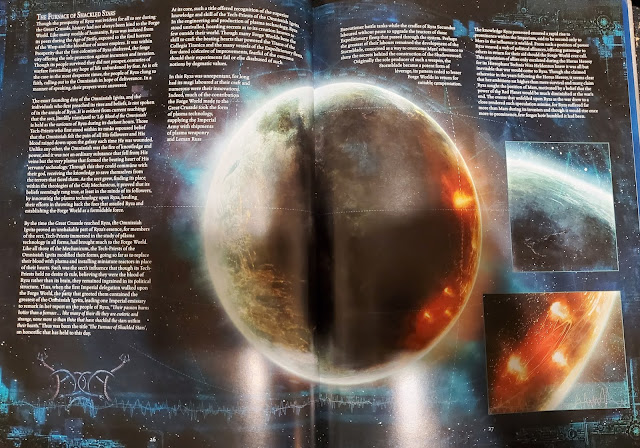 Owner: Pierre "SquareRoot".
Location: Paris, France.
Comments: The Titan underwent the Rites of Construction and Rite of Colour over 9 months in 2009, my childhood dream of having a giant robot that stemmed in the Mechwarrior video game series was fulfilled. The paint job is alright but it's quite old now and with 10 more years of painting experience I could do much better. So now that he's in his new display stand and I see it everyday maybe he'll get an improved paintjob in the coming months! 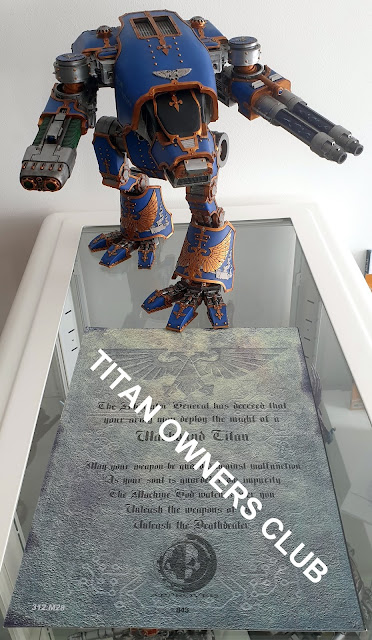 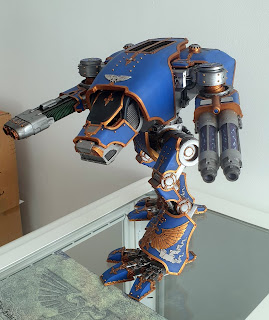 The paint scheme even though Princeps Pierre says is old - still stands up well and bright livery, (just a yellow head missing in my opinion ;) and Astorum has another Engine-TOC) 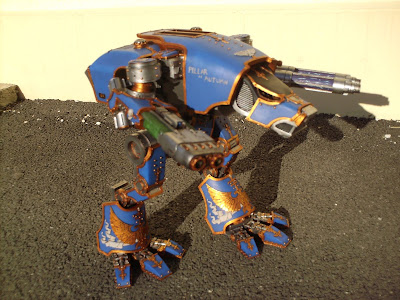 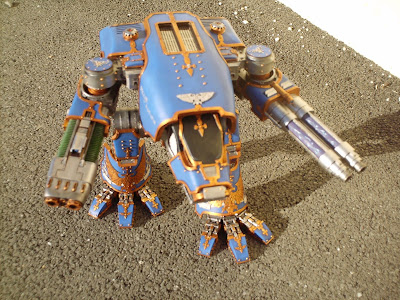 "Pillar of Autumn" on an Engine Walk 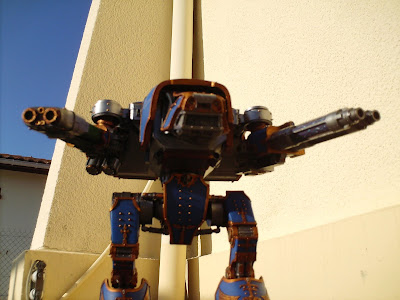 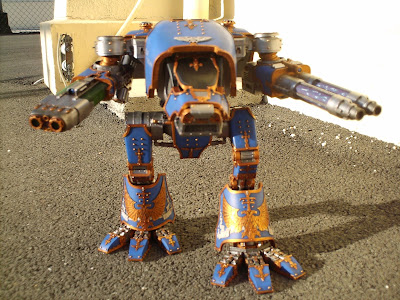 Thanks for registering your fine Engine Princeps Pierre. 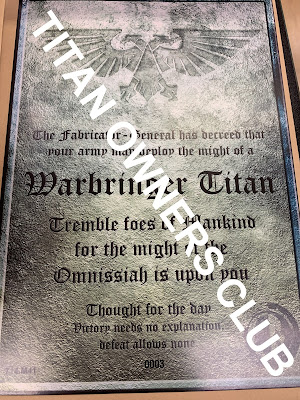 A very early Warbringer Nemesis, No.3. So the early Certificated Engines went to the US. Thank you for registering this fine Engine Princeps Goji, we look forward to seeing the Godzilla inspired Rite of Colour!