Owner: Anders J.
Location: Norway
Comments: Once, way back in time, stationed at Beluga 61 to defend it against all sorts of ugliness, the current status of "Triple Force" is that of being "disassembled" and non-operative. This was done by the peace loving, aristocratic society of Beluga, for it's value as artistic monuments, as there had not been a threat of war for millennia and the purpose of the machine seemed irrelevant. The recent outbreak of civil war, between xenos infiltrated separatists, the liberation front tainted by chaos, and the Emperor friendly loyalists, has brought new dangers to the planet. Hive Triplus, and the Governor of Beluga 61, is overcome by chaos, supporting the liberation front. The remaining loyalist forces are struggling to save this world for the Emperor, as the Imperium initiated Operation Publicanus failed to crush the tainted leadership and seperatist terrorists. When The Leviathan "Necis Omnium" seemed overcome by forces of chaos, all hope seemed lost. Acquiring long lost rumours of the Warlord Titan's existence, however, gave new hope to save the planet, especially when it's main body was located. The loyalists saw themselves upon a new campaign, to retrieve Triple Force's disassembled armour and weaponry and to rebuild it so they could sack the hive cities of Triplus and Secuun, respectively fallen into chaos and separatist hands. 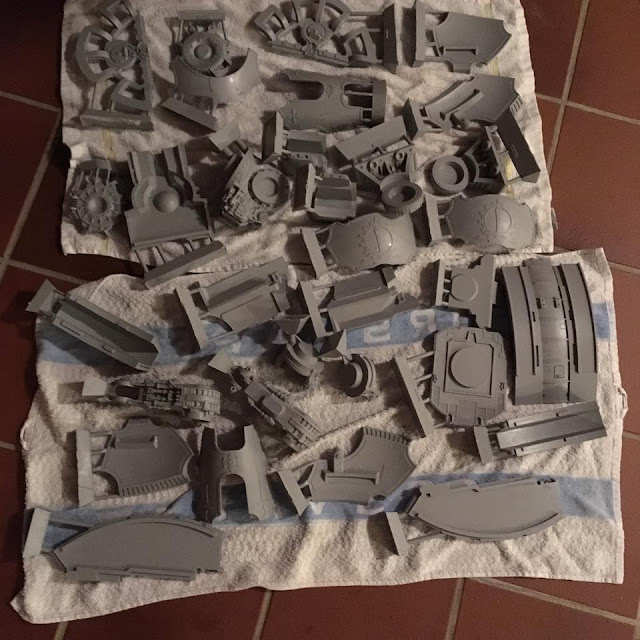 The Rites of Cleansing begin. 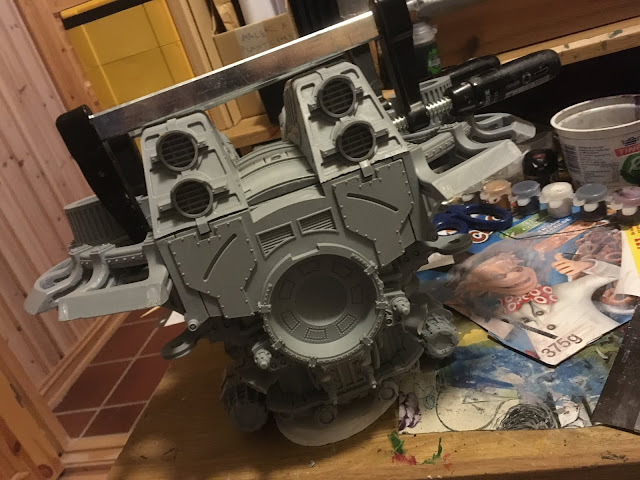 The forges of the world burn hot to produce the torso. 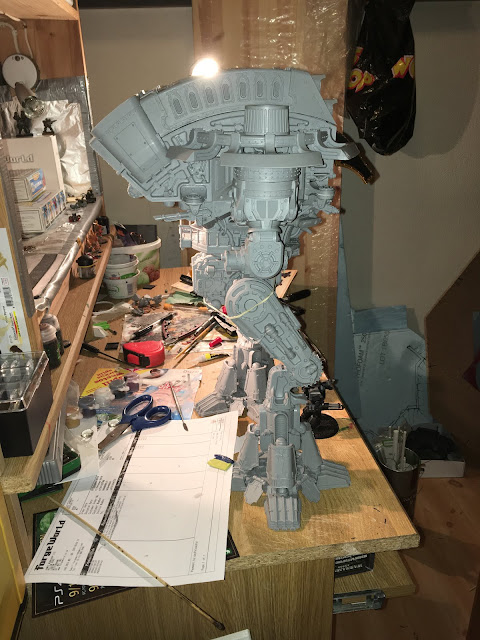 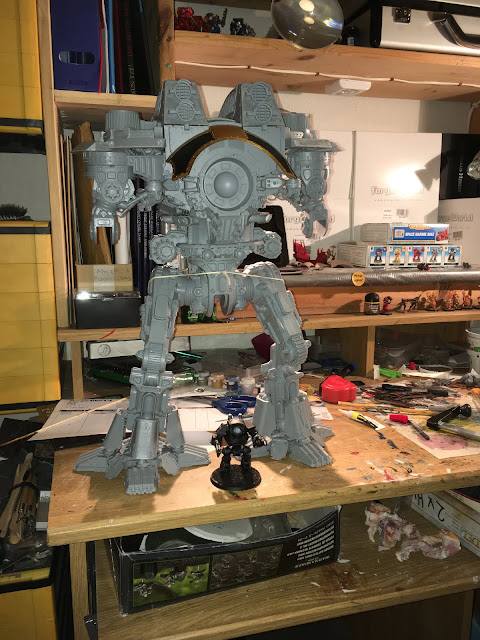 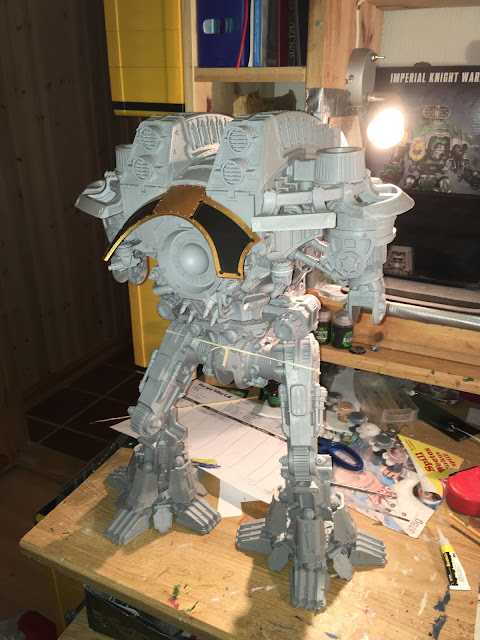 The main superstructure seems to be finished, and a test fit of a painted piece shows itself. 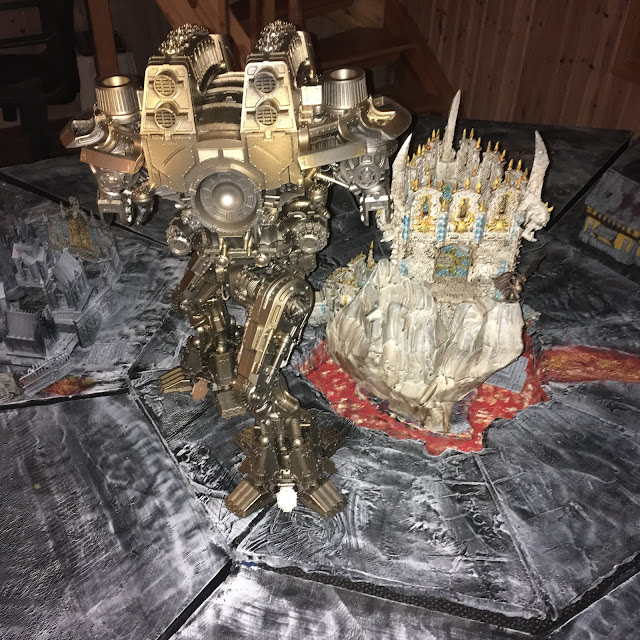 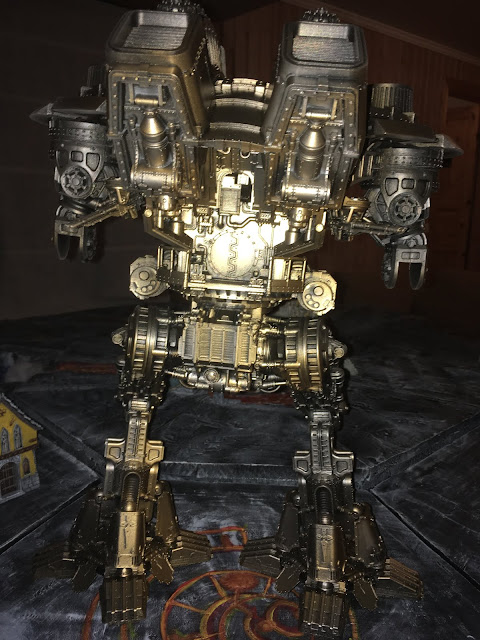 A mix of colors adorn the Titan as light bounces from her bright hull. 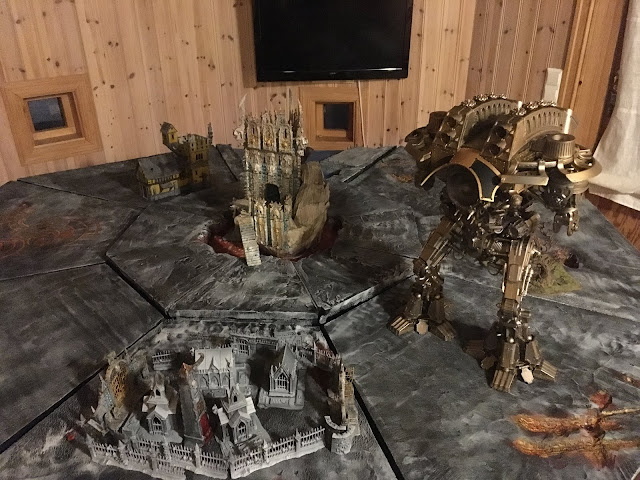 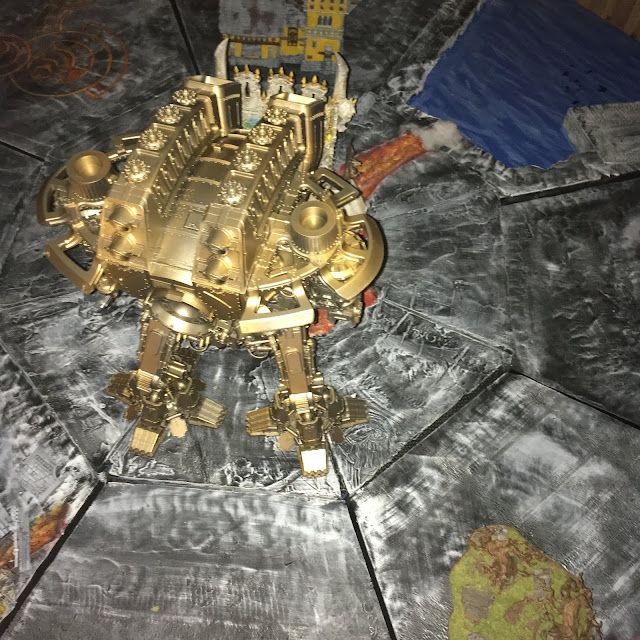 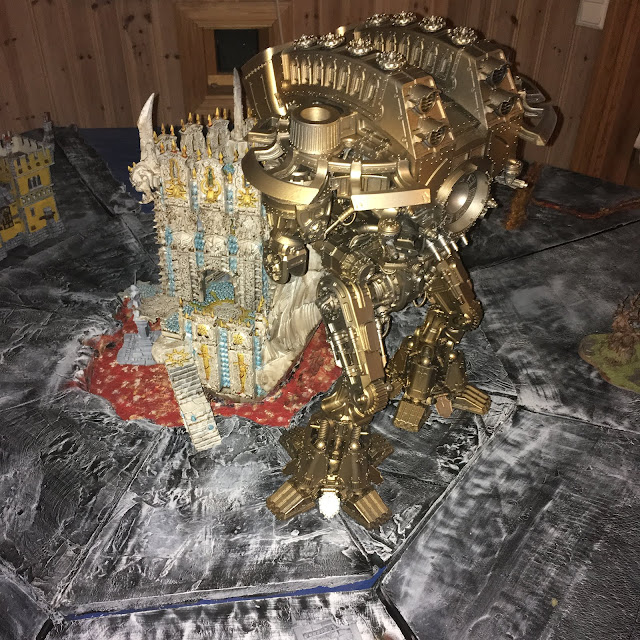 While the world of Beluga-61 is in the grips of heresy and betrayal, Triple Force comes together.

A little update from Anders! 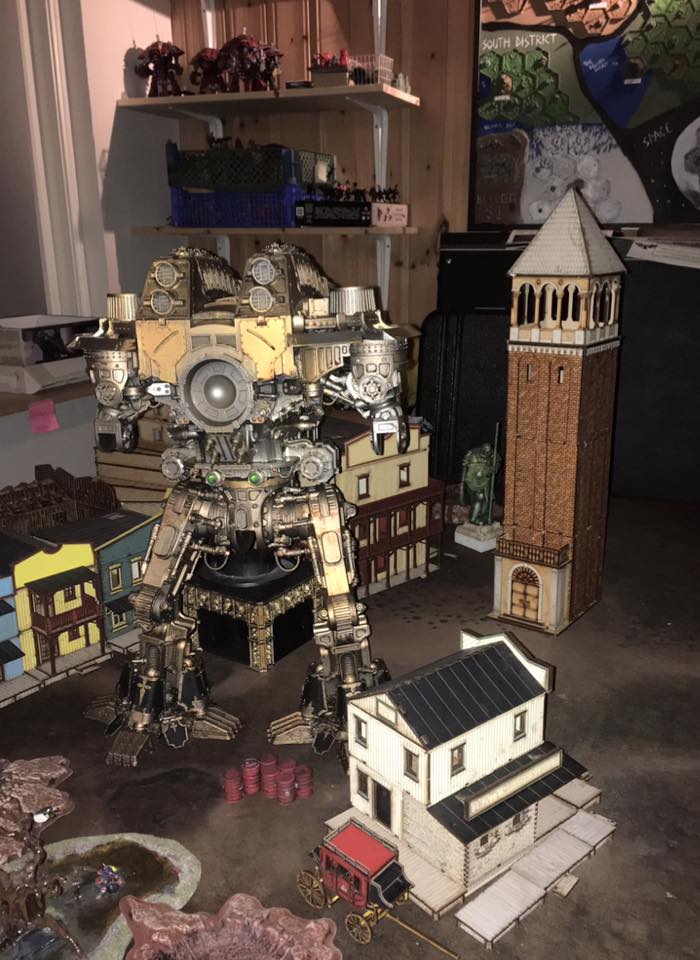 ..This is a paint in progress picture, awaiting more agrax earthshade from the suppliers..
..basic colours of bot-skeleton done, just some shade missing on upper body..
..armour plates base coated and under rite of painting outside picture frame..
..head and weapons still awaiting rite of cleansing..

LOL. Any progress is good progress we say! 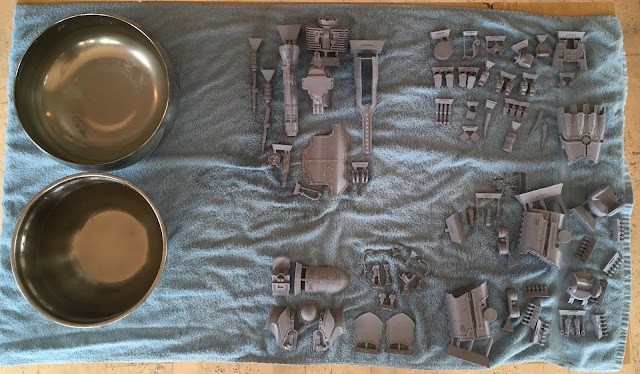 The Rite of Cleansing begins for the head and weapons. 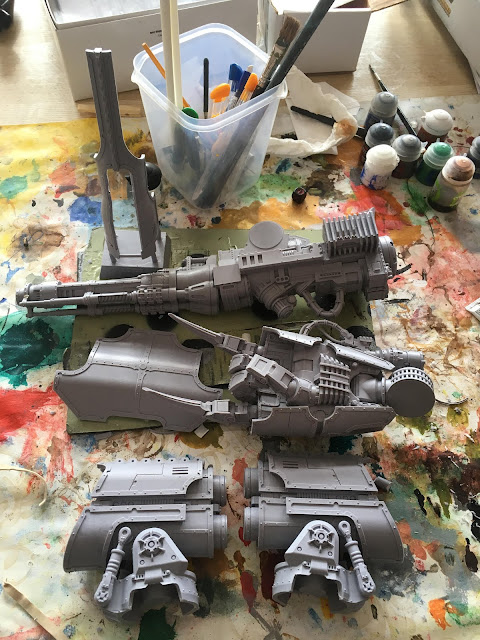 The weaponry is coming along. 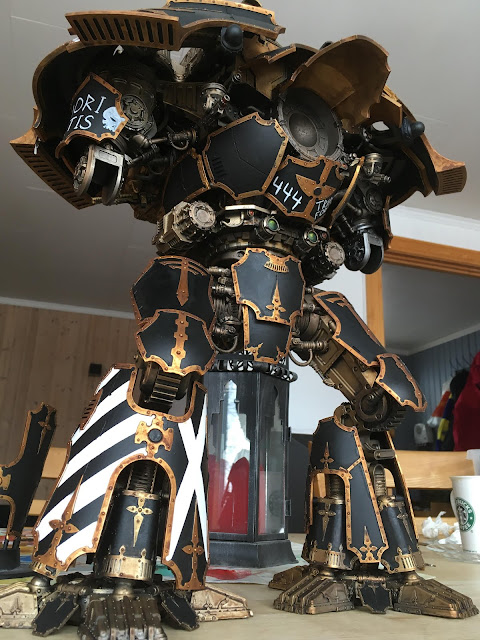 Most of the armor plates have been recovered and her framework is ready. 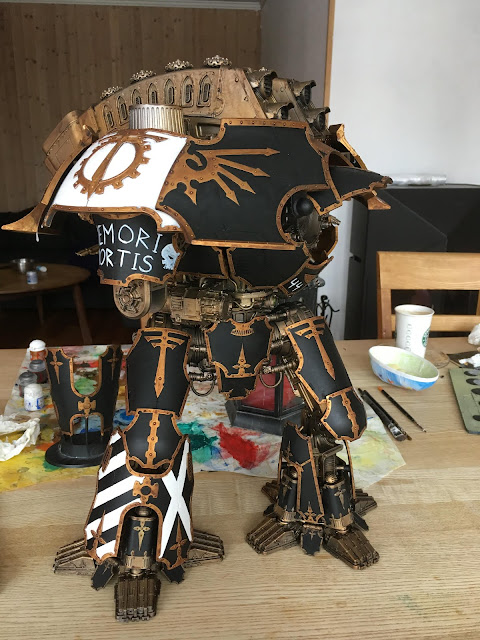 A good motto for what has been reported to us to be the Belicosa Volcano Cannon arm. 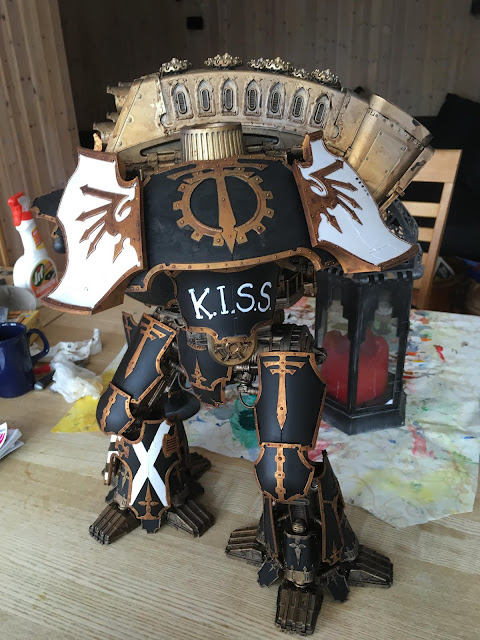 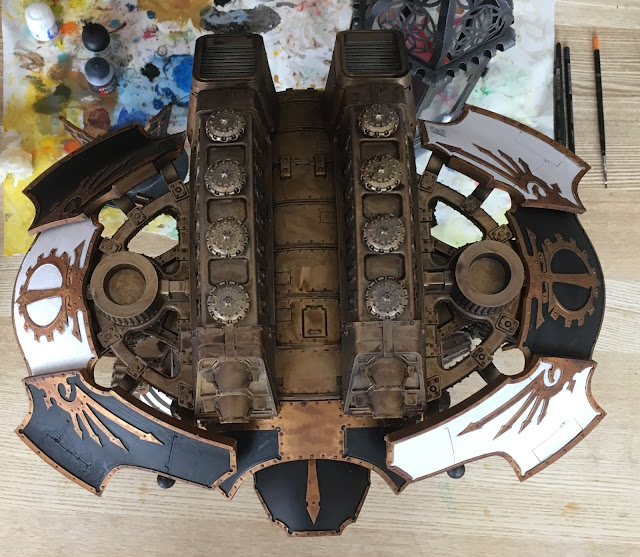 Very nice shot of the upper carapace coming together. 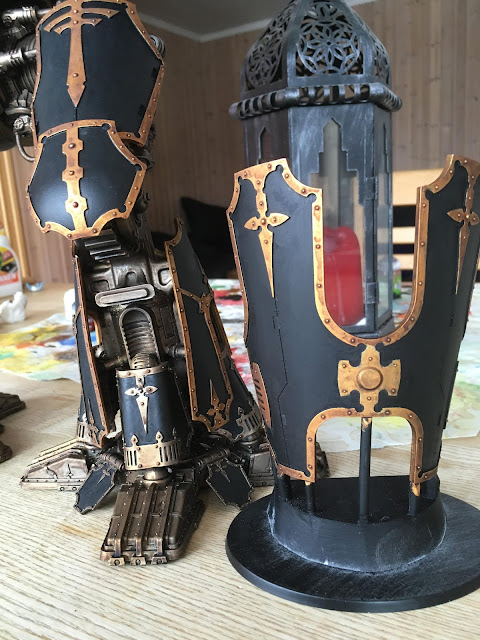 From Anders- The last armour plate: here as an explanatory hologram, is somewhere in the lost suburbs of Beluga 61, and the S&R teams will continue their work to find it, otherwise the Titan will be vulnerable to infantry attacks... (Thinking posters and other "monument vandalize" for this leg plate, to use it as an objective in kill team /normal 40k games. Details that will all be turned upside down if the leg plate is recovered, just in time to mount it but too late to cleanse it before the Titan goes to battle...) 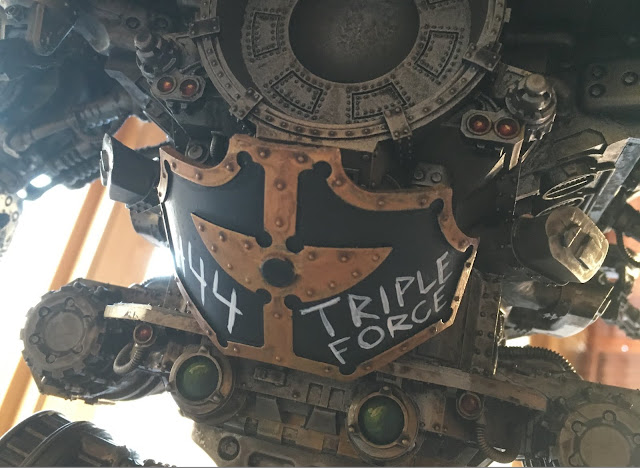 "Triple Force" will soon be ready to walk, to kill and to redeem the centuries of shame as its pieces were used as monuments and art. 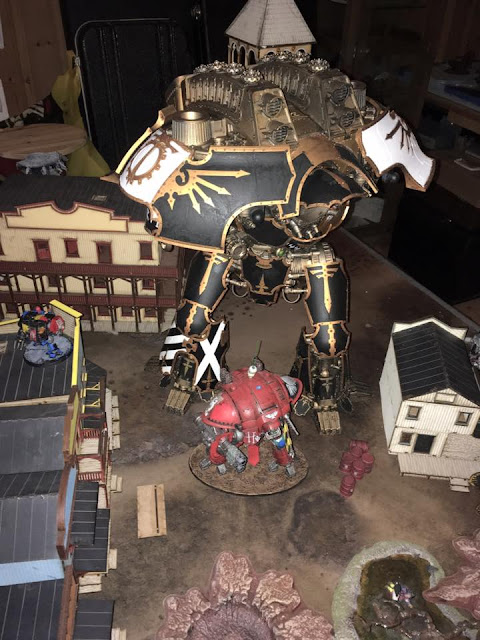 The scale of the Warlord really comes to the fore when terrain and Knights are involved. 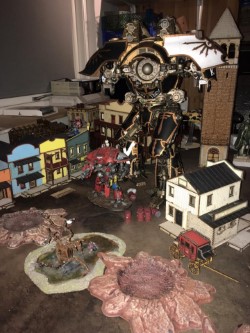 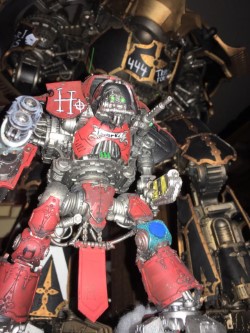 A good shot looking up at the Titan, like from the perspective of a normal person. 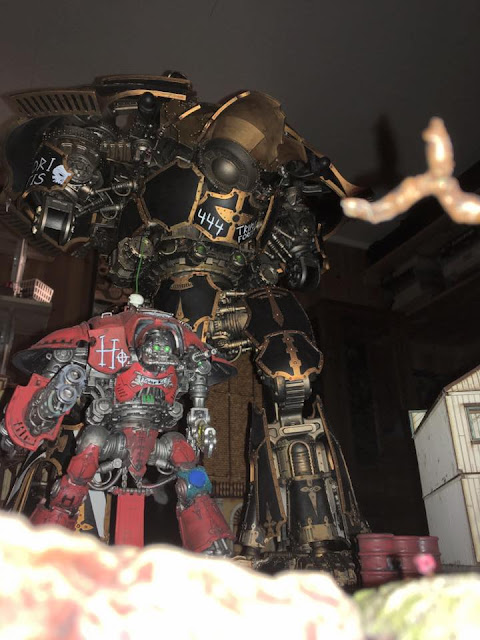 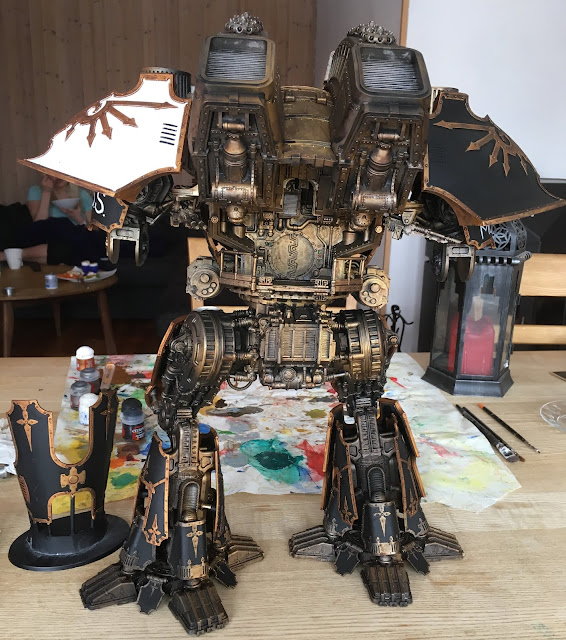