Owner: Riku L.
Location: Finland
Comments: The contents of the package was labeled "Reduced Scale Model" so I assume there is an actual Warlord somewhere ;) {It is also Finland's first registered Engine - TOC} 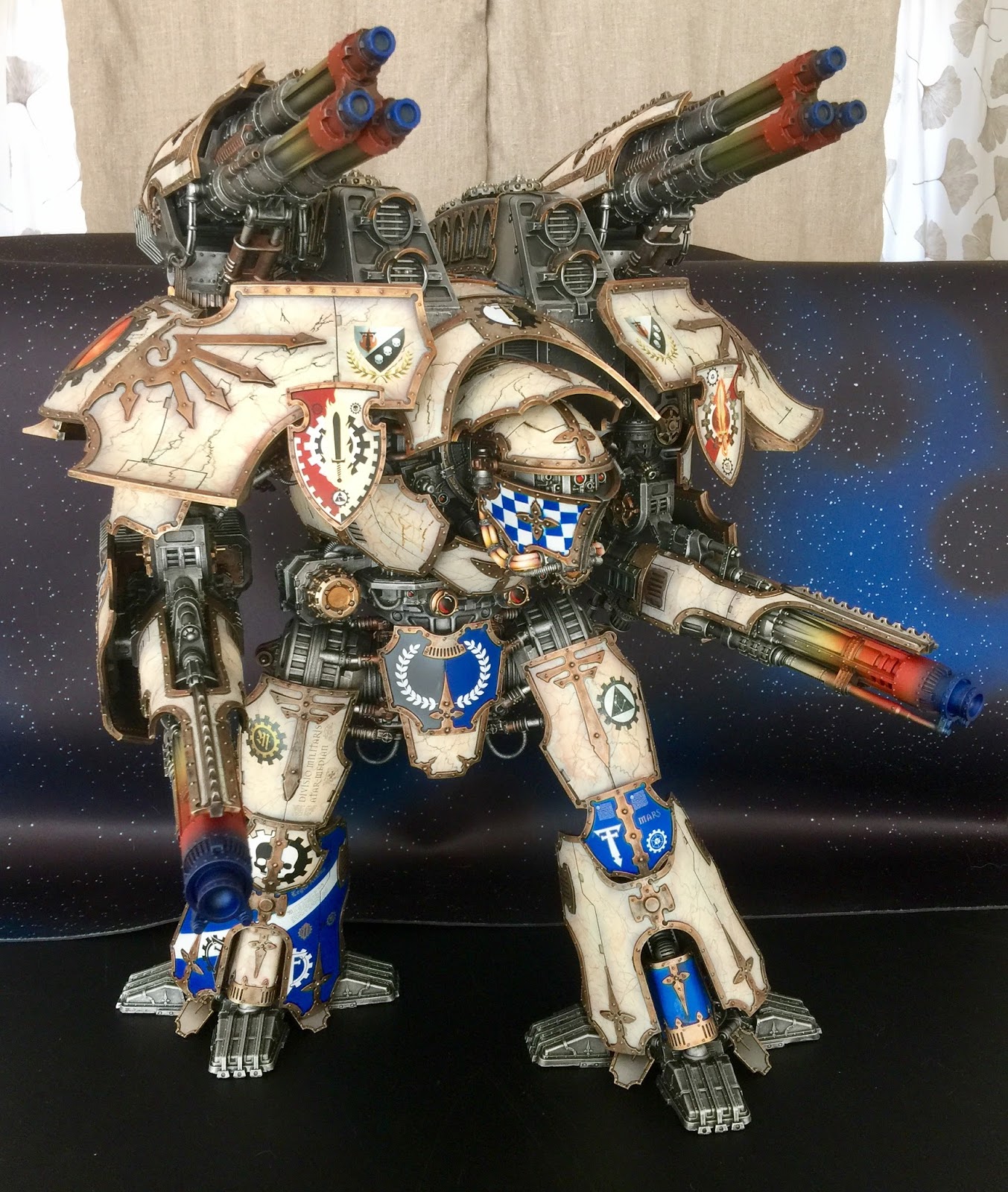 What a masterpiece. The look, the patterns, the effects, all truly incredible. 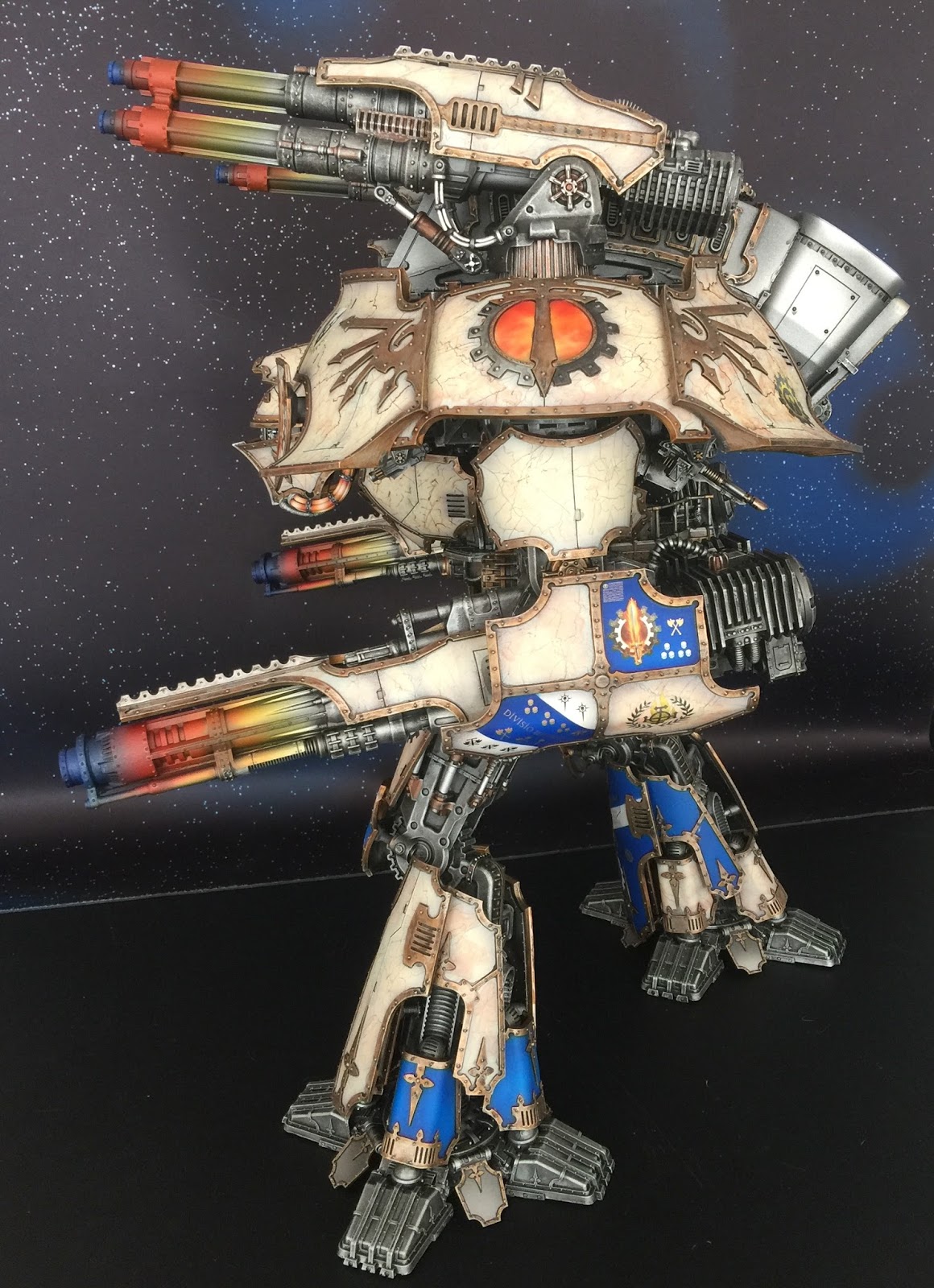 All in all a total labour of love. the painting journey of this project has been a total privilege to follow on Titan Owners Club. 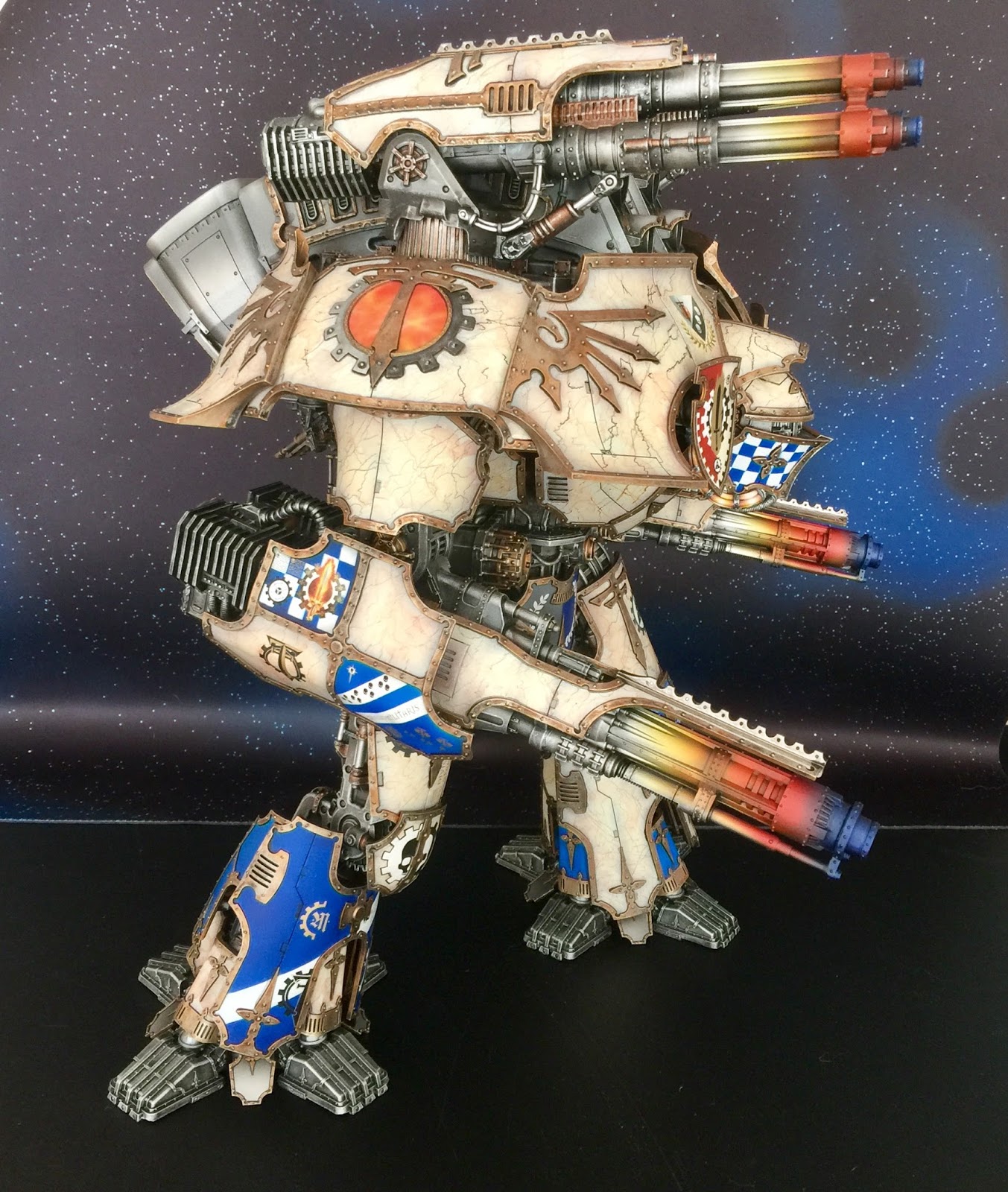 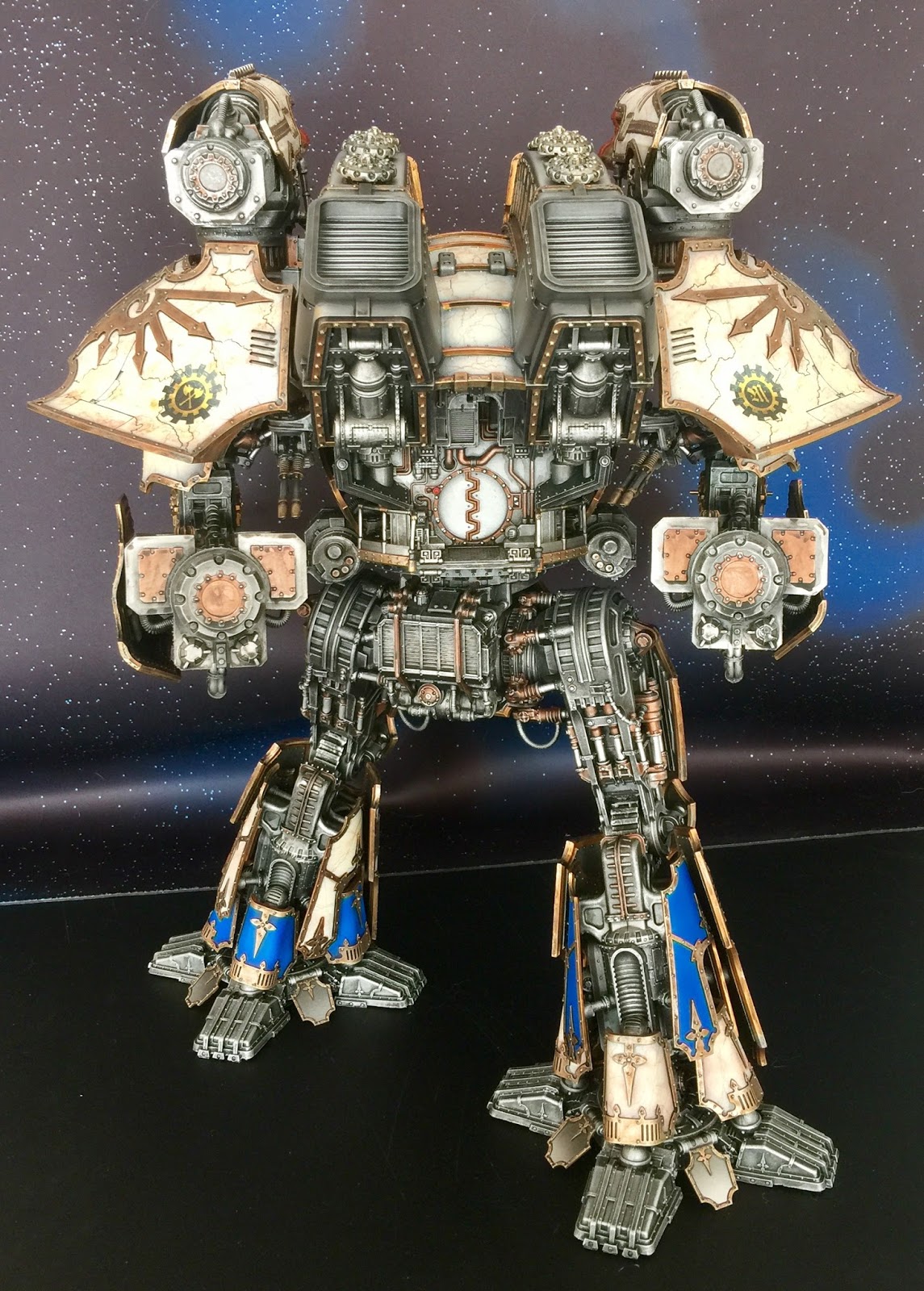 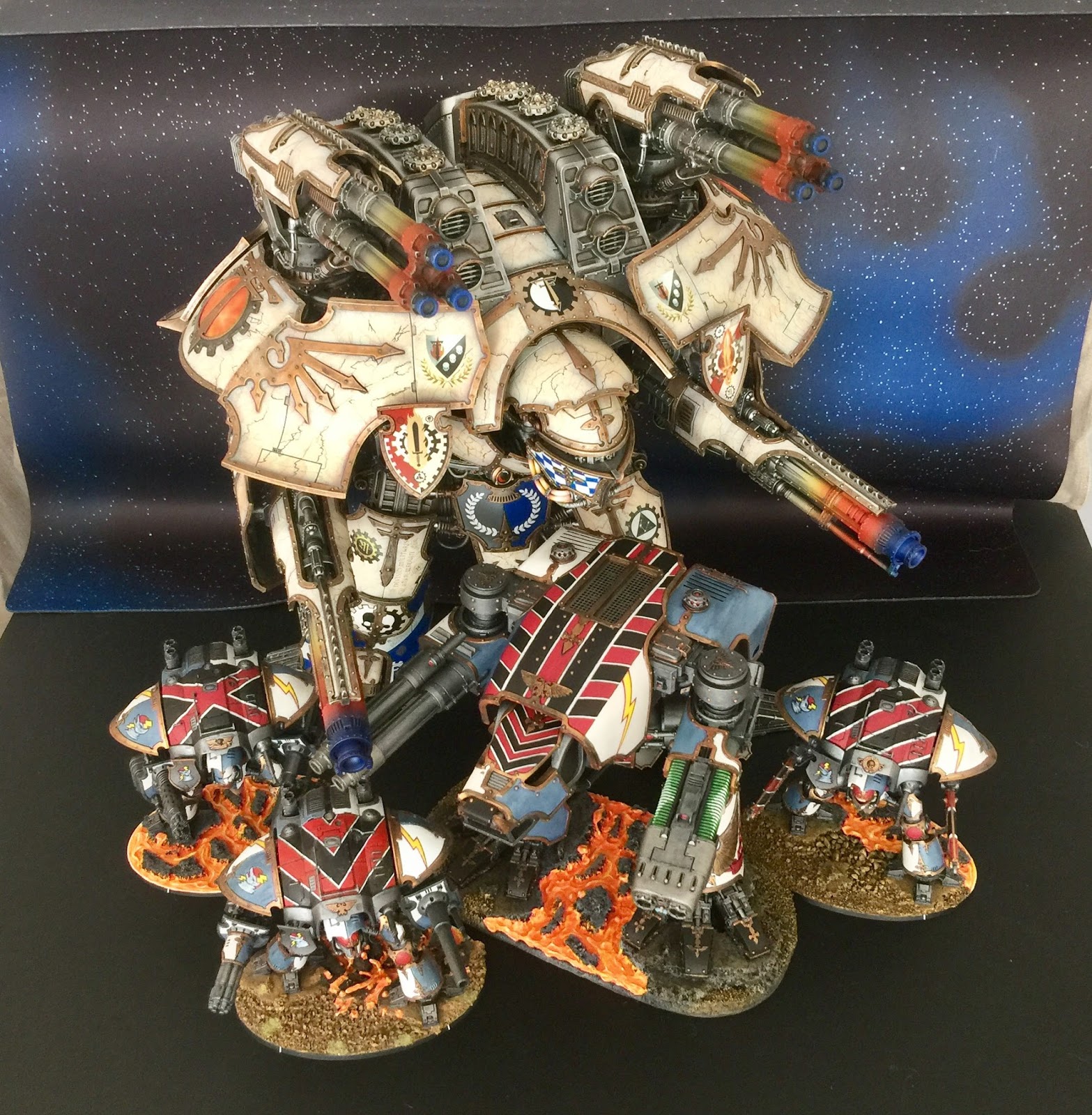 A great looking Banner of Knights there. 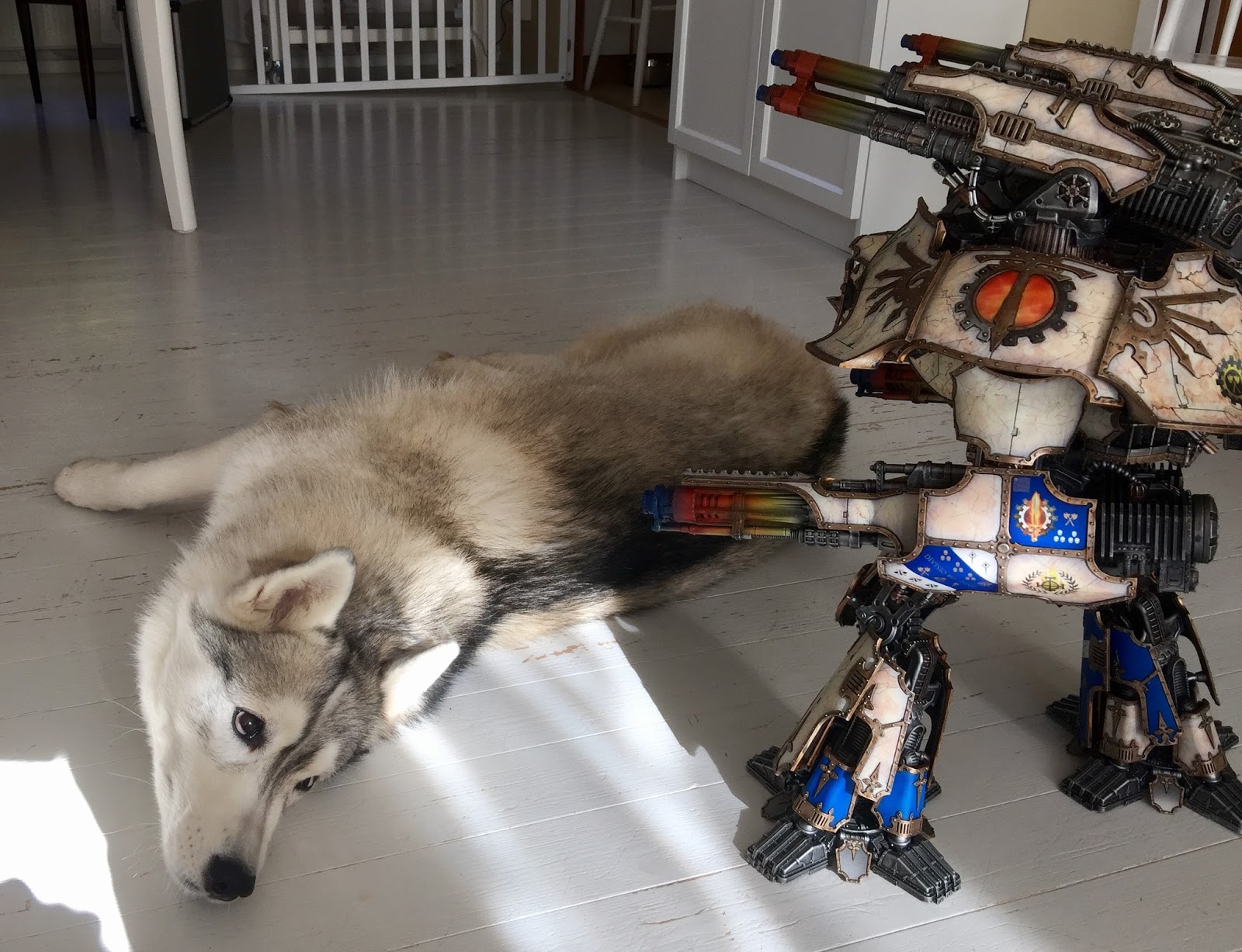 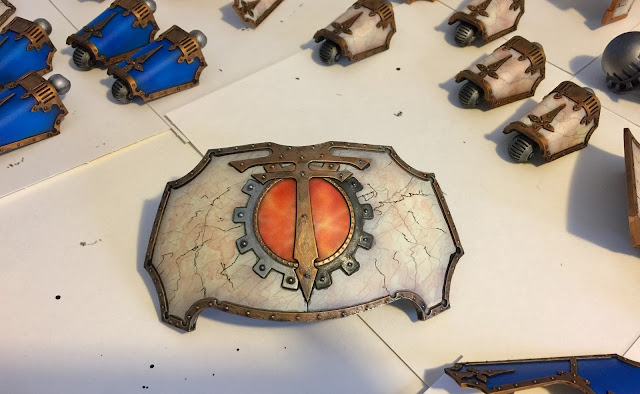 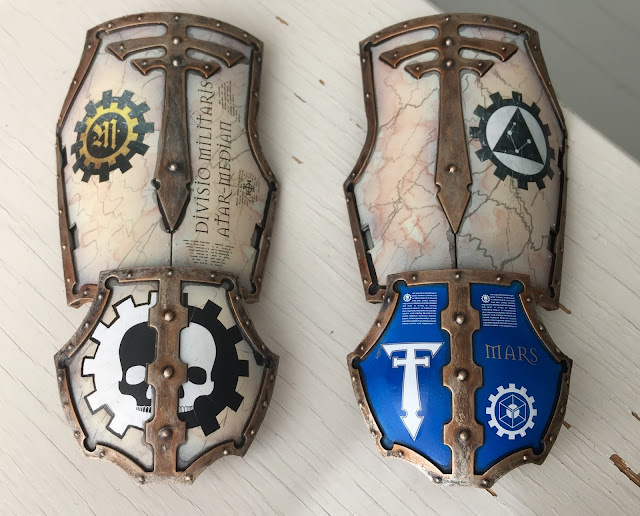 It is great to see the close ups on this engine too!

So with this project complete we thought it would be a good idea to see how Riku enjoyed the project:

The Rites of Cleansing:
The box arrived containing, what seemed to be a ridiculous amount of resin. This was my SECOND ever forge world purchase. My previous miniature from Forge World was Necron Scarabs so I was somewhat nervous about undertaking this project. I had seen Reaver titans and I really wanted to buy one of them first, but then I saw the Warlord Class released and I knew I had to get one. The journey began then as an idea that one day I will own a warlord class titan. I watched several YouTube videos of the build process and studied several blogs (including this one!!!) to see what kind of tools and equipment would prove beneficial in the process. I can tell you now that you will need some rather unusual tools for this job…

After opening the boxes I was pleasantly surprised with the level of detail all the parts had. But the parts won’t clean themselves so it was bath time for my ”one miniature per year”-project. This is where I got concerned a bit for the first time. Most parts were fine after a soapy bath and good scrub, but some parts seemed odd. They became greasy again after drying and felt very slippery. I had to get some stronger soaps. Luckily I managed to borrow some strong stuff from work and tested it first on the mould gates. It seemed to work and didn’t damage the test subjects. But the parts became greasy again. Despair started settle in and I ordered an ultrasound cleaner in which I could wash the problematic parts. But the greasiness remained. On the plus side I found no notable air bubbles that needed filling up!

It took three weeks of thorough washing on a few parts (very visible parts even) before they were free of all the mould release agent! Having no idea when a Forge World resin part is ”ready for assembly/painting”, I may have gone a bit overboard with this step. I was also terrified I would damage the parts with the stronger cleaning agents but luckily they didn’t harm any of the precious resin pieces. I always tested the cleaning products first on the cutoffs.

This stage took about a month!

”I am now pure and my machine is pure. I am patient and thorough. The rites of cleansing have ended”

The Rites of Construction:
Just when you think ”Finally I can start building this!” you find yourself in your first crossroad. ”What pose am I going to settle with?”. Luckily you don’t pose it right away and you can think about it as you gradually build the shins, the feet, the hip etc. I bought dozens of two-part epoxy glues (JB Weld was mentioned in most places but it seems that it is nigh impossible to obtain it in Finland so I went with ”Loctite” brand epoxies) and several 2-3mm brass rods as I was again paranoid about it falling apart under the sheer weight of itself. And let me tell you that this is a fantastic model to do pinning on! It is truly a joy to reinforce the structure as you can hide most of the pins easily and in someplaces I actually think the designers intended certain parts to cover up obvious pin locations!

The pace of using slow curing epoxy glues brought me down to a 2-3 part assembly/day. I didn’t mind it. It was fun and very meditative. During the second week I came to the following conclusions about the pose.

The legs are a tricky bunch to get the pose right and you will need to come up with a setup to align the pieces while the glue cures. I used clamps and a spirit level on top of the hip assembly to ensure that the hip is level once the femurs are attached.

Big magnets (25kg pull) were used on the torso base plate and the hip to strengthen the joint, provide extra stability for the torso and make it easier to transport in pieces. I used 3mm brass tubing with a 2mm inside diameter on the arm-mounted cannons and the Arioch Power fist for weapon options. The brass tube is there prevent wear and tear on the resin when the supporting brass rod is removed. during weapon changes.

Then I hit my second wall of problems…the torso. Assembling the resin box that is the torso, proved to be quite an undertaking. I am not sure if my parts were slightly more warped than usual but it seemed that I had to do a lot of extra work getting all the pieces to align properly. Several LARGE clamps and a large vat of boiling water was needed before the parts aligned and after that I hit another snag with the reactor ridges on top of the carapace. They had to be taken apart and boiled to warp them into fitting carapace. And even after that some green stuff work was necessary to fill the gaps. This took a while. So much so that I had to take a small break from the project to clear my thoughts.

After 6 packs of epoxy glues and A LOT OF clamping and waiting the warlord finally reached a stage where its sub-assemblies could be primed. This part of the build took almost half a year (I did dawdle a lot with the pose and hesitated several times).

”I know every part of my machine and understand how it works. I have watched it rise from the ground and touch the skies. I am patient and thorough. The rites of construction have ended”

The Rites of Colour:

So when the construction process takes time due to physical constraints (curing times, working on the material). This stage is actually two-part. First you think of a colour scheme for about two months. Then you actually paint it in a few weeks.

I ordered a FW titan transfer sheet and a Legio Atarus transfer sheet. The first being a titan dedicated transfer sheet and the latter just looking the coolest of the loyalist versions. I wasn’t too fond of the Atarus colour scheme and opted to go for something else. I had seen an image of a ”marble warlord titan” in a blog (The God Machines) and absolutely fell in love with the colour scheme. Marble, Gold, Blue, White. It reminded me of my all time favourite colour scheme, the Deathwing Company. I played the heck out of Space Hulk (the 1990 DOS version) as a youngster and every single one of my terminators ever since have had the same colours as the Deathwing terminators.

I tested a few primers and ended up with the cheapest (and best adherence) one. A black automotive primer. I do believe the acetone an xylene were crucial in creating a good surface and adhering to the resin. But you have to be really careful not to overdo it and fill the fine details. I do recommend using something else than grey as it can be a bit difficult to see what areas you have already primed.

The marble: Using an airbrush I painted the main colour (aged white) on pre-shaded parts. After that I did all the gold linings using a brush and Retributor Armor paint. Then I painted the backsides using gunmetal grey and silver on the backside of the armour plates. A layer of Vallejo RC Premium Satin Varnish (I really do recommend this varnish!) was then added. I used a sponge dipped in a heavily watered down mahogany brown to ”dot” the white surface and immediately breaking the stains edges with a clean wet brush. After letting it dry completely I drew ”marble cracks” with a pencil and a 0.2mm ink pen {Great Tip . . . excuse the pun: Drake}.  I definitely cut corners here and I did not add additional cracks with white or brown as the end result seemed pleasing to my eye.

This is really all about coming to terms with what you want and daring to proceed with the painting.

”I have accepted my fate and acknowledge the outcome as a result of my choices. I hold my head high and will never falter in my beliefs. The rites of colour have ended” 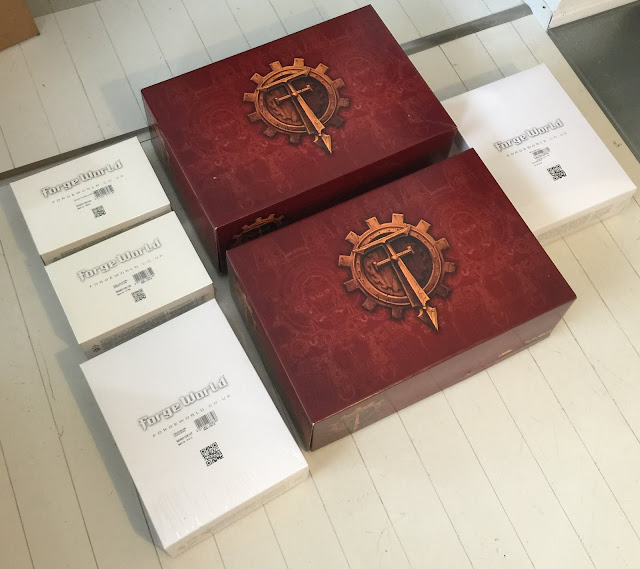 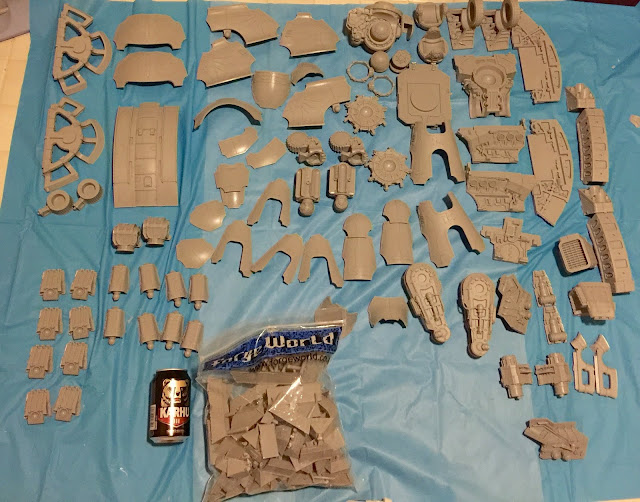 Welcome to the journey! 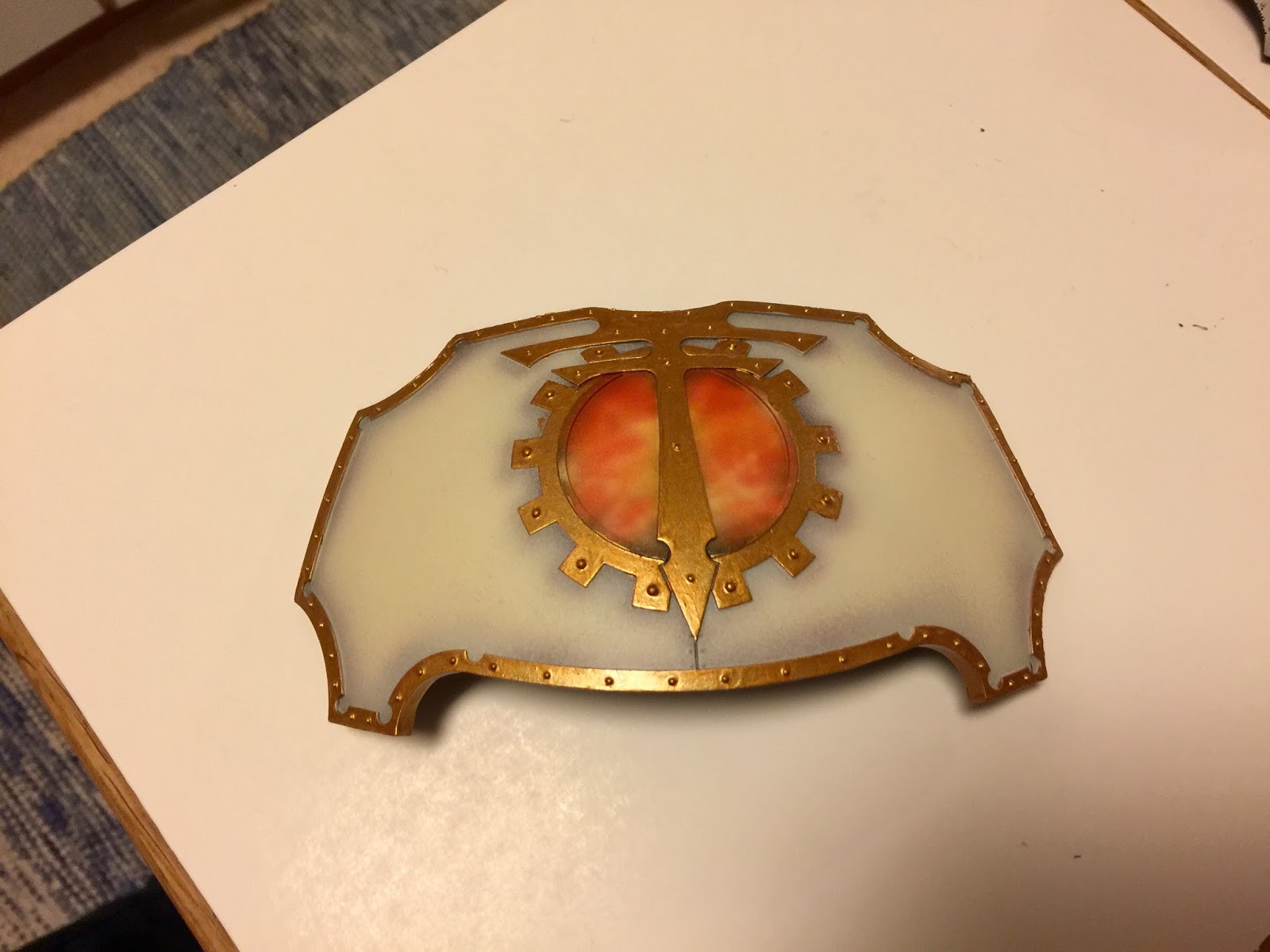 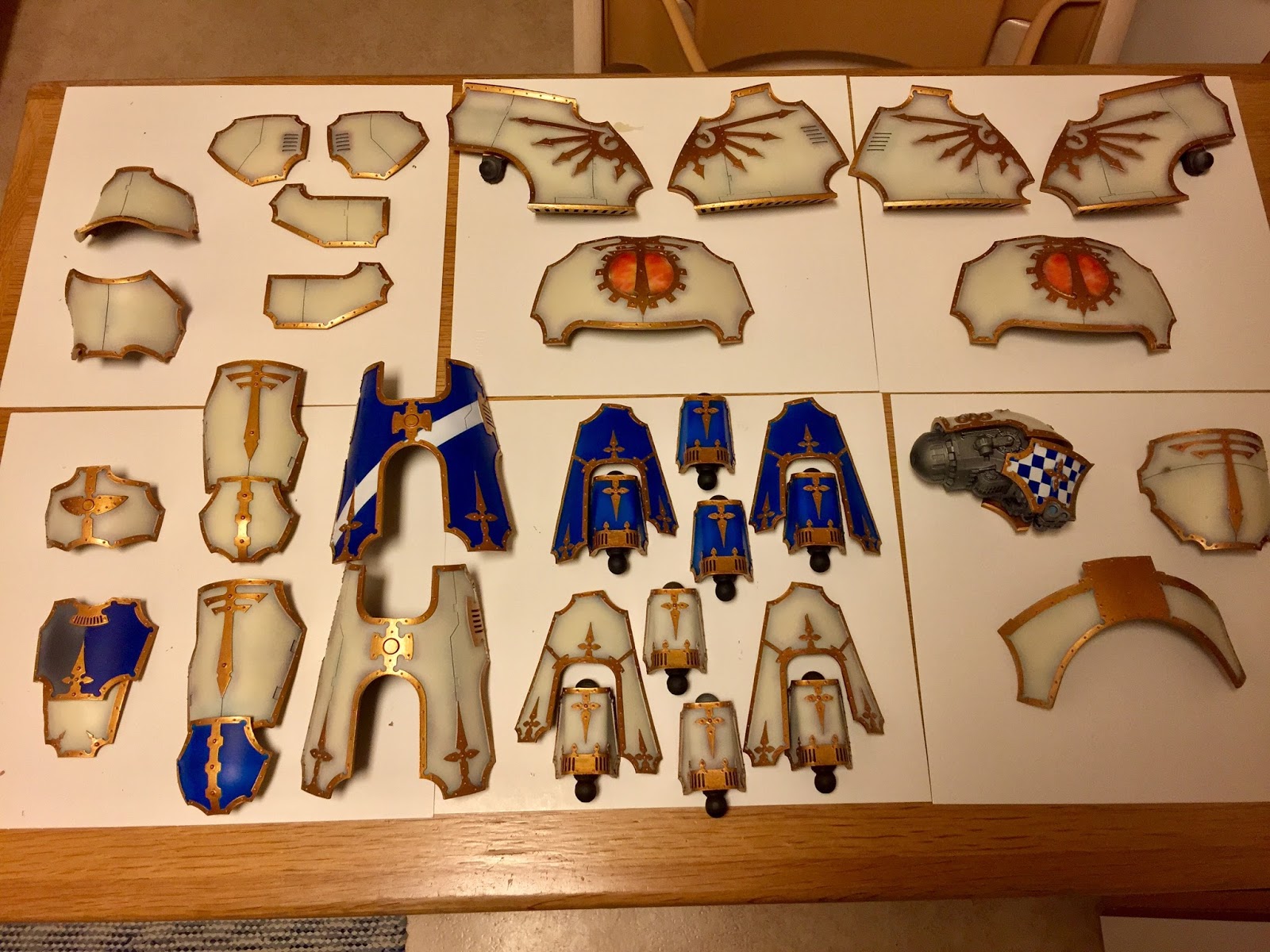 As you can see, it is coming on extremely well. Absolutely beautiful effect with the marble.

The impending Apocalypse of Arctopolis is drawing near and the God Engine must be finished! (Massacre at Arctopolis being an Apocalypse event held by our local gaming group as part of a gaming convention)The marble tower known as Lux Terra has now received the colour palette. Of all the choices I could have chosen, I went with marble.... I hope I don't regret it.

This has been an awesome journey and I regret none of it. The model is superb and instructions are perfect! With this model it truly is about the journey and not the destination. If you have anything to ask about this particular model or anything at all feel free to ask. I am definitely keeping an eye out on this page to see what other titans look like and what their journey is like! The first deployment of Lux Terra will be on 24th of March in ~40000 point Apocalypse game. I will take some photos of the action.

Thanks for the support and all the help this community has provided. It was really helpful!

Thanks for sharing this beautiful Engine!!! Please continue with other Titan related projects!
Posted by Shadow at 14:44:00