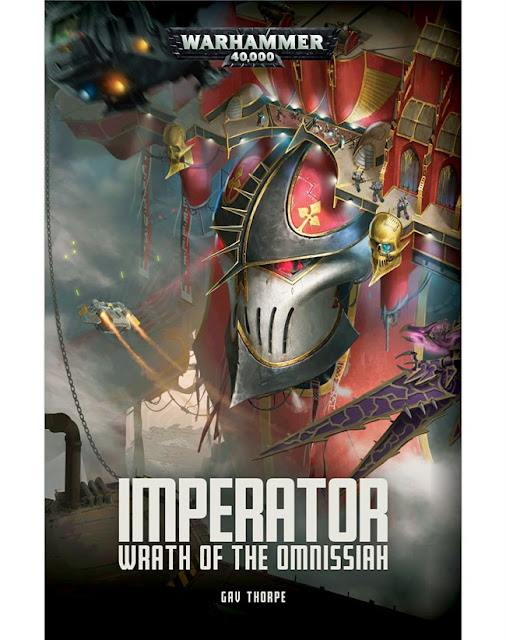 
The Plot:  The god-engines of the Legio Metalica march to war to bring an end to a heretek insurrection on Nicomedua.  The Titan, Casus Belli, and her stalwart crew form the backbone of a powerful battle group, but there is a traitor in their midst.  Faced with uncertainty and doubt, can a young tributai named Ghelsa vin Jaint and the Dominus Imperator, Exasus, end the potential threat to the Casus Belli, or will they speed it along?


Titan Focus: Gav Thorpe returns to the world of Titans and continues the mastery he began with Honour to the Dead.  This time, Mr. Thorpe takes us more than 10 millennia into the future and into the new setting, post-Cicatrix Maledictum.  Imperator is part mystery, part action-adventure, and all intrigue built into a brand new story.    Surely, nothing could lay low an Imperator Titan but another of its kind or an impressive battle group.  That idea is put to the test as a tributai of the Casus Belli finds herself embroiled in a web of lies, deceit, and uncertainty.  Imperator blends the human element into the operation of a Titan in ways never previously explored in depth.
The Titan Manifold is less prevalent in Imperator than other major Titan literature, but this is replaced by the interactions of the Princeps and the Titan’s prime Magos within the noosphere.  The novel explores the relationship between the Princeps, Moderatii, and Titan in new ways, while giving a glimpse at how the Tech Priests of the Mechanicus interact with the favored children of the Machine God.  The novel explores a deeper relationship between Tech Priest and Skitarii as well as their ongoing role in the protection of the Titans.
New to this novel is lore on the crews of the Titans beyond the command crew.  Previous lore has focused on the beating heart of the Titans, the minds that power it, and the servitors.  However, Imperator devotes a large presence to the human contingent that allows such a large engine of war to operate in the field.  The human serfs and lower tech priests that repair the Titan and perform battlefield maintenance are given a large amount of attention in the novel, and their culture is explored.  Yet, for the very human elements of the story, the Titan is what defines their world and this comes across quite well in the story.


Score: 4.5/5 Cogs
Final Thoughts: We’ve seen the Emperor-class Titan in many audio dramas, and occasionally in novels.  The Casus Belli is a beloved engine from the days of EPIC, but never before have she and her human crew gone under the microscope.  To see the immense scale of an Imperator’s power was a real treat in this book, and the human element was drawn into sharp focus without overpowering any other element of the story.  The novel was extremely well written and adds plenty of new lore to a Titan class not often mentioned, while staying true to what came before.  This book is worth a buy.
Posted by Shadow at 13:37:00