Some inventive solutions to Titan building and a very rich paint scheme drew us to speak to Nathan, the owner of Regalius.  What does he have to offer in this interview?

TOC: A Princeps with a beautifully named Walord and a custom Legio to boot.  What made you decide to join TOC?
Nathan: My dad came across the website shortly after I had started to build my Warlord.  It seemed like a really cool place to learn from and see the works of others.
TOC: And the Warlord is your first Titan based on what we have.  What made you start with that Titan?
Nathan: I was playing Warhammer 40,000: Space Marine.  In that game part of the story is keeping an Ork invasion from looting the Warlord Titan Invictus.  The point when you see the Titan yourself is what made me want to get a Warlord of my own one day.
TOC: And what inspired the Titan's name and Legio?
Nathan: I had a color scheme in mind since before I bought the Titan. Purple and gold, to me, have always seemed like colors of royalty or high stature.  So the name Regalius came about after a little bit of research with Latin.  As for the Legio, I wanted to pick a Legio that didn't have a documented color scheme so I could put my own on the Titan.  The Legio Decimata is featured in The Beast Arises novel series, which I had been reading at the time, so I went with that Legio. 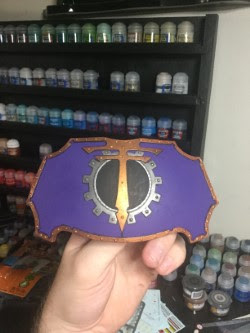 TOC: You're definitely looking to blaze your own trail.  What have been the joys of Titan ownership so far?
Nathan: Building this massive miniature and seeing it take shape was the most fun part for me.  The whole project has been very enjoyable.
TOC: What do you ultimately wish to get out of having a Titan?
Nathan: I would love to field the Titan in a tabletop game one day, but I enjoy building and painting miniatures most of all.  To me owning something like a Titan is like someone owning a car that they spend a lot of time and effort to make look good.  I've also had the thought of doing commissions for people in my city, or even opening a tabletop hobby store of my own one day, and the Titan is the biggest test of my skills so far.
TOC: Any plans to do other Titans later on?
Nathan: My next one will likely be a Warhound, but I have been looking at Eldar Titans as well.
TOC: A love for all things large, then?  What is it about the Titans that is so appealing?
Nathan: The sheer size and what they represent in the 40k universe is what I love the most. 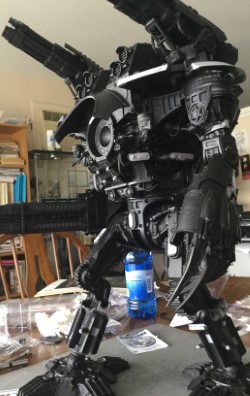 TOC: Do you feel they live up to their established lore?
Nathan: Absolutely!  They're incredible on the tabletop.
TOC: What’s your favorite Titan story?
Nathan: When the Imperator Titan Dies Irae was destroyed.  It really captures how powerful Titans are to me.
TOC: Do you hope to eventually tell such stories of your own, or is the hobby aspect the more preferred part?
Nathan: Maybe; I had never really thought of making my own stories.
TOC: What do you hope to add to the community?
Nathan: I suppose inspiration to fellow Titan owners.
TOC: There's a lot going on with Titans with the changes from 8th Edition all the way to Adeptus Titanicus.  What most excites you about the future for Titans?
Nathan: I haven't really dealt with Titans in the 7th edition, so I don't really know what to expect.
TOC: And a last, but always fun question.  Any shoutouts, words of advice, or bellowing challenges?
Nathan: Purple is the best color
TOC: Thank you for your time.
Nathan: You are welcome. Thank you for having me in TOC.