Sir Trey of Louisiana joins the ranks of the Scions today with his Banner of Freeblades. - TOC 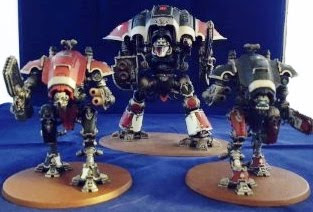 Rex and his Bondsman and Bondswoman

The Knight Errant known as Rex is a Freeblade that has a very interesting relationship with the battlefield. This warrior has been known to set his sights on a target and not stop until he has accomplished his personal goal, always getting into the fight. To date, the Freeblade’s most noteworthy kill occurred while assisting the Grey Knights, the Orks of Waagh Deff Dakka, and the Lions of Gladius, a successor chapter of the Dark Angels. During the battle he fought against the Orks of an unnamed Waagh and the Aeldari of an unknown Craftworld. 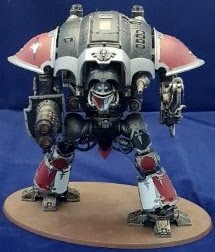 Rex set his sights upon a Squiggoth that somehow earned the unfortunate name of Squiggles after the battle. The Freeblade strode across the battlefield to meet the beast, which was transporting a unit of Tankbustas that would destroy his allies’ armored support. Rex met the Squiggoth head on, inflicting deep wounds upon the beast when he met the beastand rammed his reaper chainsword down its throat. The damage done was so great that his Knight could not be cleaned of the gore, requiring an entirely new coat of paint.

While no one knows the true reason why the Freeblade has recently been spotted with two Armigers in his company speculation is spreading. Aside from Rex himself, only Celana knows his true intention.

When it comes to the two Armiger Warglaives that accompany Rex on his crusade, he places the most trust into Celana. Before she was a pilot, Celana was merely a commoner of the Imperium. It wasn’t until a fateful day when Celana was given the chance to prove her abilities. Her homeworld was invaded by an unnamed Chaos warband led by a Renegade Knight. Many guardsmen took up arms in attempts to hold off their attacks but the Knight’s battle cannon tore through the wall into their city. A contingent of the warband made it through the destroyed section and attacked civilians. 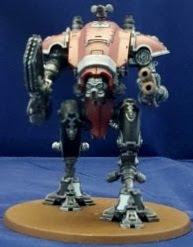 Celana decided to take a stand and urged her fellow commoners to take a stand as a small resistance force. The force rallied behind Celana, all in hopes to give their fellow brothers and sisters a surviving chance. Just when all hope seemed to be lost as the Renegade Knight closed in on the city, Celana laid eyes upon her city’s savior, the Knight Errant known as Rex. It spurred Celana onward to hold the line. After Rex’s defeat of the fallen Knight and helping to ensure the safety of the city, Rex exited his machine. Celana looked upon him in a look of admiration and deep respect. When Rex asked for the leader of that noble stand, the surviving members all pointed out Celana. Impressed and proud of the courage and battle prowess in a tight situation, Rex offered her a chance to join him and pilot an Armiger Warglaive. Celana accepted without hesitation. 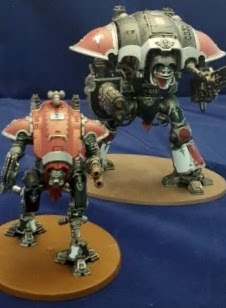 Celana, Rex's first apprentice and the only person he really confides in.

Unlike Celana, Kayde was trained from a young age to pilot his Armiger alongside his brother as part of a noble Household. For Kayde, it was all in hopes to one day take over his father’s Knight despite his low-ranking status. While Kayde showed immense potential and aptitude, his age and personality made him cocky and arrogant.

The young pilot approached every battle thinking himself invincible with his Armiger and it cost him dearly. As Kayde fought in a battle with his brother, they were assaulted by an Ork raiding party that sought to take the Armigers for their own twisted schemes. Kayde held his own, battling as a solo warrior instead of with his hunting partner. Kayde’s brother, however, paid the price for this arrogance, succumbing to a unit of Mega-Nobs who tore the Armiger apart. 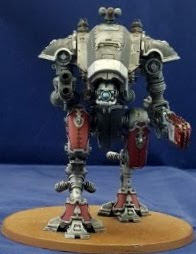 Kayde continued to fight, unaware that Rex and Celana had been observing the battle and knew he was about to be over-run. The Freeblade and his bondswoman jumped into the fray, mopping up the rest of the Orks. Following the battle, Kayde boasted and gloated about his survival, unaware of his brother’s fate. Celana broke the news to Kayde about his brother’s death, and was shamed further when his Household disowned him and told him to atone for his sins or not return at all. Sensing an opportunity, Rex told Kayde that he would join the Freeblade and his bondswoman, and that Rex would teach him humility and respect. In the time Kayde has been with Rex the Freeblade refuses to call him by his name, referring to him only as “Squire.” 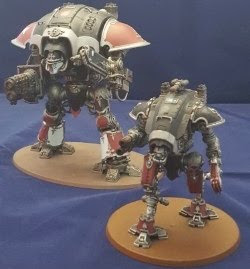