Owner of two of TOC's oldest engines, two Warhounds, a Reaver, a Warlord, and a shiny new Warbringer, we managed to get Siph in the hotseat today. His beautiful Astorum engines and his work on the WeeMen have been a fixture over the years and it's time to pick his brain.

TOC: Thanks for sitting in with us today, Siph.

Siph: Absolutely no problem Shadow. Glad to have my interface manifold scrubbed.

TOC: You are buried deep in the Manifold and it seems quite Titan-mad at that. Five engines is quite impressive, and of coursed decked out in the blue, yellow, and gold of Astorum. What made you choose them as your Titan Legion?

Siph: I’ve always liked the Warp Runners scheme since the original Adeptus Titanicus from my childhood.  The large eclipse motif and the flames look great, whilst the blue and gold is classic and regal. I thought it was rather fitting for these God-Engines. What finally made up my mind were the Siege of Vraks Forge World (FW) books where Reaver ‘Honorum’ (MRT10) and Canis Praetor (MWH2974) both appear. It’s easier to commission somebody to paint from a picture that already exists. 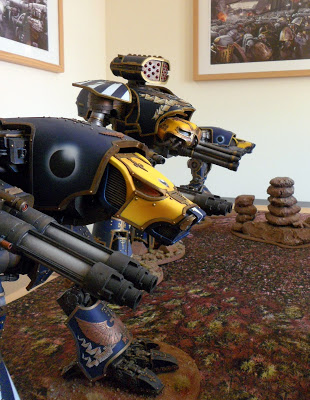 TOC: Is that book what inspired your overall maniple, or just a portion of it?

Siph: I think that helped start me on the journey of Titan ownership.  Now they forge their own narrative.  The release of the Reaver from FW was what finally pushed me into Titan ownership.  Who on earth wouldn’t want to own a Reaver? It’s the finest sculpt by far; it’s beautiful and I was hanging off the phone on the day of release!

TOC: Is that why you have the most ancient of the Reavers on the blog?

Siph: Yes. I pestered Wil Hayes at Gamesday (Warhammerfest) and phoned FW on a few occasions to find out what day release day was and then took that day off, phoned immediately and secured two... MRT10 and MRT11... that one went to my bestie Lord Halfpenny!

TOC: And how did you end up with MWH10 since MRT10 was your first Titan?

Siph: Absolutely by chance! Ommnissah willing! I saw it on eBay, no idea of certificate number.  It was a good price and imagine my joy when it arrived, completely unopened, unused, and with original certificate and packaging.  It even had the original rubber cables, now replaced on modern Warhounds with resin pipes.  I tried securing WLT10, but only managed No.104. 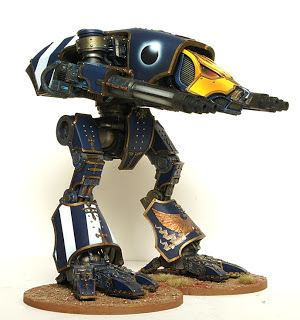 TOC: You have quite the intense love of Titans. What started it? Reading Vraks, or something else?

Siph: My love of Titans started from reading the lore back in the day; the epic battle of the Emperor’s Palace with Titans guarding the gates and striking out from the walls, then looking at White Dwarf battle reports of Epic.  The original release of Adeptus Titanicus presented 6 beetle-back Warlords and a plethora of weapons and void shield tracker on the base - I was hooked!

TOC: How much EPIC did you play? And what do you think of the new Adeptus Titanicus?

Siph: I had a Space Marine army, a Titan Legion, and a Squat army. It was a great game to play, a few friends at school also played so it was nice - none of us back then painted anything though, so it was more board game than Miniatures hobby. That came later. The new Adeptus Titanicus looks great! I’m watching WintersSEO AT Battle reports currently, and TOC Drake is basing the next TOC Walk UK on AT ruleset.  Lord Halfpenny and I will be getting our minds around the mechanics beforehand. With AT its nice not to be all about the ‘D’, you need Shield-stripping weapons too, as well as the reactor-draining Titan-killing weapons. The repair claves and reactor management add a new dimension to gaming with God Machines, so I am very much looking forward to playing.  I purchased AT this time around, but I barely have hobby time for 40k without adding Space Hulk, Necromunda and AT to the mix... bring on retirement!

TOC: And you can hear it here first, the Walk 2019- USA is also Adeptus Titanicus!
Is it safe to assume you also play Astorum in Titanicus?
Siph: I will eagerly ingest that Titan battle report from TOC USA Walk! I did when young, but not painted! Just the pre-printed banners etc. However, I’m tempted to echo my 28mm Forces and make a small Dominus Victoria and Honorum in AT scale, but part of me also says maybe variation would be good. I really like the Mortis scheme—black, red, and gold with white decals is equally striking. Undecided as yet... convince me readers! 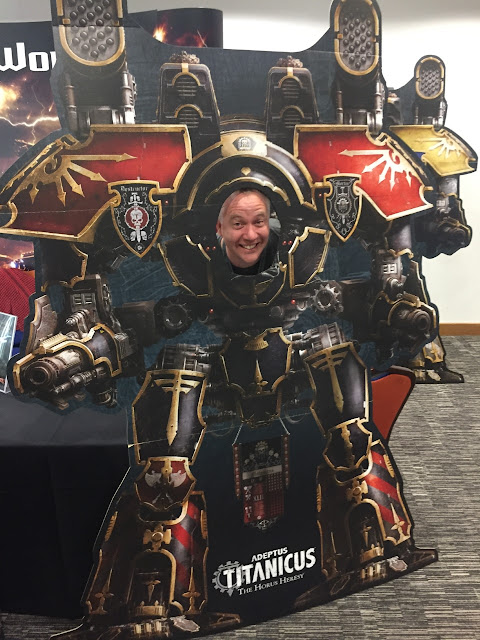 TOC: You heard the man. Hit up the comments and convince him.
How much does the lore influence your decisions?
Siph: In 40k a lot, with the Titans less so. I’m really enjoying adding to my Maniple the more I battle with them at TOC Walks.  It’s probably been some of my most enjoyable gaming of all time! My 40k Knights follow suit and are ‘Consorts of Legio Astorum’.  My Space Marines are Relictors, so lots of skulls, spikes, and chains but no Primaris as they have been Excommunicate Traitoris in the Inquisition’s eyes. My Primaris Force is urgently-needed reinforcements for the devastated Scythes of the Emperor, and my Genestealer Cult are Hivefleet Kraken Vanguard for that reason.  I’ll add Titans when and where I forge their narrative, so Maniple composition won’t reflect a particular lore.

TOC: The lore helps, but the Titan narrative comes from your games. That is a very nice touch.
It will be interesting to see how your Warbringer will fit in and the stories it will tell.
Siph: Yes, it will no doubt gain some kills from the ranks of TOC Member Lyden P’s Legio Fureans traitor Engines! His huge Maniple are my sworn enemies (Lyden P isn’t though!) I’ve already decided on an Engine name Vesuvius on account of the huge destructive central gun.  I was recently in Naples with work and Vesuvius was in full view of my accommodation window! It’ll probably have to have two Volcano Cannons now, too.

TOC: The joy you take in your Titans is evident. What do you hope to get most out of Titan ownership?
Siph: To start it was the mere ability to own the ultimate hobby Engine.  They take pride of place in my games room cabinet, but now more so. Being part of TOC has opened the door to a great community and the best meet-ups with like-minded Titan owners. Anyone owning a Titan is a dedicated hobbyist, not a power gamer; they take time, effort, and resources to construct, store, and transport! Those people I get on with.
Actually using the Engines is so much more than just storing them.  It’s awesome letting the firepower let rip!

TOC: And what do you hope to add to Titan ownership?

Siph: I want to add more Battle Honours to my Engines.  That, and I like the challenge of building these huge kits; I want to add completion of a Titan from start to finish to my ownership.  Rich Gray painted mine, so as much as I love Honorum, Canis Bellum and Canis Praetor - Dominus Victoria will be all me.
Since the Interview Siph has enlarged his Maniple now with 7 Titans completed and 3 more in Build!

As for others, hopefully sharing our exploits and step-by-step construction guides will help people take that final plunge and get one of these glorious God Engines. They won’t regret it! 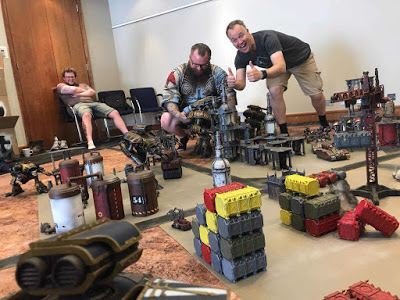 TOC: What do you think is the best part of owning, painting, or building a Titan?

Siph: The best part is battling with them! 100%. You do get a sense of achievement building and painting, and they look awesome in display cabinets, but it’s the getting together with other Titan owners and recreating our own epic conflicts that is the most fun.

TOC: Is there anything for the future of Titans that excites you most?

Siph: The rumoured re-release of the Lucius Warhound excites me; maybe even in plastic as the straight panels lend themselves to that. Currently, more weapon options to fill out the available Index options would be great. The delayed Fires of Cyraxis sometime soon would be great, hopefully with updated points and the opportunity to field my Mechanicum units in 40k.

TOC: And the last, always fun question. Any shoutouts, advice, or bellowing challenges?

Siph: Yes, shoutouts to my Loyalist Brother Princeps Lord Halfpenny, King Fluff and Col H; and bellow a challenge to the Traitor Princeps Lyden P. and Drake Seta - Honorum will be reinforced with the might of Dominus Victoria and you will hear them speak the Emperor’s wrath in fire and destruction of your puny Engines! Ave Imperator!

TOC: Thank you for your time. It's been a pleasure.

Siph: Thank you Shadow, and a personal thanks for spending the time on Titan outreach and to all at TOC making this part of the hobby a community.