Owner: Simon C
Location: UK, Kent.
Comments: Nuncio Mortis “Messenger of Death” is the principal Titan of the Legio Fureans Maniple Finis Mundos “Enders of Worlds”. The Maniple commander, Solaria Tannin, became permanently bonded to her Titan with her crew during the events of Beta-Garmon in the Horus Heresy. Devoted to Khorne, the crew were slowly subsumed into the Titan itself. Whilst not physically marked out as a Banelord class Titan, the devotion to Khorne is clearly visible in the Maniples tactics. The Maniple modus operandi is influenced by the manner in which it has served the Traitor forces.

Finis Mundos has deployed alongside the Night Lords and this is seen in its tactics of identifying an enemy Warlord Titan and prosecute it with extreme violence before withdrawing to assess the battlefield for its next target. Solaria chooses to send the supporting Warhound Titans to push forwards and abuse the enemies unprotected areas, drawing fire whilst Nuncio Mortis advances on the hapless victim unobserved. Once close in, Solaria Tannin uses the Bellicosa to fire at almost point blank range through the rear of the enemy Warlord, crippling its Enginarium before using the Arioch power claw to remove the head and crush it, and its helpless crew in its closing talons. Whilst this act was ongoing, the Warhounds scout for their next victim, feeding the information back to Solaria for target prosecution.

There have been several instances where the Maniple has been directed by the Warmaster to support the Night Lords on missions to secure worlds or fortress-hives. When conducting missions such as these, it is noted that the Titans generally drop close in to their target and remain static for a significant period of time using their mere presence to sow fear and threat in the defenders. The Maniple is known to sound its war-horns as Night Lords Storm Eagles and Night Raptors scream down through the skies, as if heralding the arrival of dark times for the world. This display of static threat is then brutally ended with the discharging of Nuncio Mortis’ Bellicosa and the Maniple advancing to destroy any enemy in their path. 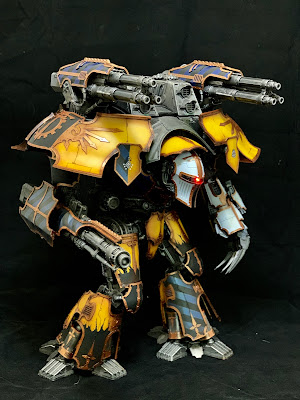 A fantastic looking Engine from Legio Fureans, note the flame work on the leg greave and the sharp striped armour. 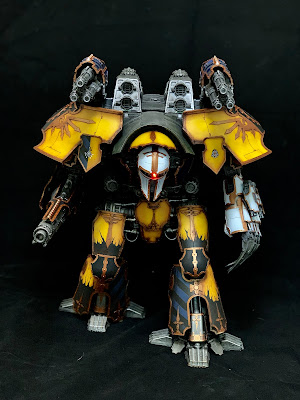 Simon has used a red LED in the face plate and rear armoured deck to great effect. The white armour panels mark this out from the other Fureans Engines like Lyden P's many engines. 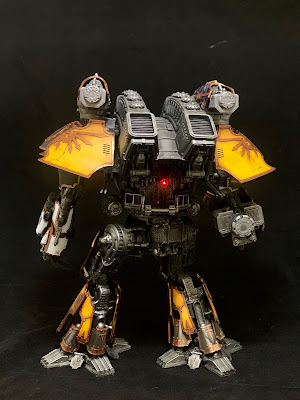 Great work from every angle and a solid stable pose. The armament suits the Fureans tainted Khorne tactics of getting close and ripping face! The Arioch Claw and Mega Bolter would make a mess of many Engine up close. 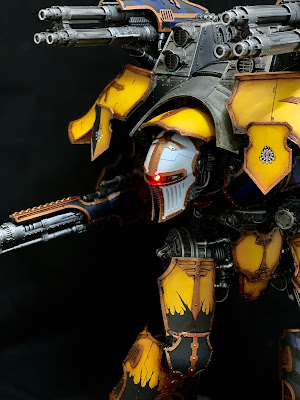 Thanks Simon for sharing with us at TOC and many congratulations for completing this mighty Engine, we look forward to seeing it in person at the next UK Walk perhaps?