Welcome back our fellow Princeps, as we continue the coverage of the new Imperial Armour Compendium.  Our sincerest apologies that there was a couple of days’ break between articles but there were some things that came up, preventing us from continuing our reviews.  Let’s proceed with the dark mirror of the Titans fielded by the Imperium, the Heretic Titan Legions.

So, what’s different?  This isn’t an exaggeration, but feel free to read our initial article.  We really aren’t joking; we’ve already covered your changes in an unexpected way.  Your Titans are EXACTLY the same profiles as the Imperium Titans and you have the <HERETIC TITAN LEGION> keyword instead and don’t gain access to the Secutarii as a result.  You also have the TITANICUS TRAITORIS keyword instead of ADEPTUS TITANICUS.

There was a time that Chaos Titans could be dedicated to a specific Chaos diety, with Nurgle and Khorne usually being chosen due to the extreme durability or sheer damage-dealing, respectively.  Sadly, the god alignments have still not returned to Chaos Titans in 9th. 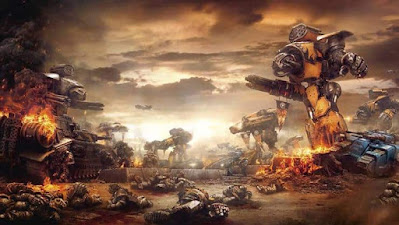 Is There Anything Different Compared to the Imperium?

No.  Your profiles are exactly the same as the Imperium Titans and it’s literally just those keyword swaps.  You also lost the BS2+, your T values changed, but at least your weapon profiles have gotten better and your wounds counts spiked.  You also got the same reduction in Power Level and points.

This is probably the most of a downer of an article that TOC is ever going to do and that’s not because we hate Chaos Titans, but because this new book has made Chaos a carbon copy of the Imperium (or vice versa, depending on where you stand).  To that end, we figured we’d address a few more things in depth to help clarify some things that have been floating around the internet lately or that we haven’t previously covered.

Icon of Imperial Might and its Chaos Equivalent are gone.  You now get “Battle Titan” or “War Engine,” respectively.  These rules allow your Titan to Fall Back and then charge in that same turn if it’s eligible to do so.  You can also ignore other models when you move, advance, or fall back so long as it’s not another Titanic model you’re moving over.  No ‘gaunts will be holding up your movement. 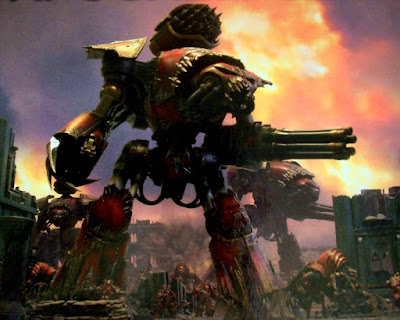 Void shields have been a very interesting subject dominating the discussion right now.  Our initial review, as per our usual, did not go into great detail since it’s not our style to just give a full rule.  However, we’ll expand upon it a little bit more here.  Each Titan class gets x number of shields, such as Warhounds getting two (2) and Warlords getting eight (8).  Each of those void shields has three (3) shield points that reduce each time the Titan takes damage.  These, in a way, serve as ablative wounds but are not actually wounds.  Further, these shield points rely on damage, not wounds, and every three (3) damage pops the shield, with excess damage being lost.  Your new void shields also don’t stop Mortal Wounds like the old version.  This is very much like the Titanicus system.  Non-lost shields are restored each Command Phase, but once you hit zero shield points on an individual void shield it is lost for the remainder of the battle and it does not regenerate.

We wish there was more to offer on the Chaos Titans and more options that they had available to them to pair with since they can’t take Secutarii but this is their current setup.  As we said in the previous article, there is hope that maybe White Dwarf will do an Index: Heretic Titan Legions later that may add Legion Traits or offer new rules and stratagems to pair with these chaotic lords of the battlefield.  Next up: Eldar.