War Zone Charadon is the newest campaign series from Games Workshop designed to bring us new lore and a few army options.  Book of Rust brings updates for AdMech and Knights.  While Legios Morbidus (new to the lore) and Metalica are mentioned there are no rules or extensive lore for them.  Here, we review the Mechanicus Defence Cohort and how it can support your Titans.

The Defence Cohort is a new Army of Renown that functions like the formations of 7th Edition 40k but without the immense power the formations used to hold.  In return for a few restrictions the force picks up some keywords and minor abilities.  A Mechanicus Defence Cohort can never have Skitarii units, so why discuss this when they form the core of how we build our personal Titan Guard?

This Army of Renown relies upon Kataphron, servitors, and Kastelan Robots to get the job done.  All of these support modern lore Titan forces, making them a somewhat thematic choice.  The Kastelan in particular are even stationed ABOARD Imperator Titans. 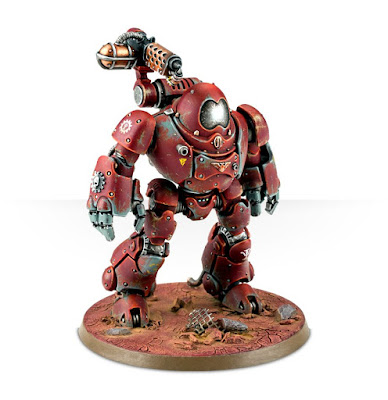 The previously listed units pick up the Extremis Sentinel keyword.  While they lose Forge World Dogmas they also pick up damage reduction while in your Deployment Zone and benefits to being charged, even when not in cover.  This is useful when said units are staying close to Titans to defend them from close assault and gives them vastly increased durability.  This gives players new options to defend their Titans with.
The AoR also lets players take all other AdMech units but the aforementioned Skitarii, providing flexibility and the ability to cover other battlefield roles.  The Warlord Trait even boosts the Extremis Sentinels abilities to hold objectives. 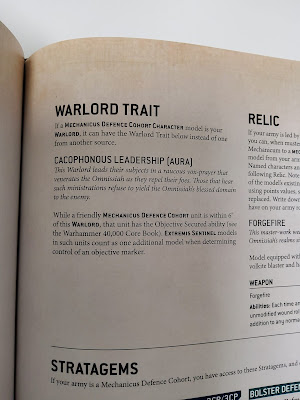 What do you guys think of this Army of Renown.