Hello and welcome to our first of many articles titled Collegia Titanica. In these articles we (Shadow and I) are aiming to review Titans, Void Shields, Battle Engines, Titan Weaponary and even Titan movement, to enable you to get them most out of your table top giants. Hopefully this may help you decide what weapons to load your Titan out with or at least help you choose how best to utilise a firing solution.

Today we start with the Vulcan Mega-Bolter. This weapon is often overlooked in favour of the more deadly Plasma Blastgun and Turbo Laser Destructor, but at the end of the day it simply is horses for courses. 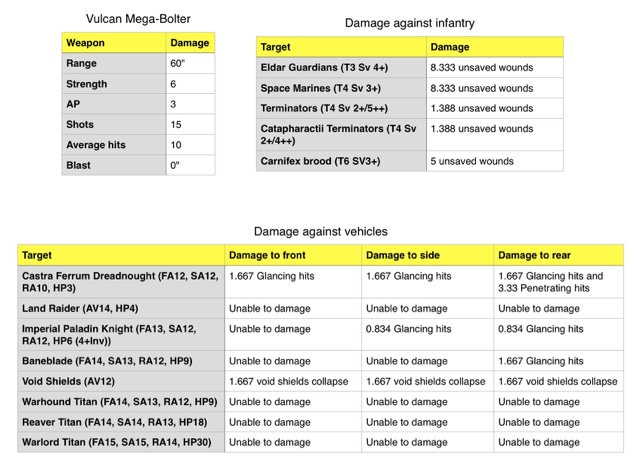 Range: at 60" you are able to shoot up over 2 realm of battle board segments. This immediately places the Engine outside the range of Heavy support squads and most other forms of dangerous Weaponary.

General Effectiveness: Well it isn't the most flattering results you will see today, especially when you compare it to other forms of Titan Weaponary. It can mow through light - medium Infantry units, especially if your opponent strings out his infantry squads to make them less susceptible to blast templates. The weapon does struggle against Heavy armoured troops and I would go as far to say as just charge them instead as you would get a better result anyway.
It eats through monstrous creatures probably better than most other Titan Weaponary apart from Destroyer Weapons.

Effectiveness Against Titans: the best thing to gleam from this is; in a Titan battle, this little weapon has a good chance of stripping down 1-2 Void Shields a turn. This goes extremely well with the fluff as it is recorded that Princeps would use these sort of weapons to batter the shields before firing a Titan damaging weapon like a Turbo Laser Destructor or Plasma Blastgun (in a Warhound's case).

Recommended Deployments: This weapon is best utilised against Forces like Tyranids and Orks, where it can be used to destroy Dreadnoughts, Monstrous Creatures and medium strength infantry units like Tyranid warriors and Ork Nobz / Killer Kanz etc.
It is also effective against Legion / Space Marine forces where the opponent brings a lot of Sv3+ squads. 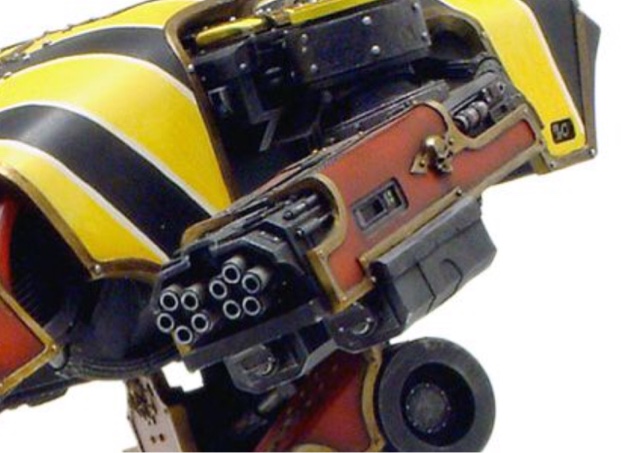 Summary: The Vulcan Mega-Bolter is an effective weapon, but sadly lacks the stopping power of some of the alternative Titan weapons. Generally when a Titan walks, it walks against something almost equally as destructive, so this weapon may not find a place in your arsenal unfortunately.