Titan Owners Club comes back from several Titan updates and registrations to bring you our second interview.  This time, Kaelo (also a member of the Battle Bunnies blog) was gracious enough to pass the time with TOC and talk a bit about his own Warhound and Titan ownership.

TOC: So, I've seen the picture of you kissing the Warhound Titan you have on the nose. It's safe to say you like Titans, I assume?

Kaelo: Haha. Yeah that picture is one of the most looked at images on our blog...it's amazing what draws people in. Drake actually bought me that Warhound about 5 years ago after a long hobby hiatus. We had always wanted to own Titans but they weren't really an option when we were first in the hobby due to cost. Now we are all older and in proper career paths it has become a lot more affordable. I do like Titans, they are phenomenal models and I am currently reading Titanicus by Dan Abnett, which really is a top promotion for the engines. As a gaming unit I am not so keen. 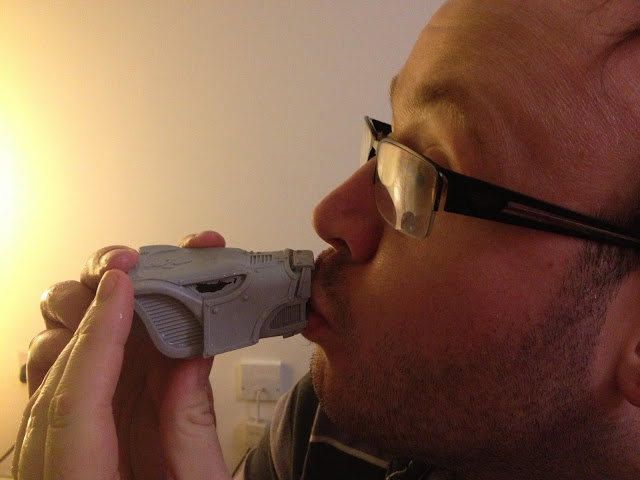 Kaelo certainly loves his Warhound.  In time we'll see it take on the colors of his chosen Legio.

TOC: Titanicus, as Drake himself once put it to me "is gold". It's a very good book and I'd say one of Abnett's masterpieces. You get a real sense for an engine war and how they are fought. You mention liking the look of the Titans, but aren't too keen on them in game. Is it more that you prefer collecting the Titans because you think they look great, or is it something about how they change the game?

Kaelo: I just think that they don't fit with a 28mm scale wargame in the conventional sense. In apocalypse and larger standard games there is probably a place for them but in standard 6' X 4' games I consider that they are overkill. Knights and Warhounds are just about my limit. I will eventually do 1 of each Titan but it is some way off and not a priority.

TOC: Effectively, it's the Escalation style that was fully incorporated into 7th Edition that you aren't a fan of?

Kaelo: Yeah I think so. It's just a bit over the top in my opinion.

TOC: It's been a very hot topic about 7th Edition that has drawn much ire since it happened. You mentioned doing one of each Titan in time. What do you currently have, and what is your ultimate plan for your Titan collection?

TOC: Any plans to do a full maniple for Legio Praesagius? And what is it most you look forward to with this new version of Epic?

Kaelo: I loved that mini Warlord. Once I saw that I was like 'oh yeah! It's on...' I am looking forward to seeing the direction that they take with it. I am really hoping that they go down a Great Crusade route with it. I think I will stick to just the 2 Titans for Legio Praesagius. Although, as I love the fluff I guess anything can happen. Hopefully I win the Warlord in Forge Worlds latest competition.

TOC: Even if you don't though, it sounds like you'll still get the Titans eventually. You really do seem to have the bug for at least having them. What has Titan ownership meant to you?

Kaelo: I'm not sure really. I think that it will be cool once I start them and get them finished. I have so many other projects that it is tough to establish where they fit in to my schedule. I hope that I have one done by the end of the year.

TOC: What does it mean to you to own a Titan?

Kaelo: I think it's a sign of dedication to the hobby or Forge World. I don't think a Titan is more impressive than a fully painted army. In fact, due to the time that goes into them and the use that you can get, I feel a completed army is more impressive if anything.

TOC: I can agree with that actually. The work that goes into a full army does eclipse that of a Titan. How do you plan to unify your Titan with your other forces?

Kaelo: I will do a Mechanicum cohort and some Skitarii/Secutarii once forge world release some rules for it. As Tempestus and Praesagius have very similar colour schemes, the hope is that they could be used for both. I don't see that these will be large forces but I would definitely like to do them. My favourite army is my Ultramarines and the idea is that this will largely be fielded as a 12th Expeditionary Fleet force during the Great Crusade. Both of my Titan legion feature very prominently in this era and also House Vornherr, who had ties with Tempestus if I recall correctly.

TOC: You mentioned the Secutarii, something that I'm also looking forward to quite a bit. What do you hope to see out of them when Forge World makes them? And how do you think they'll behave compared to the regular Skitarii? And it seems that Knights are also on the to do list.

Kaelo: Forge World said that they will have some really cool rules operating around the feet of the Titan, repelling infantry and stuff. It will be really interesting to see how it will all integrate. I hope that the models will be a bit darker than the GW plastics. I like them, just not how I pictured them. Yeah I have 5 Knights for my House Vornherr, I am looking forward to getting round to them. Just waiting on the transfers for my Legio's and Houses.

TOC: How do you envision the Secutarii looking in comparison in order for them to look darker? So far, the Forge World images from the Weekender looked in line with the current plastics.

Kaelo: I would like them to be more like the descriptions in Titanicus. They are more in line with the old John Blanche artwork. The stuff in Titanicus is really cool.

TOC: It is. I take it you're a fan if fluff based models and forces?

Kaelo: I'm completely driven by the fluff. That's how I came up with the name Battle Bunnies. I am not into the whole power gaming thing. It's a game and we play it for our favourite stories to be represented by beautiful and expensive toys that we put a lot of time into. I think that is why 30k has a massive draw for gamers. It's more balanced and targeted at a more mature demographic. The 40k setting - that I was introduced to 23 years ago - is dead to me now.

TOC: That echoes a sentiment I've heard before, without going into details. When it comes to your fluff based approach, how, specifically, will it guide your Titans. That includes names, loadouts, and even the build process if you allow that too?

Kaelo: Well Praesagius were renowned for standing back and using precision shooting against enemy combatants to avoid civilian casualties as much as possible. With my Warhound I will go for the most accurate weapons and probably the ones with smaller templates. Later in the Great Crusade their engines started to adopt more power fists too so I will probably put one of them on my reaver. I certainly won't be shooting any template weapons if there is even a small chance of it killing my own infantry. I wish there was a range of civilian models that randomly operated to give battlefield character...I would avoid them too. I have a few names floating around but as I am entering the Forge World Titan competition I don't really want to throw them around at the moment. The Warlord for Tempestus will have no such restrictions with wargear or operating protocols. I haven't decided on a name for him yet. Maybe Tempestate Oculii - Storms Eye.

TOC: You've definitely given it a lot of thought. Any advice for Titan owners looking to get started on their builds or for those on the fence about getting one?

Kaelo: I think that you need to decide why you want one. If it's just as a display piece then throw your money at a PC monitor until it arrives at your door. If, however, you want it for gaming then maybe discuss with your regular opponents. No point in turning up to an ant fight with a nuke.
Posted by Shadow at 15:06:00

Email ThisBlogThis!Share to TwitterShare to FacebookShare to Pinterest
Labels: Interview