The interviews keep coming, and today we talk to James.  The proud owner of Rex Caelestis, Canis Quartus, and Invictorus; we chat about beloved Legios and challenges that were issued.

TOC: Three Titans, one of each class, and all in the lovely colors of the Legio Astorum.  What drew you into Titan ownership and to take the plunge on three massive kits?
James C.: Titans are one of those models that, whether they are on the shelf or on the tabletop they are always drawing attention. I love the size and detail in the kits. Once I had one I knew I wanted one of each. Plus I looked at these kits as a challenge for my modeling and painting skills. I bought an airbrush setup just to paint Titans. 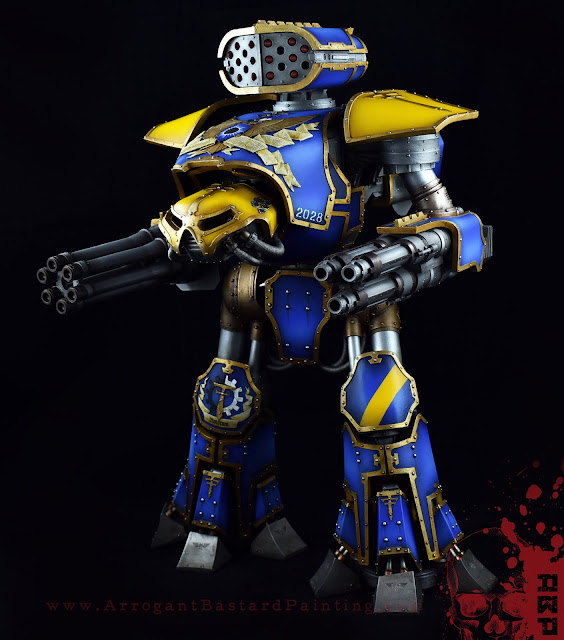 TOC: And what drew you in to the Warp Runners?
James C.: I wanted a loyal Legio that were old. I loved their background and their color scheme. I also like the fact they are the only Titan Legion that teleport into battle. I wish they had tabletop rules for that.
TOC: The fluff was a major factor in your choice, effectively.  What do you say to Jonathan M.'s claim in his interview that all but Mortis are inferior?  And your answer to his challenge?
James C.: A lot of the things I do with the game are based on fluff. I love the fluff of the game and build and paint mainly to it. As to Jonathan M.'s claim that all but Mortis is inferior, he needs to remember who ran to the warp after the Heresy ended. I’ll gladly accept his challenge any day he wants.
TOC: A good answer to his challenge.  It sounds like you have done a lot of research into Astorum.  Is there any particular story that guides you the most?
James C.: Not really. I just read what I find online about Astorum. Hopefully when the Horus Heresy books get to the Siege of Terra they will clarify if Astorum was there, as there are conflicting ideas as to whether or not they were at the Siege. 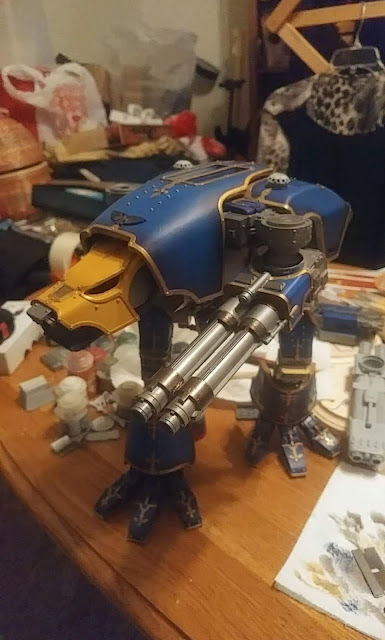 TOC: You're mainly a Heresy player, then?  What often assists your engines in battle?
James C.: I have a Titan Guard/ Mechanicum force that usually escorts the engines into battle.  If not them then the Imperial Fists Legion.
TOC: Do you hope to ultimately recreate the existing stories, or forge your own path through the records lost during those dark days?
James C.: Mainly forge my own path. After the New Year my gaming group hopes to start a campaign.
TOC: And what is the ultimate goal you have as a Titan owner?  What is the mark you hope to leave?
James C.: My ultimate goal was to own a Warlord Titan. Now I just hope that people who see my Titans online are inspired to undertake the challenge of building and painting them as well.
TOC: That second goal shouldn't be too hard, given how good your engines look.  How did you go about setting how you wanted your Titans to fit the Astorum scheme?
James C.: I wanted minimal yellow, so I tried to stick to only the head and shoulder pads being yellow, while everything else is blue. My Reaver and Warhound were modeled off named Titans in the Siege of Vraks. With my Warlord I created its own name and will create its own background. 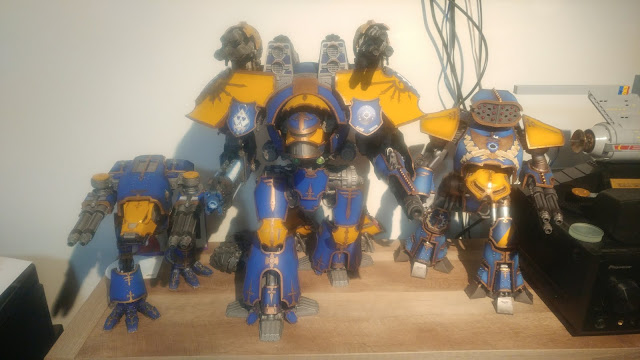 TOC: What does it feel like to own the king of Titan models?  And how do you feel about the journey to come?
James C.: Its feels good. It’s an amazing kit with incredible detail. It was fun to assemble and paint. I’m anxious to get it on the battlefield and watch hordes of enemies die under the blast of it weapons.
TOC: What's been the most challenging part of having a Titan?
James C.: Well, building a Titan is completely different from other kits so it’s a little bit of a learning curve. My Warhound Titan was where I cut my teeth and learned my lessons. The other challenging thing is transporting them.
TOC: And the most fun part?
James C.: Watching them come together. Playing them on the tabletop is fun as well.
TOC: Any advice for current or prospective Titan owners?
James C.: For anyone looking to get into Titan ownership, take your time and do your research. There are plenty of guides online giving great tips on how to build the model for best strength and stability.
TOC: Research has been a key theme for you throughout this interview, both in terms of build and guiding how you handled your Titans.  Do you have a particular favorite story involving Titans on the whole?
James C.: No, not really. Most of what I have read has been on online sites.
TOC: And the last, always fun question.  Any challenges, shoutouts, or last minute tips for your fellow Titan owners?
James C.: Sending a challenge to Jake and his Legio Crucius and also to let Jonathan M. know that Legio Astorum is coming to set Mortis straight on who is inferior.
TOC: Thank you for your time today.  It's been a pleasure.
James C.: Thanks, it’s been fun.