Adeptus Titanicus
Hi all I thought I’d do a quick post about the upcoming release of Adeptus Titanicus. This will pretty much be a meandering wish listing of what I would like to see and what my plans are for at release. I’m writing this as I literally wake up every day annoyed that it’s still July, and currently there is a quiet before the storm aura permeating my existence moment by moment . . . Yes. I am very excited. So let’s get into this. 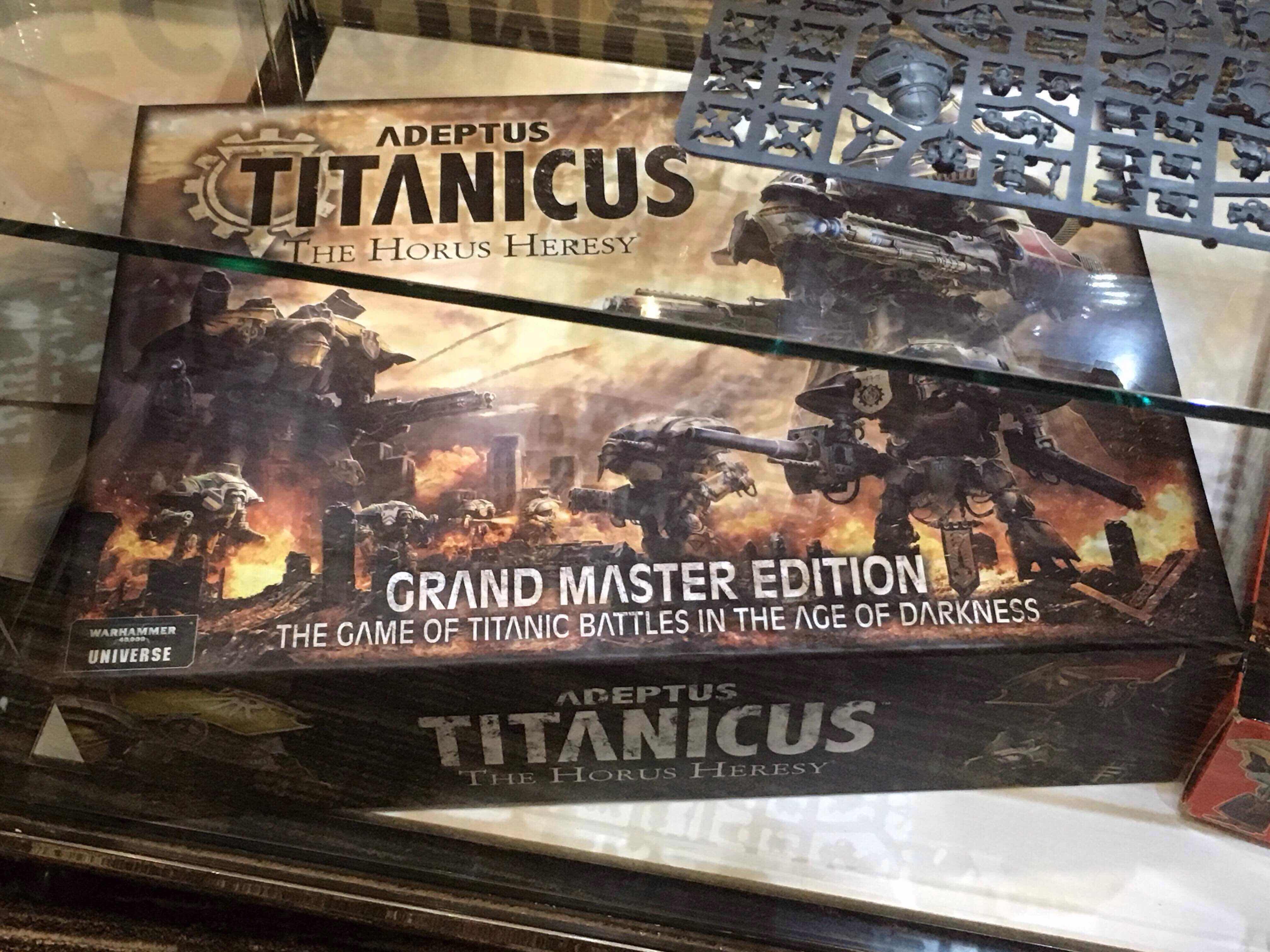 Kits. I am already planning on buying 2.5 Grandmaster boxes with my brother buying .5. This should give me a grand total of five warlords and twelve Knights (all six from the shared set will be going to my brother in exchange for the terrain in the box). The next question is how to assign my five Warlords into the Legios that I am planning on collecting. Most people know that I am Mortis til’ I die, so that is the first Legio I will be collecting. The second Legio is one which has not been seen (so I’m going in blind), but it is one of the Titandeath 10. Guessed yet? That’s right, Legio Defensor. If it comes to it that another member of my gaming group really wants to do it, then I may step aside and do Solaria instead. So my 5th Warlord is going towards that Legio as part of an Axiom Battleline. 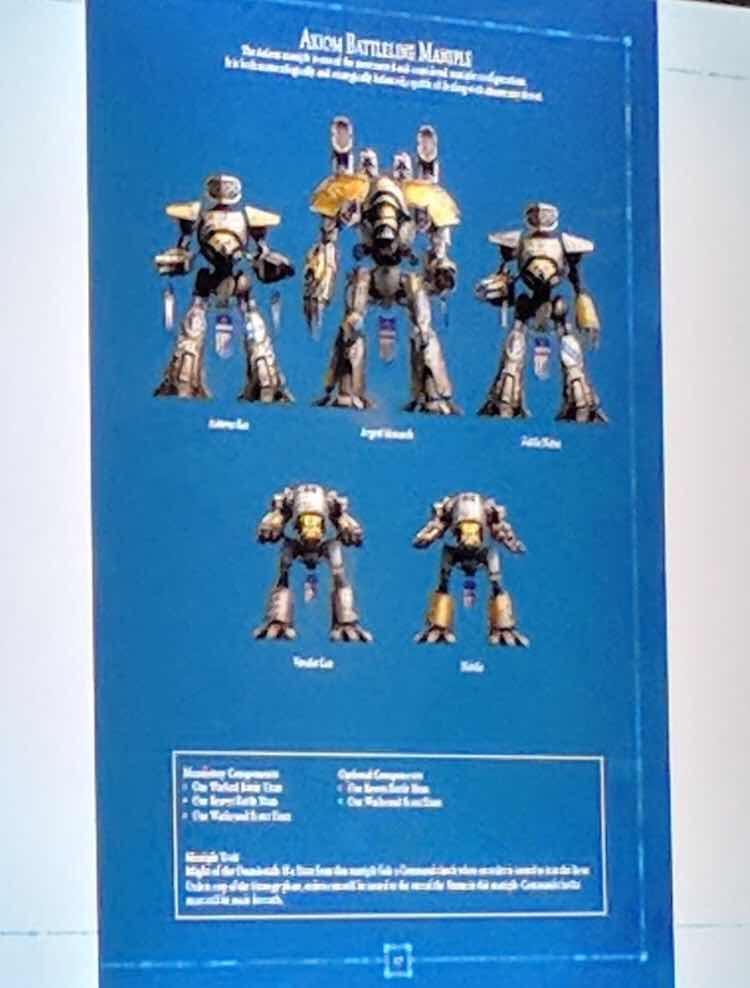 Some of you may not know that there are Command terminals out there for Battlelines, these are like Formations I guess. 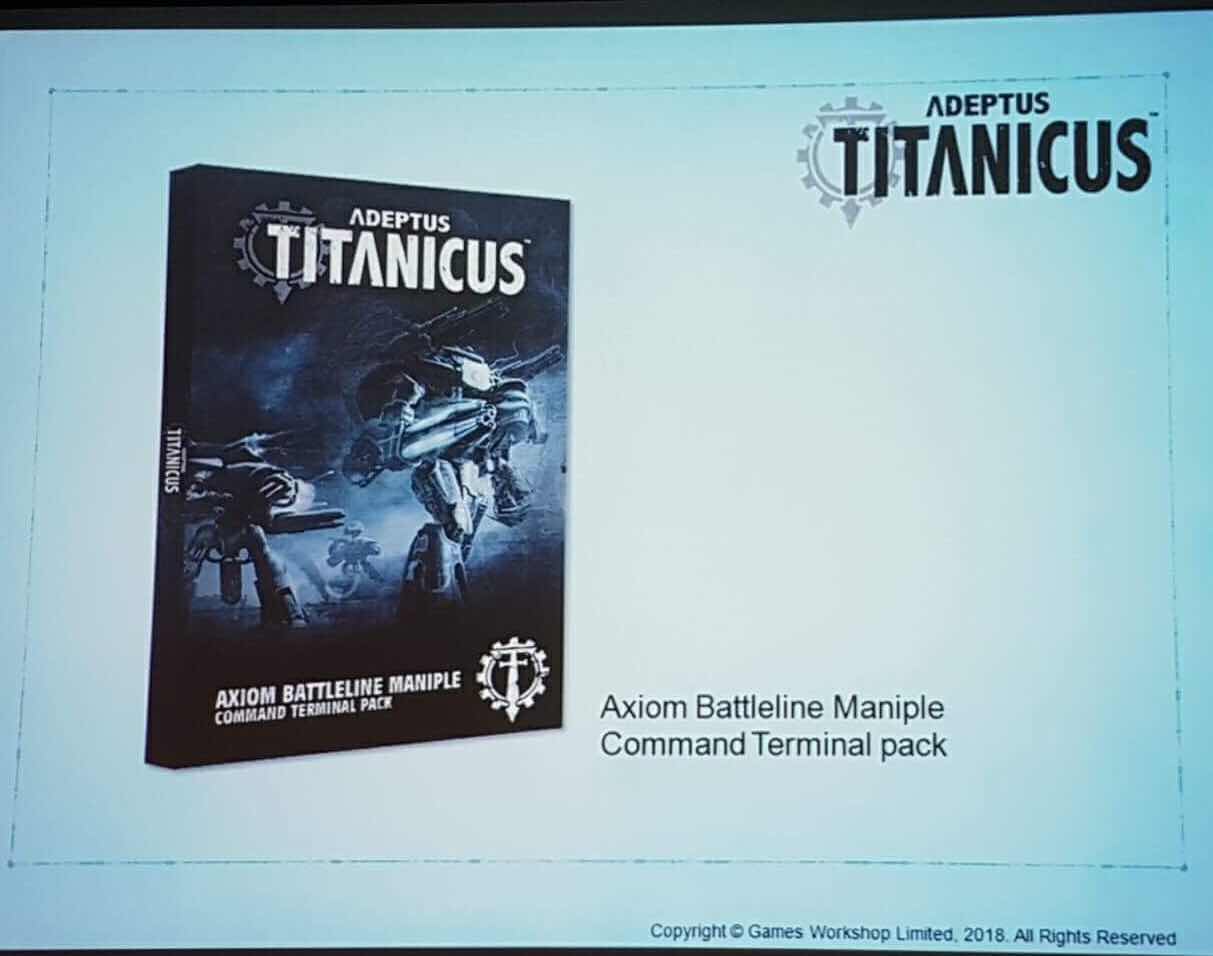 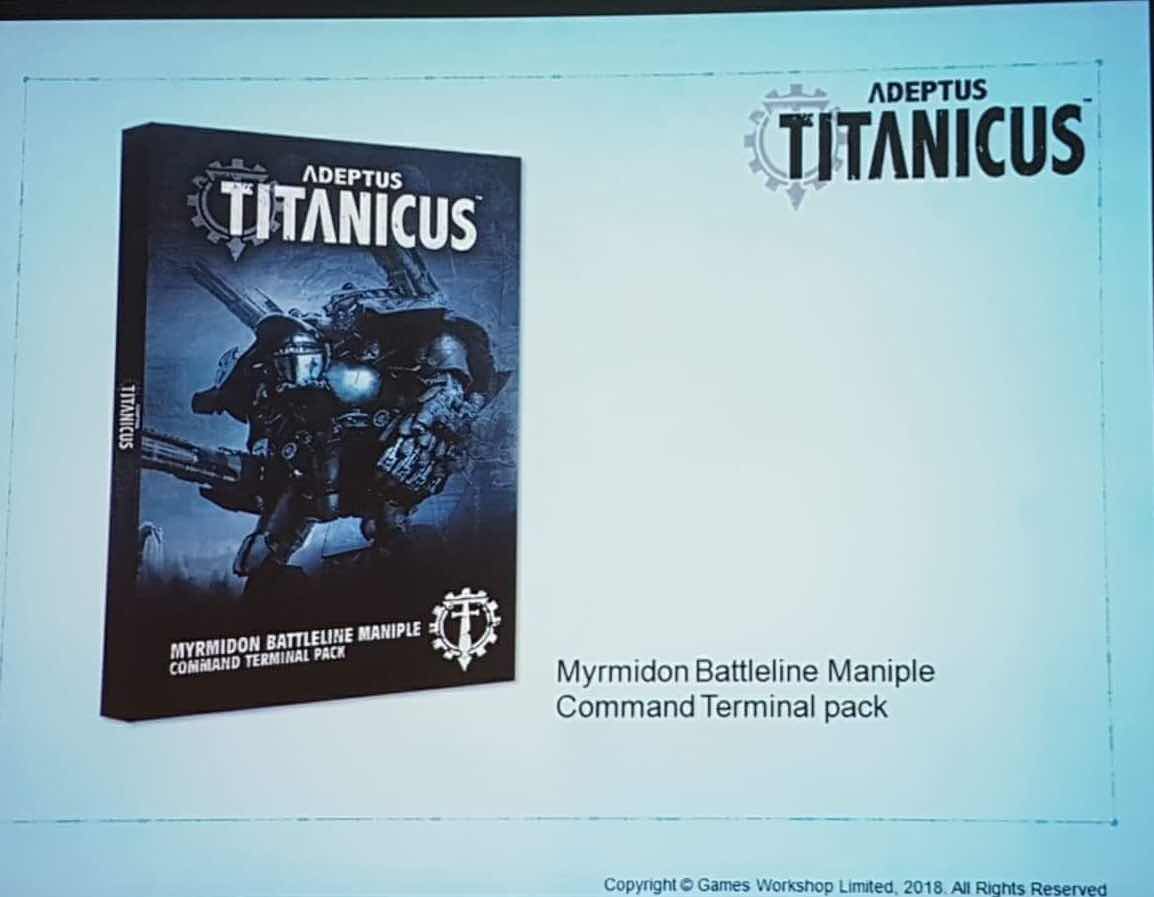 I intend to put three Warlords into a Myrmidom Battleline, and put one Warlord into an Axiom Battleline for Mortis (I need two Reavers and two Warhounds for the Axiom after this to complete the Battleline). It sounds as though this may be a staggered kit release again, with rumours that the Reaver will be released in September and Warhound in October. . .
Questoris Knights. The standard Beetlebacks from GW fame are the initial Knights that are coming out. They only enable you to make a Paladin, Errant & Crusader (or Worden) out of the set (you can’t have 3x Paladins for instance). I am looking forward to the additional variants which are sure to follow in time. 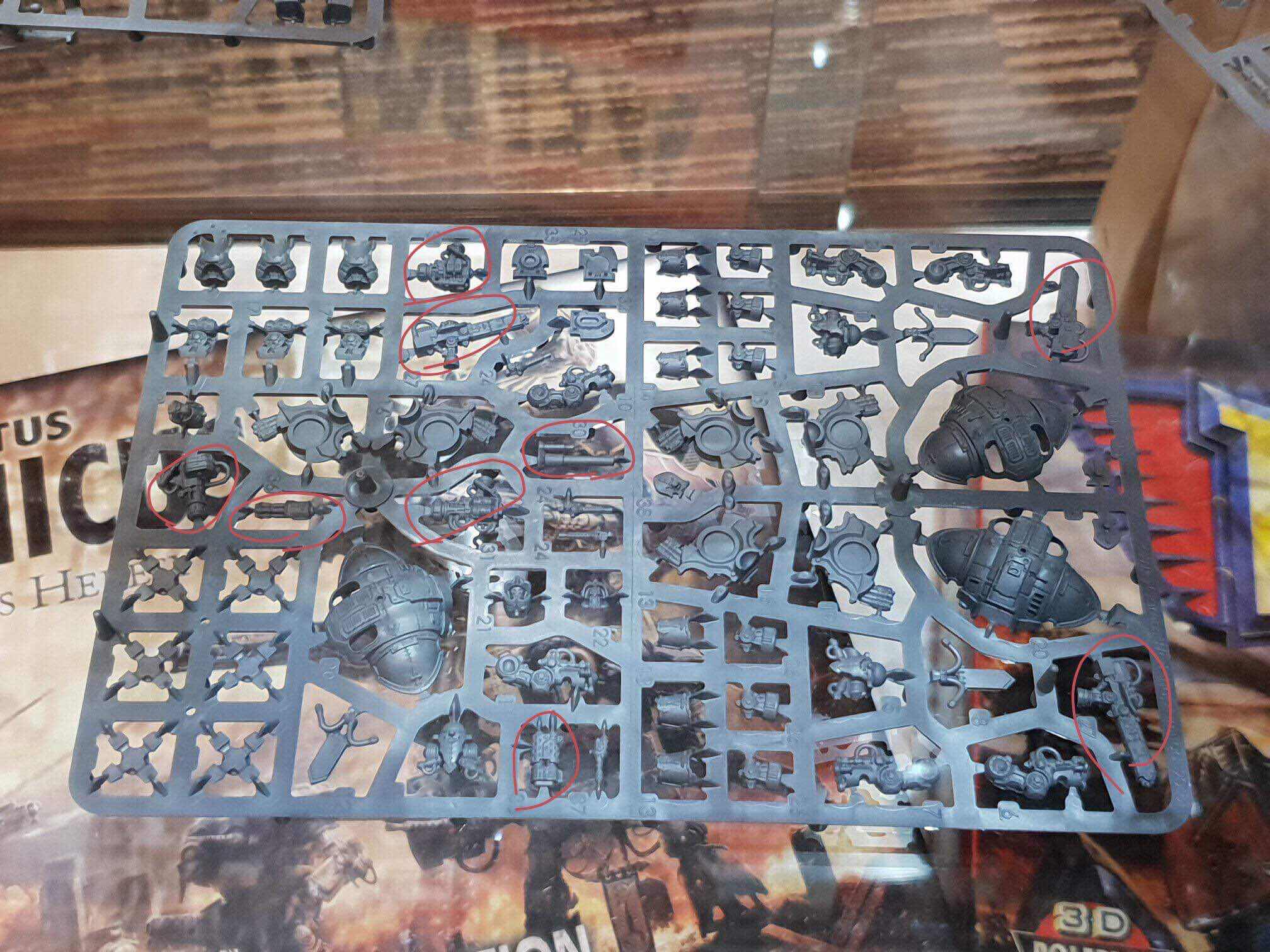 Upgrades. I am a fan of the Mars-Beta head for my Princeps Senioris Warlord for the Bloodmire Battle Maniple. Surely it must come out as an upgrade pack? The issue is the Warlord head would be the same size as the tip of your little finger. That means there needs to be a assortment of other items which can come with the head as an upgrade pack for the warlord, otherwise the blister pack is way too big or just a warlord head. So maybe we will see the Sunfury plasma annihilator, Power Claw and Reaver laser Blasters in a set with a head (hopefully). Maybe the Lucius head would form part of another upgrade pack in the future for a pair of Gatling Blasters, Quake Cannon and Las Cutter for example. 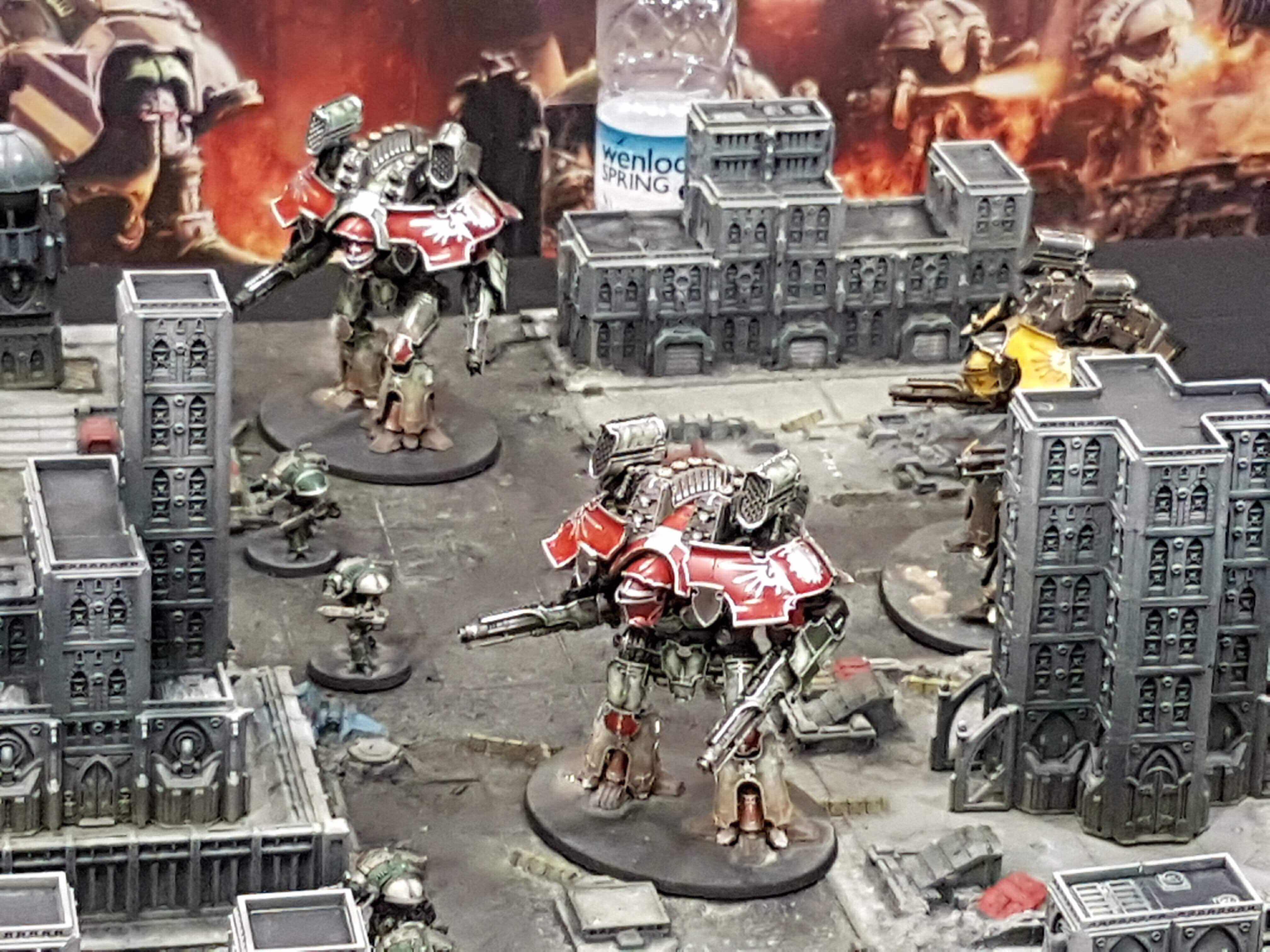 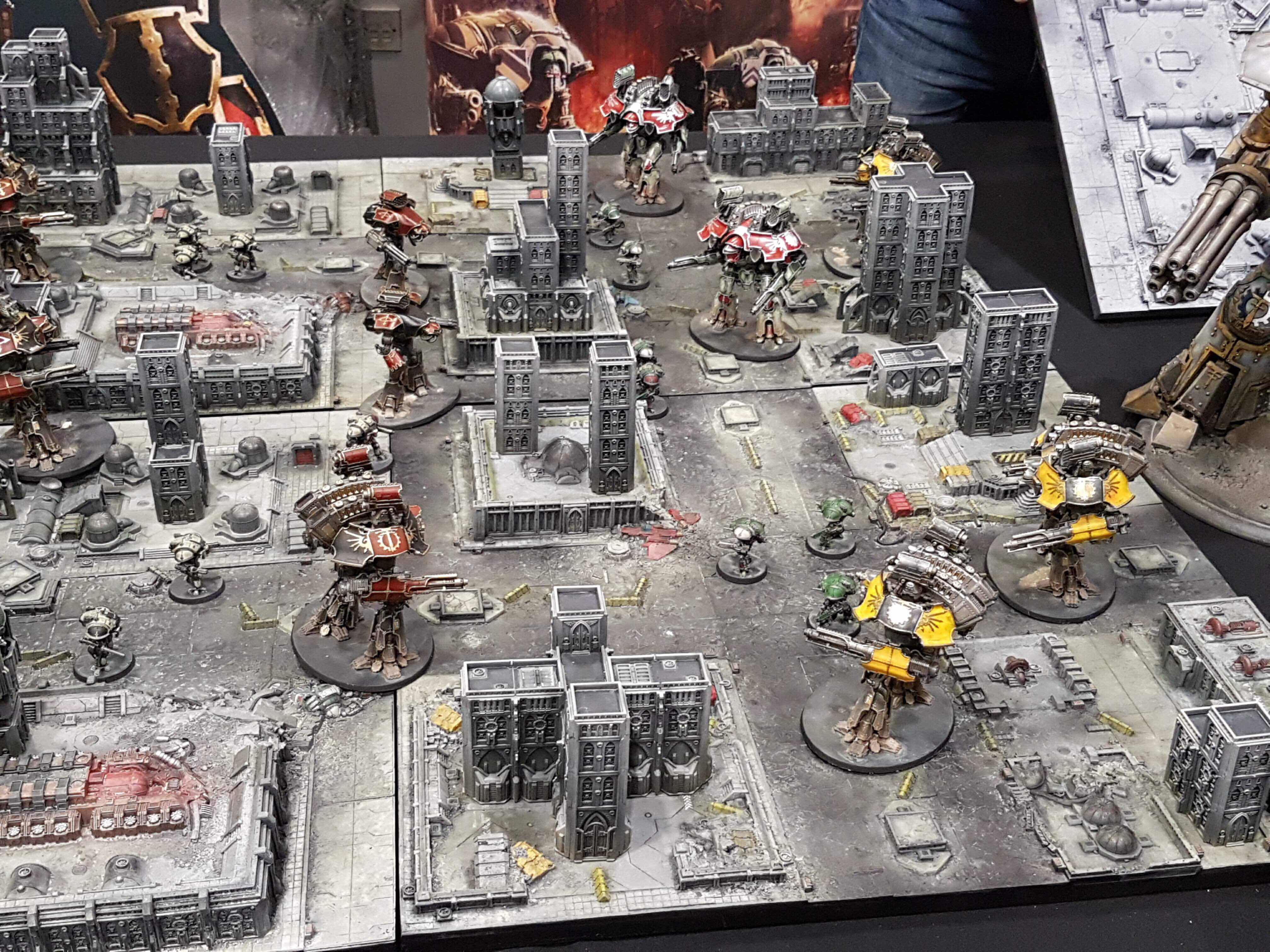 What I would love to see.
Well there’s lots, but primarily I really want to see a Titan Hanger for display purposes like the one below. Would be great if we could have something like this (half foot wide and a foot long and extendable). This would be great for book cases/shelves etc and would show the Titans at ease between Warzones in the belly of a Mass Conveyor. 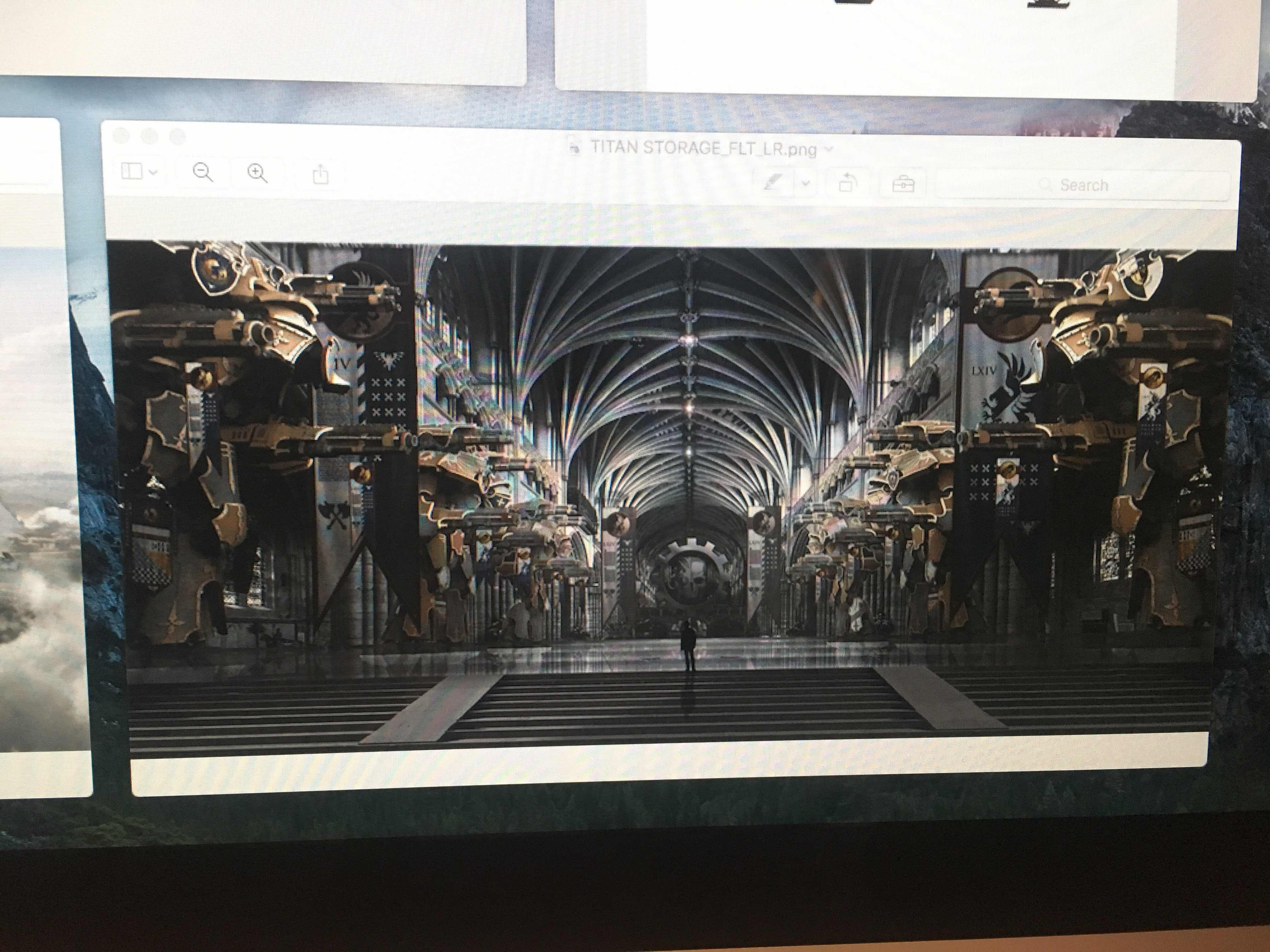 (Smaller) Mass Conveyor tile. I would love to see a feature tile akin to the Thunderhawk tile, with a landed Mass Conveyor ready to disgorge the Battle Maniple. 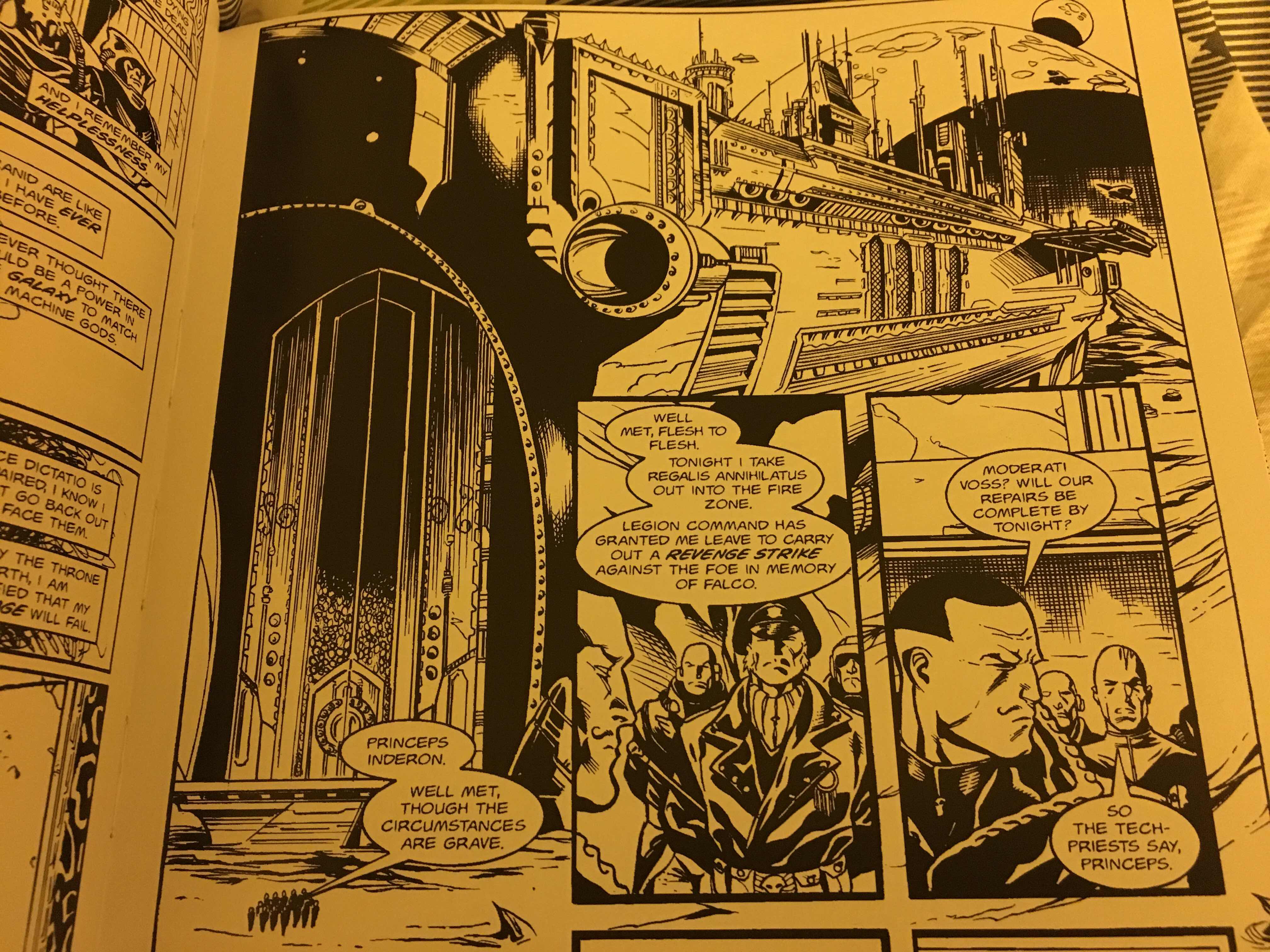 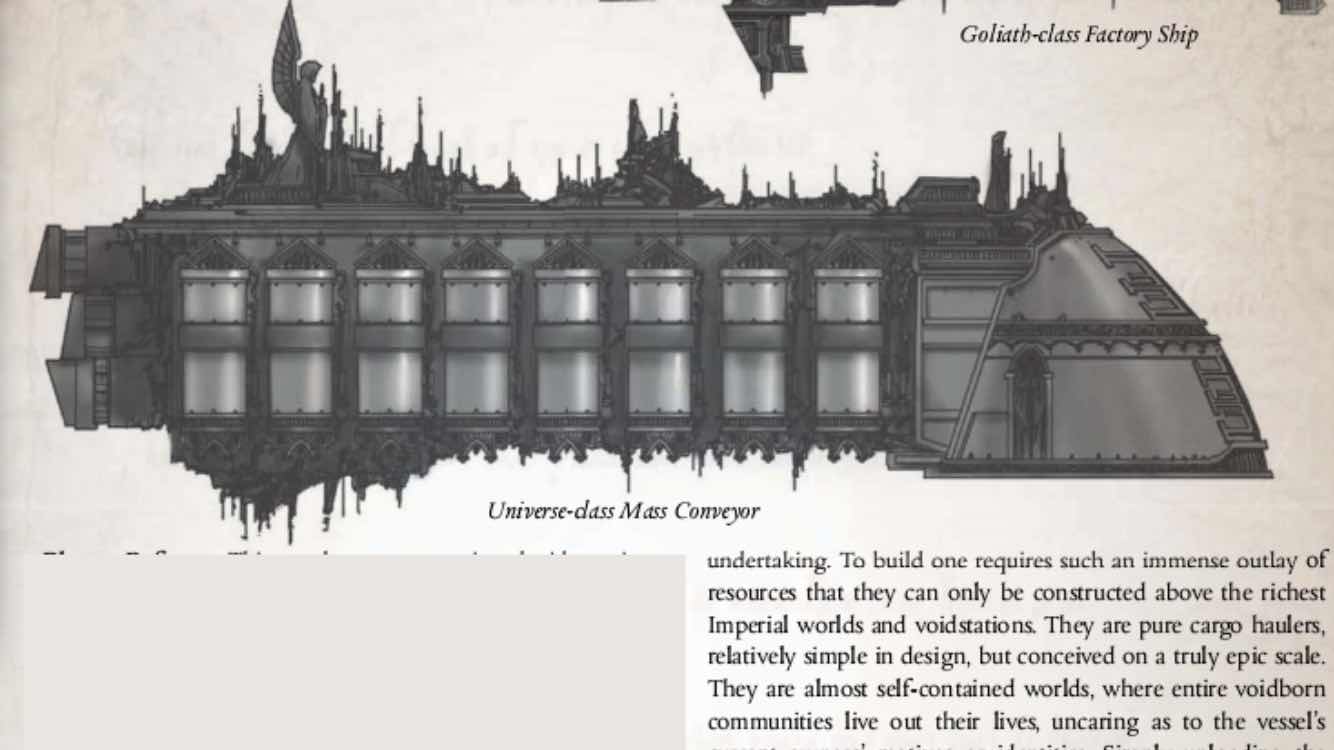 Siege Wall. A modular Siege wall (with destroyed sections which can be swapped in mid game) which the Titans can fight through. As Titans are instrumental in many sieges, it would be a cool piece. 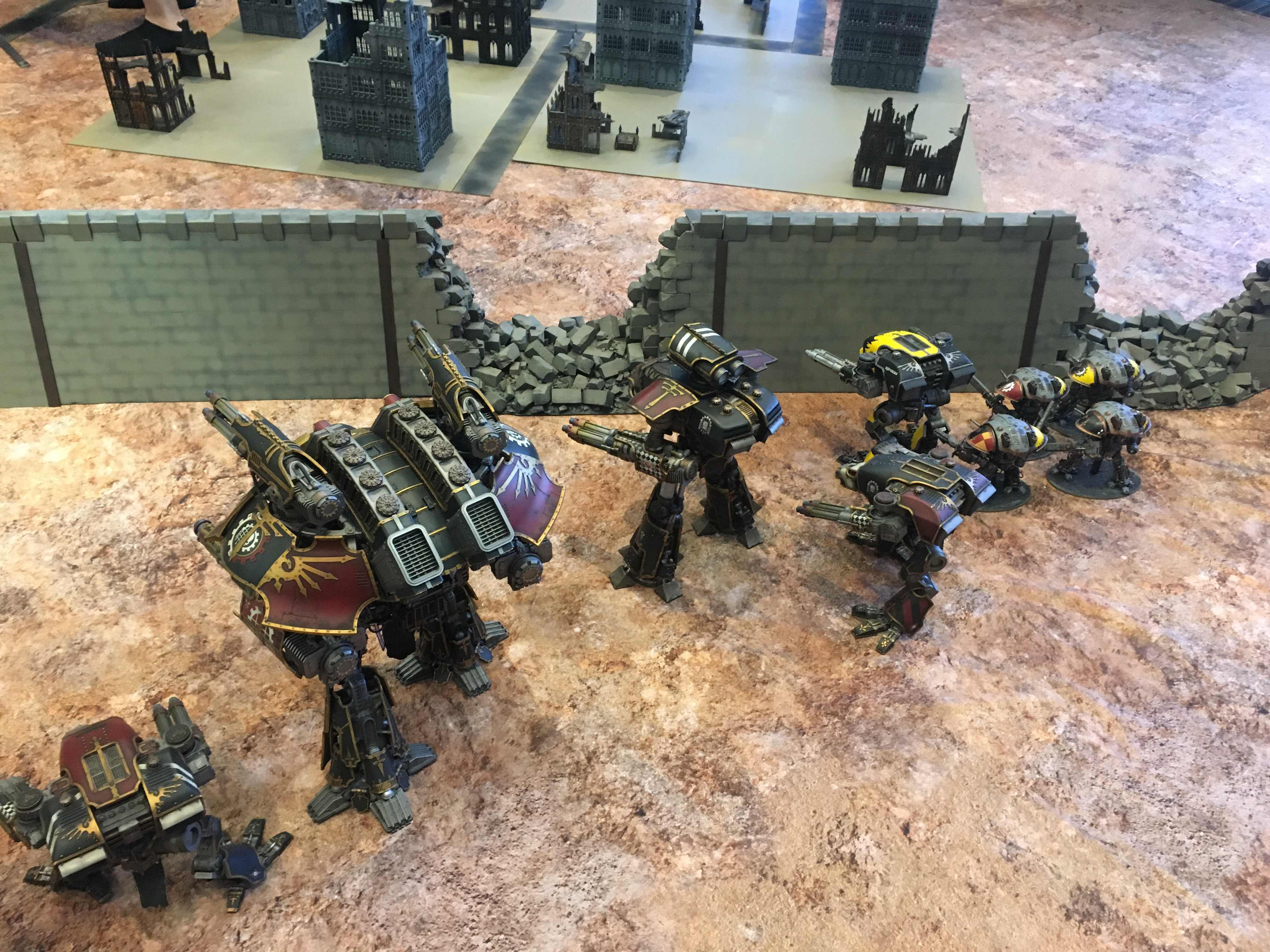 App support. Blood Bowl had it, and this game is screaming out for it. But the thing I want the most is the ability to sound a Warhorn as I activate the Titan right on the screen (different pitch and sound depending on class).
Transfers! Heresy started in 2013 and we are still waiting for all Legions to have their transfers released. Now I can imagine the opening ten Legios will get Transfers sharpish, but other Legios like Praesagius, Fire Wasps, Tempestus, Astraman, Magna should get theirs sooner rather than later too in my opinion. A lot of people may be sitting on the fence waiting to start their Legios, so it would be ideal if they came out sooner.
Another thing! Look at this sheet, somethings missing. 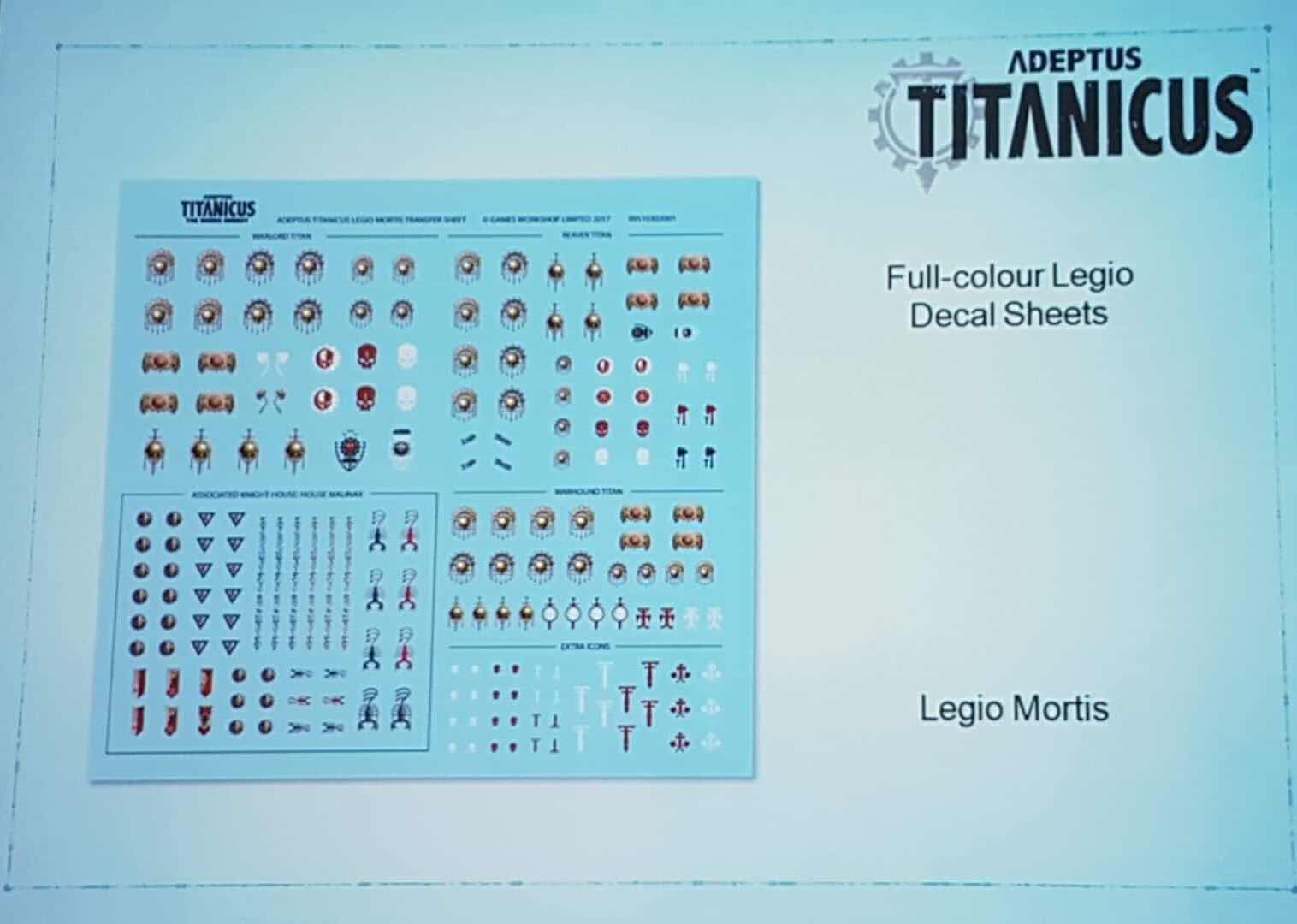 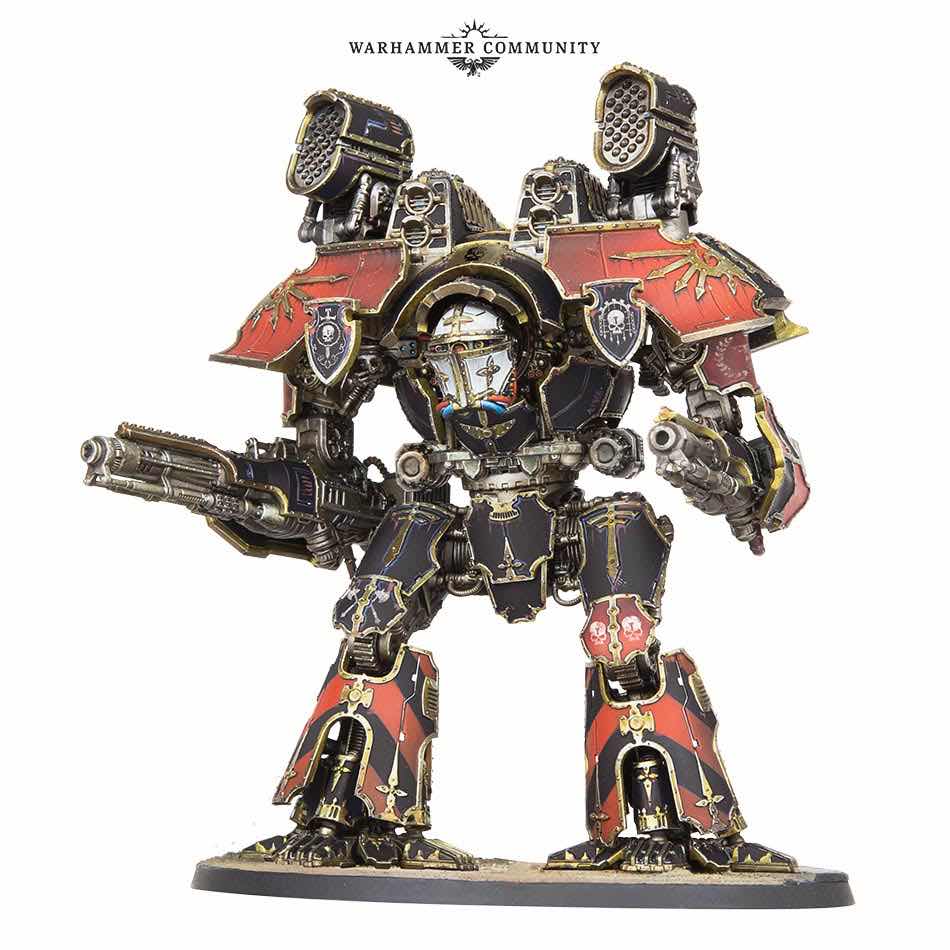 This guy is rocking the white. So maybe the set in the box is akin to the Battle for Prospero Vlka Fenryka sheet, and maybe a bigger sheet is coming. That would be cool :D. I would love to see Warlord gun shield transfers on them too.
I wonder what the art releases will be like too? Could they just be prints of these? The Necromunda and Horus Heresy ones were very different from one another, hopefully the AT ones introduce another look too. 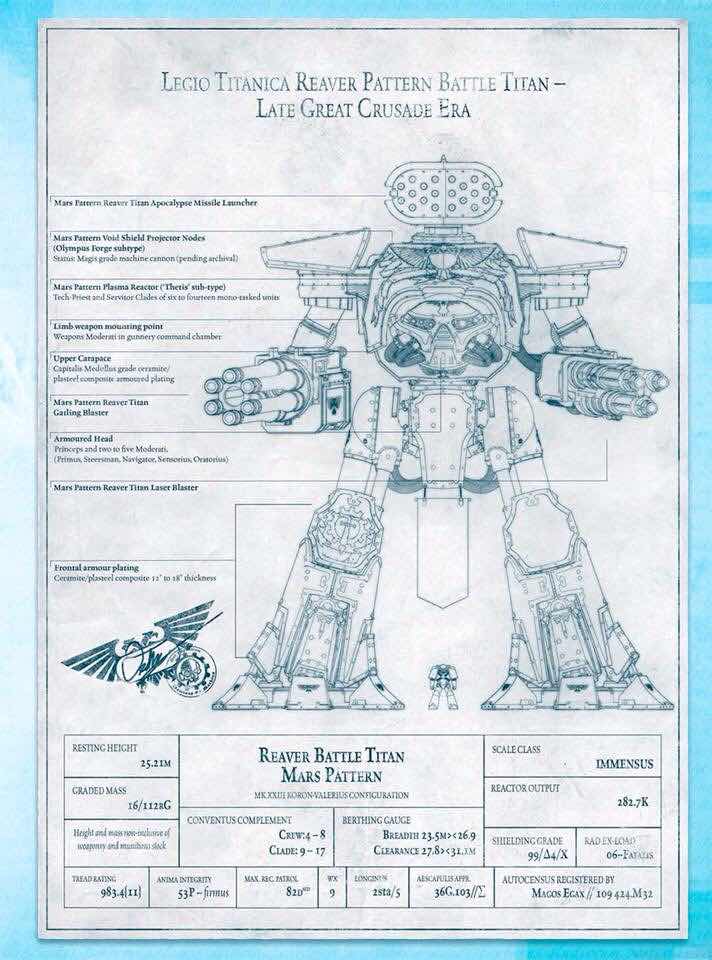 Also looking at the Axiom line up above it looks as though it doesn't say "two Reaver Titans" or "two Warhound Titans" which leads me to believe the other words you can't make out, must say something like XXIII or Koron-Valerius configuration, so maybe to field a Myrmidom Battleline or an Axiom Battleline, it needs to match the loadouts shown (Warlord on box cover appears to be the same as the one in the loudout pic) soooooo MAYBE there will be a Axiom upgrade blister pack in Resin with Sunfury, Mars-Lucius and Power Claw as well as a Reaver Melta-cannon?
The Myrmidom blister pack might be similar if that is the case, as it is a 3x Warlord Battleline, maybe it will have a Mars Lucius Head, Mars-Beta, 2 Laser Blasters, power claw, Sunfury too??
(Update: It looks like the left Column says Mandatory and left column says optional) soooo maybe not).
Well I hope this hasn’t bored you.
TOC