Owner: Michael H.
Location: United Kingdom
Comments: I went for Legio Ferrax as their moniker, 'Iron Wolves', was incredibly fitting for myself, given that my two Heresy legions are Space Wolves and Iron Warriors. Research shows there's not a lot of information about the Titan Legion either other than some involvement in engagements against the Orks, giving me a lot of leeway for getting creative in my colour schemes and fluff.

Paint-scheme wise, the objective will be to paint them similarly to my Space Wolves legion, with a wolf-grey as the predominant colour. Yellow would have been a sensible secondary colour, but not wanting to confuse my Titan with Legio Gryphonicus, I'll be opting for a dark red like my VI Legion, with yellow/orange and lime green as spot colours.

I wrote a bunch of thoughts on my building and painting process for this model on my blog. You can see these posts here: 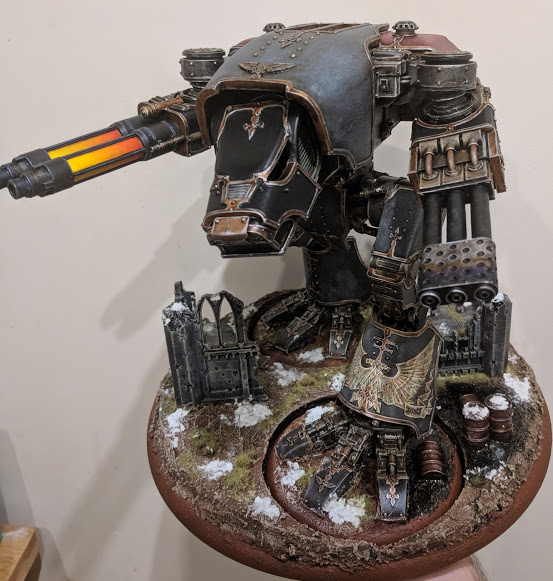 Just wow. I love the mottled grey on the carapace. A stunning Engine, it would be a sin if we do not see more Engines from Michael. 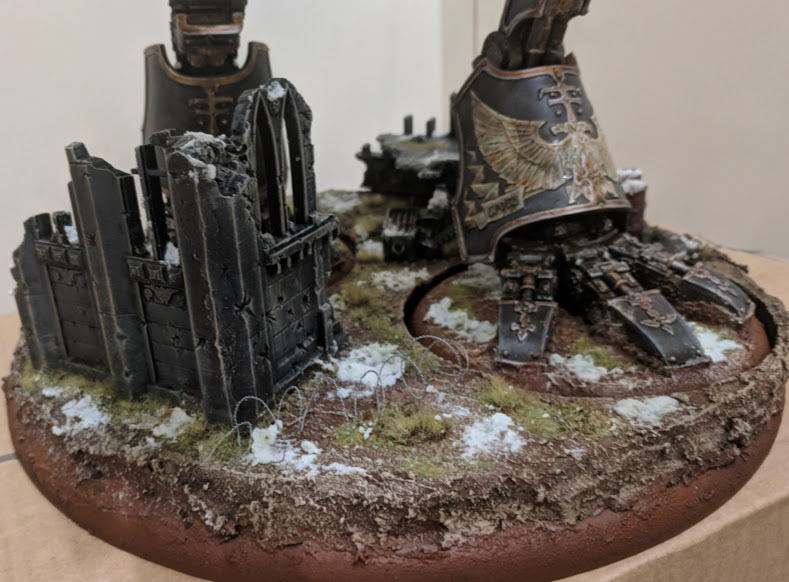 Look at that base!! 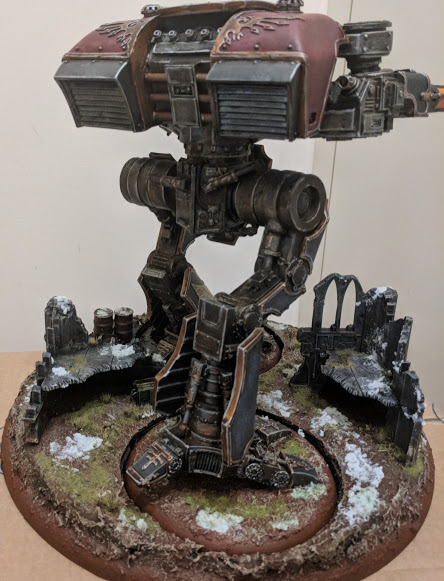 I think the idea of being able to swap between little or no base to a diorama base is a great idea. 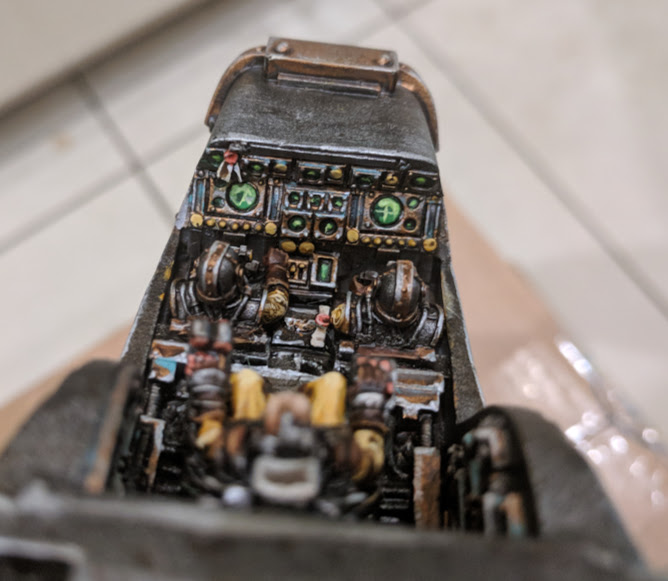 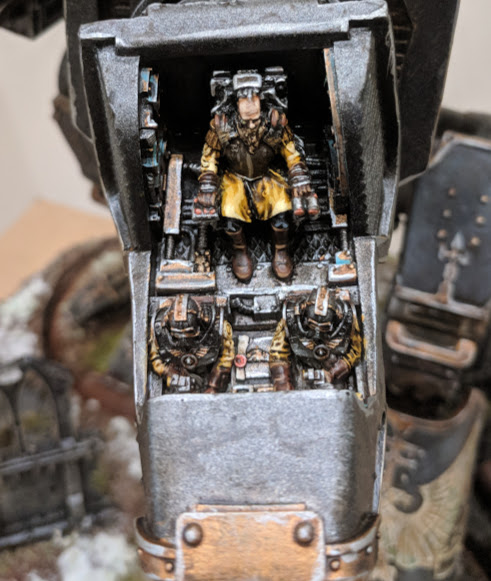 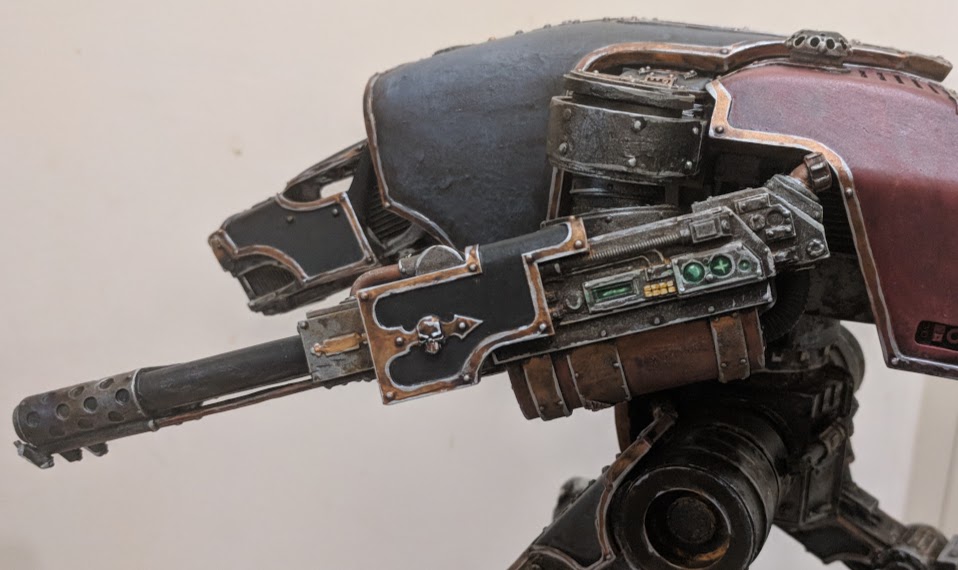 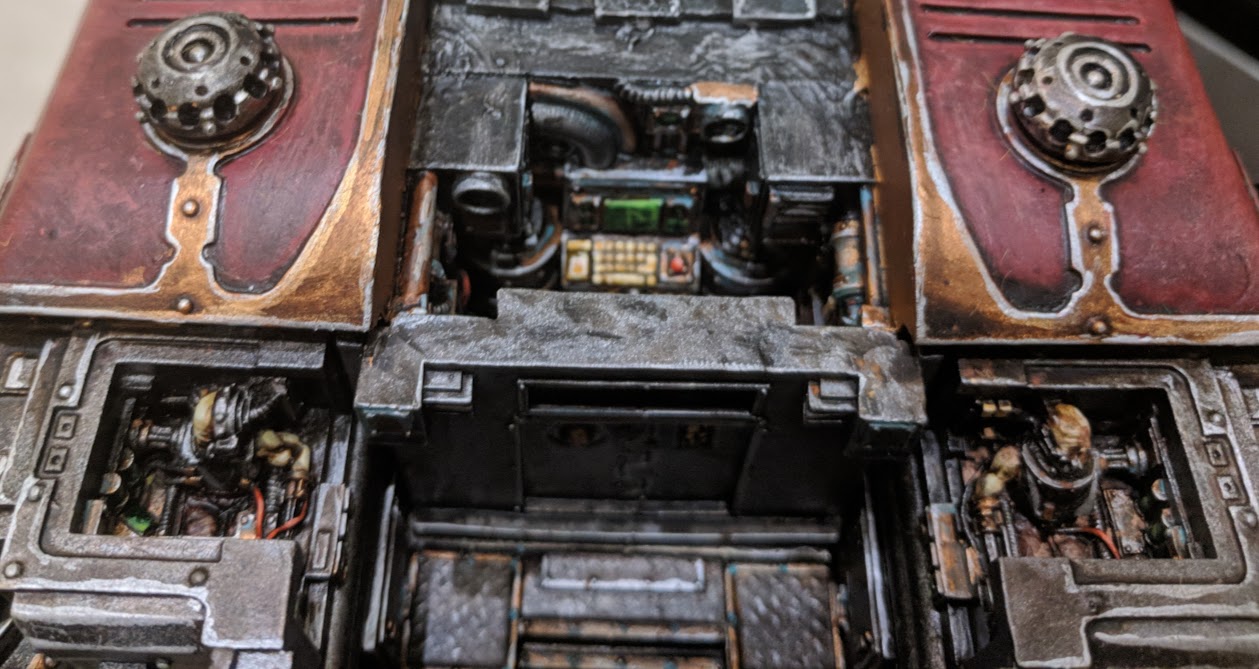 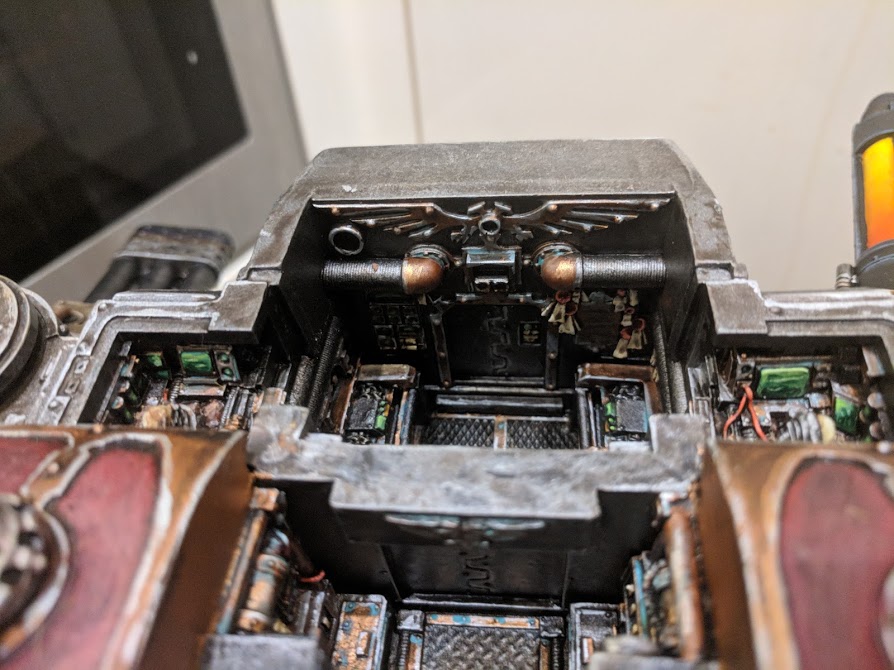 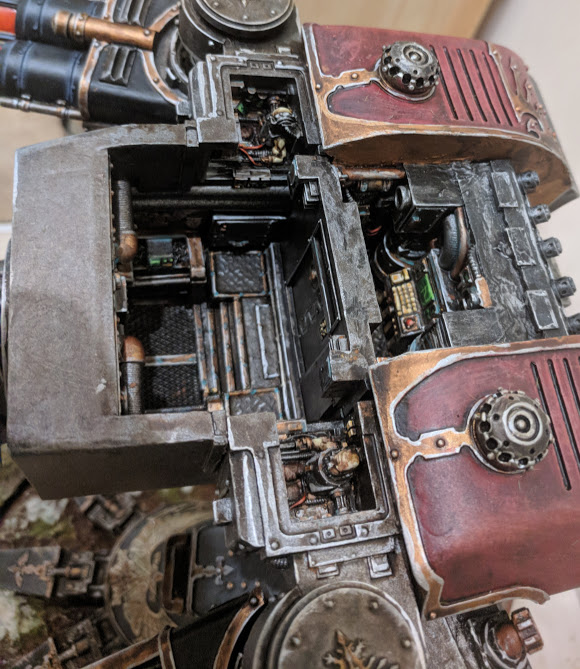 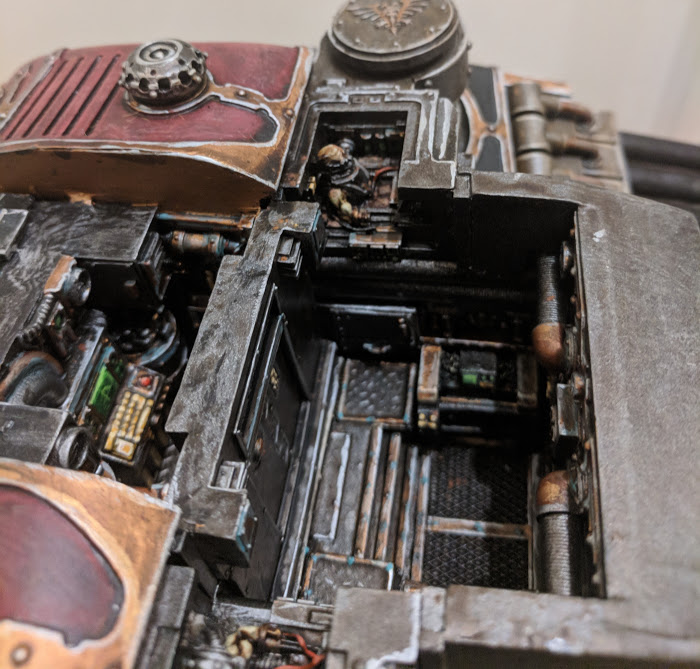 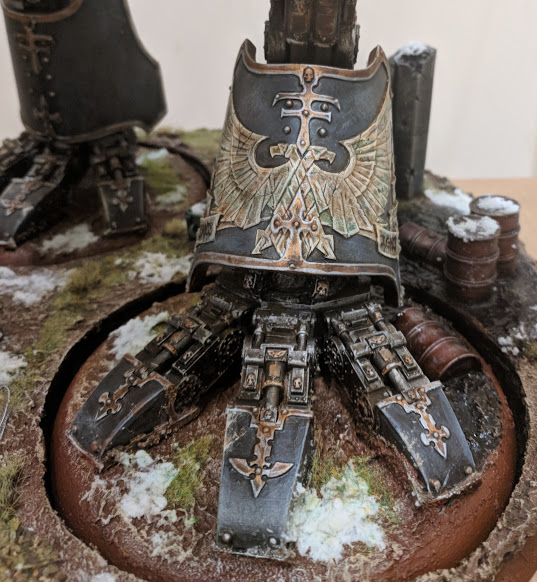 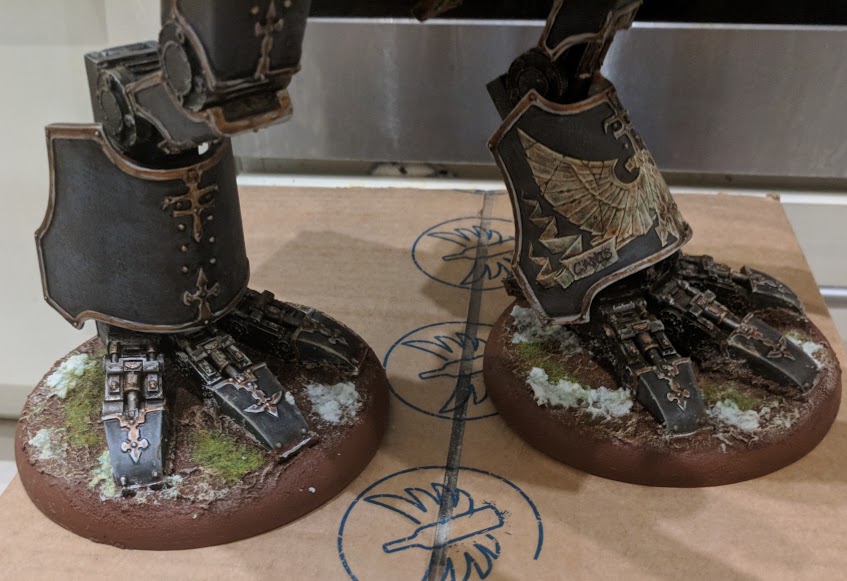 The heat bloom effect is great! 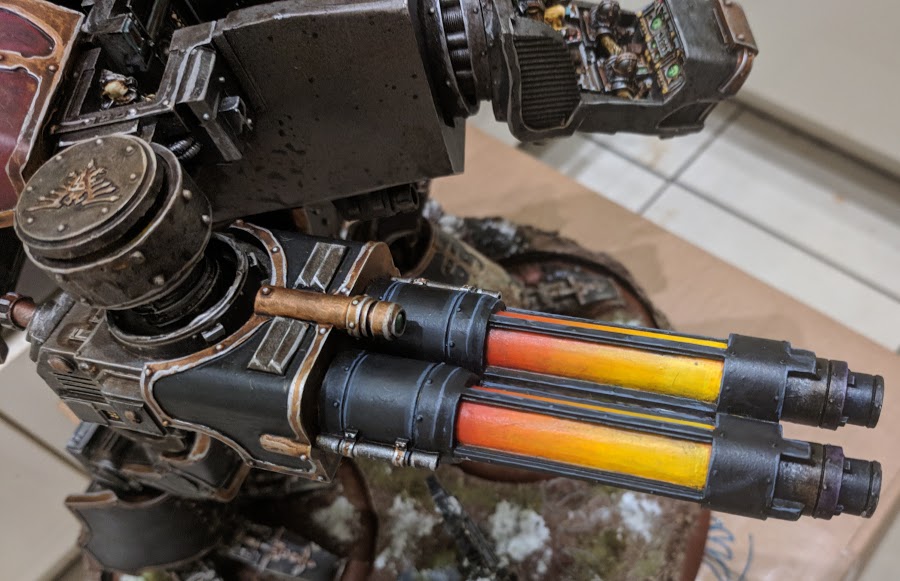 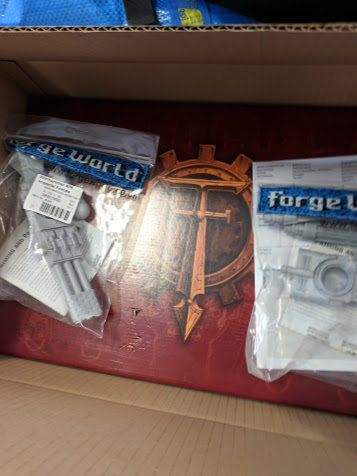 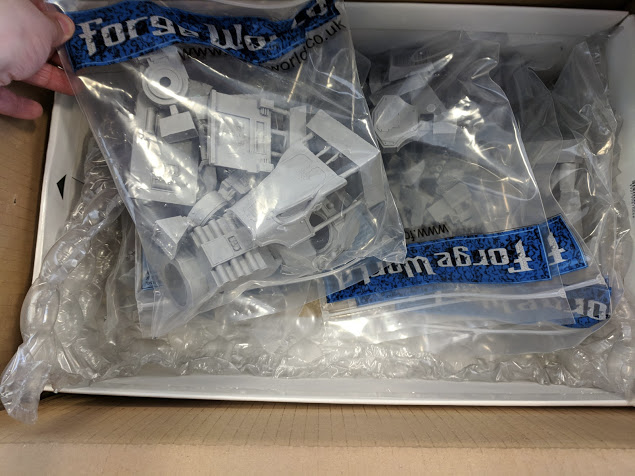 First unboxing.. so many bags! 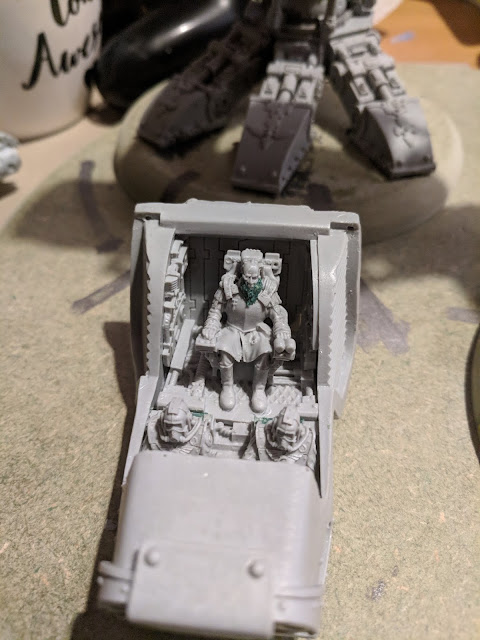 My cockpit. I opted against a completely fresh model for my Princeps, as I really like the design of the one provided.. I did green stuff a somewhat fuller beard though to add a little originality. 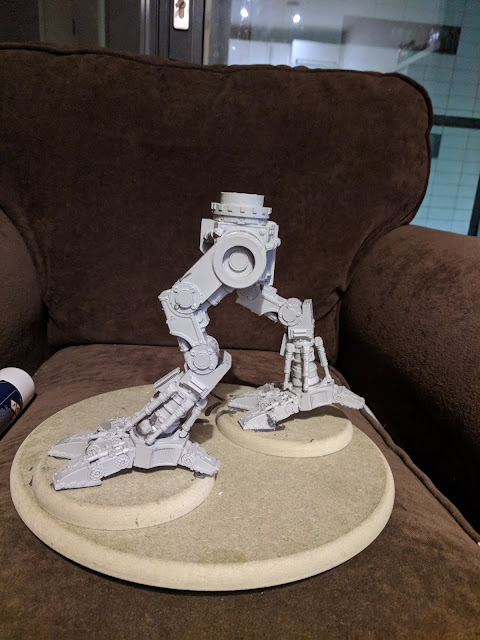 Final pose that I settled on for the legs. I wanted both feet based as the notion of it buckling and breaking gave me way too much fear, but I didn't want a scout titan to my completely static. Thus I opted for the classic one foot forward pose.

The bases are bevelled 12mm thick wood circles that I bought on eBay. I've always loved how fully round based Titans looked, but the impracticalities for gaming seemed way too great, and I wanted to get the most out of my Titan. Thus I went for two smaller 5" snow shoes, with a full 12" round base beneath. The plan here is to place 2 layers of corkboard over the bigger base to create a flush inlay for the snowshoes to sit on the larger scenic base - one at 9mm wide and another at 3mm, in order to have additional, smaller inlays to put some smaller miniatures like Marines and Dreadnoughts to really show off the sense of scale on this beast. More photos of that when it's done
! 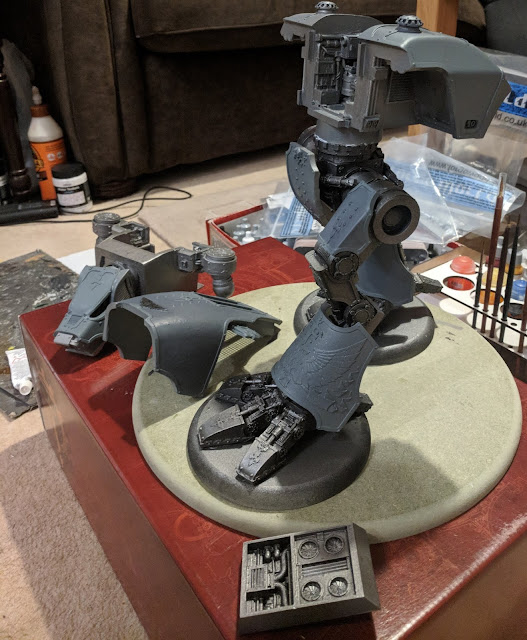 Rear-torso JB-welded and glued down, armour platings primed and base-sprayed and most individual big parts assembled. I'm not the most patient man, and I hate doing too much work in sub-assemblies - I don't have a proper place to work in my flat other than the living room, so any works in progress tend to take up sit around taking up space. The sooner things get assembled, the less mess and ire drawn from my fiancé. With this sub-assembly, the plan was to get everything properly base coated and washed to ensure proper coverage and that the darkest recesses were properly black and dark - I don't mind dealing with awkward angles in the highlighting phase so much. 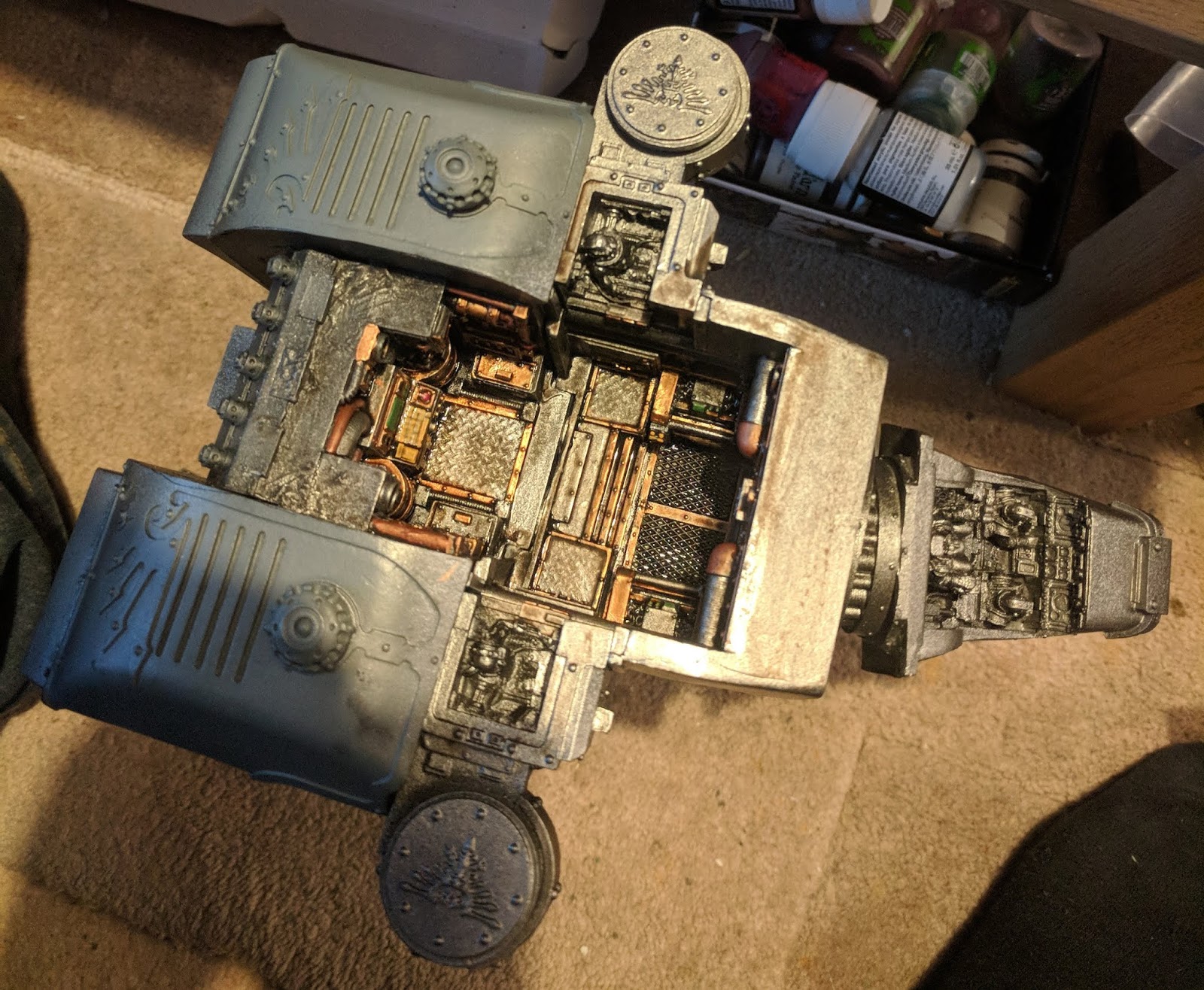 Quick and sloppy, but fully coated, sans a couple of areas I'd like to touch up to improve wash coverage. It doesn't look great yet, but it doesn't need to yet. The one part I haven't assembled yet is the door/wall between the rear and mid compartments - that, I discovered - slides in without too much effort (but not back out!) even after assembly, so keeping that separate I can still get in there with a brush and throw it in at the end. 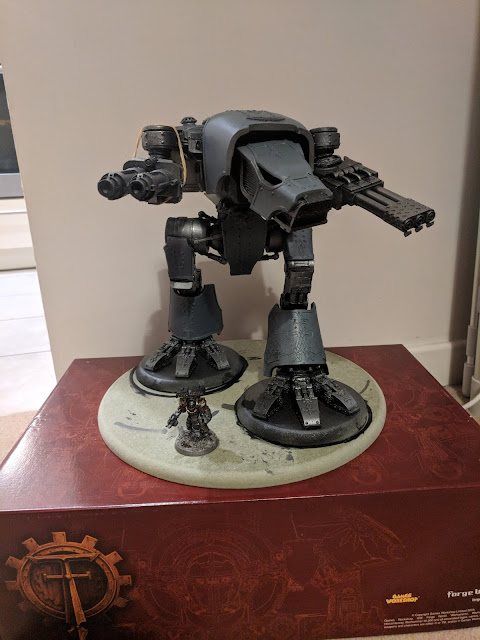 Everything put together with an (also WIP) Iron Warrior Tyrant Siege Terminator for scale. A rubber band is still holding the Turbo-laser together at this point. The interior detail beneath the metal vents on the top have been fully painted and glued in place at this point also.

I primed and boiled the cabling for attaching to the Titans weapons, but eventually decided against using them as there just wasn't enough space behind the weapons for them to fit!

With that, the final construction step is finished and all that's left is to base and paint the model. A daunting task, but one I'm very much looking forward to!