Owner: Gary C.Location: Cornwall, UKComments: The ‘Mortem Paradisi’ was one of the five original engines that made up the Retlaxi Primogenitus maniple. Under the command of the legendary Martian Princeps Seniorus Alyona Verkhola. Verkhola also known as the 'Ferrum Virgines' or 'The Iron Maiden' commands the 'Omnissiah Soter' an ancient an terrifying Warmonger Emperor class titan. The 'Omnissiah Soter' was one of the first engines to be garrisoned at the Legio Mortis's secondary forge-fortress on Retlaxi an has had the honour of commanding its first commissioned Argonaut Maniple from that day on. The Retlaxi Primogenitus maniple along with the majority of the other Legio Mortis engines during the great crusade joined the 63rd expeditionary fleet under the command of the Warmaster Horus himself. The maniple fought many battles along side the Sons of Horus and Iron Warriors legiones astartes throughout the heresy and now is currently deploy on the planet of Beta-Garmon IV. The Mortem Paradisi gained a fearsome reputation during the great crusade. A true engine killer, even before the days when Legio fought Legio the Mortem Paradisi excelled in engine combat. With two confirm Aeldari titan kills during the ‘Halo Gulf Cleansing’ and eleven Ork titan grade engine kills earning it a formidable and intimidating fame during the Ullanor campaign. During this time due to the staggering carnage the Mortem Paradisi reaped, the crew named the Marco Gatling Cannon 'Death Rattle' because of the noise an devastation it created on the hoards of Orks an their ramshackle God machines. The reputation of Mortis princeps being stubborn and insular doesn't stop with Princeps Corisini in fact as far as stubborn and insular Mortis princeps go he is one of the worst. His arrogance an displeasure of working with other Legio's is well documented. His actions during the Accatran Compliance with Legio Venator played a pivotal role in the near Legio civil war there. Like most of the Legio he wears a personalised skull faced helm into battle. The tradition dating back to the birth of the ‘Triad Ferrum Morgulus’. His helm resembles a growling skeletal face of a long extinct animal reminiscent of an ancient Terra’s vampire bats skull. Photos: 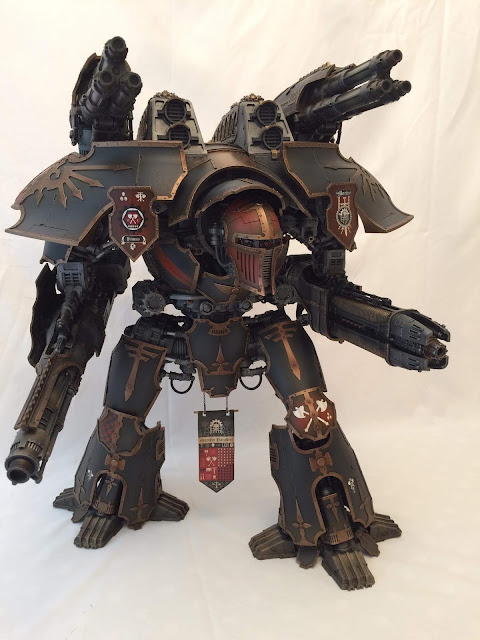 An absolute piece of pure beauty. 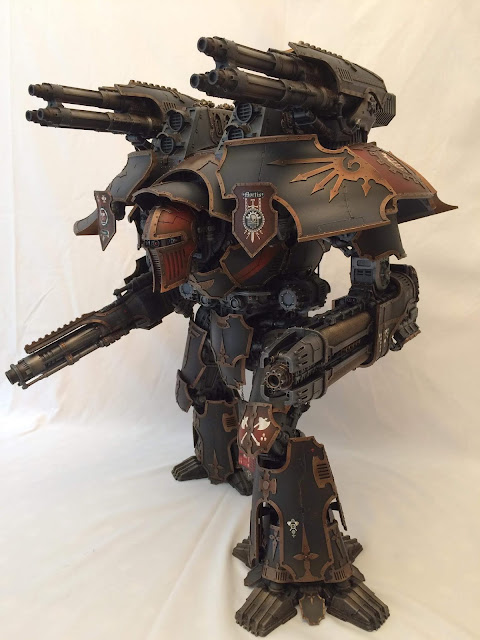 Gary took a lot of time in preparing his Warlord Titan and it shows. 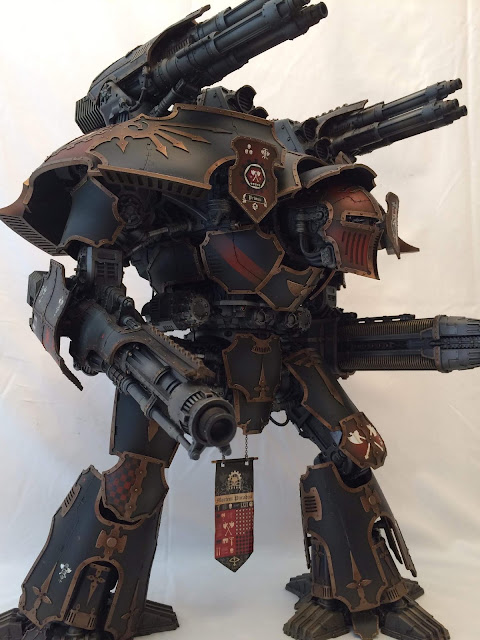 That is a front cover of a comic stride right there. Positioned perfectly for maximum presence. 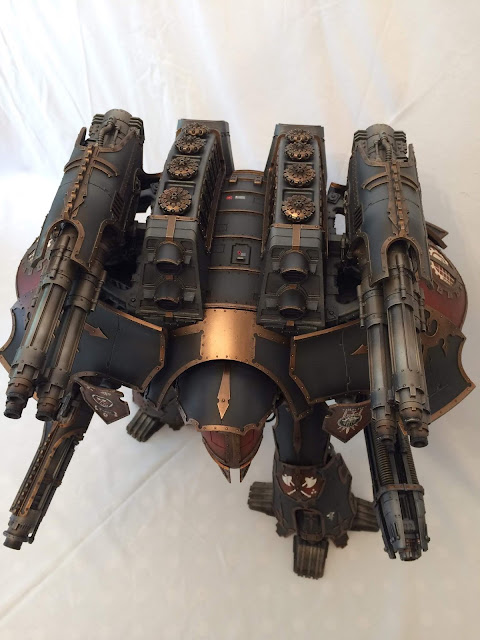 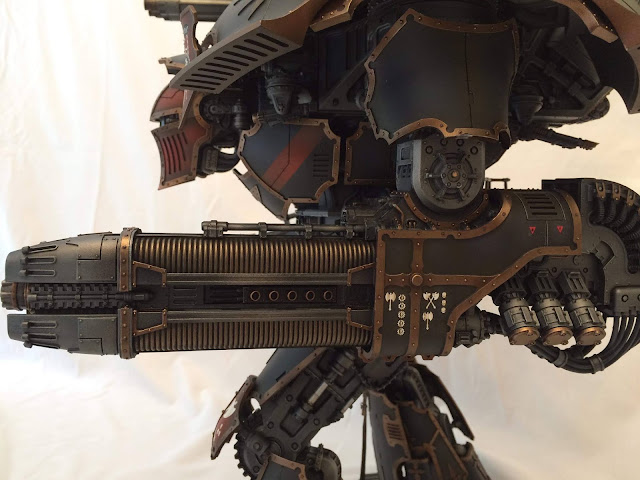 I do love copper ribbing on plasma weaponary. 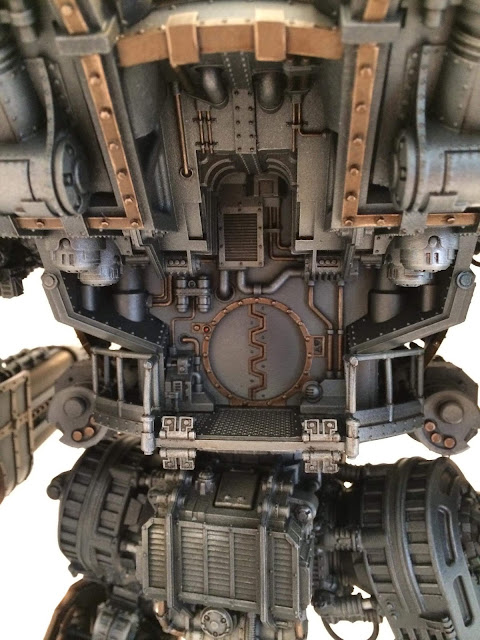 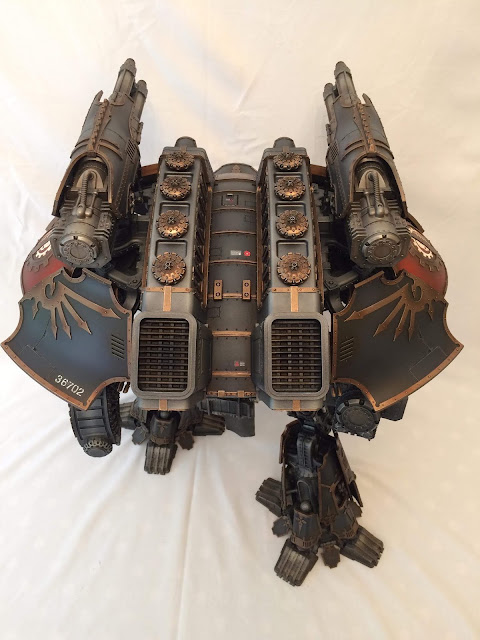 Gary uses Airbrushes as a primary tool in his work, and it can be seen evidently here. Great shading. 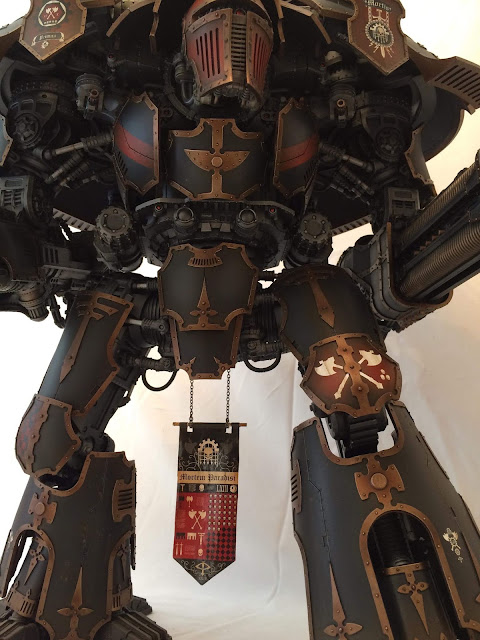 That's right mortals, Horus sent a Warlord and he doesn't even consider you a threat as he steps casually by. 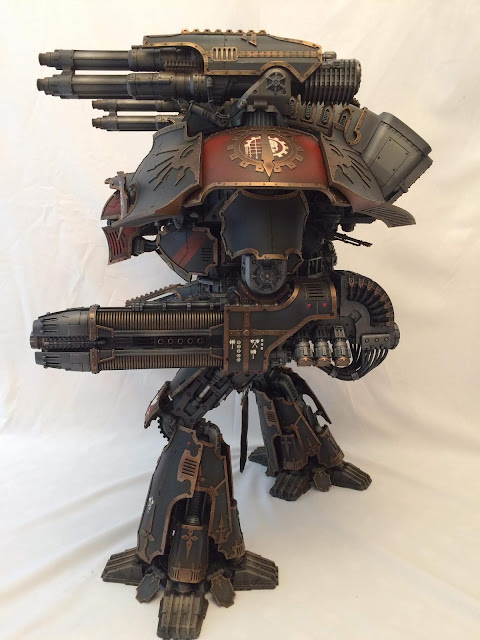 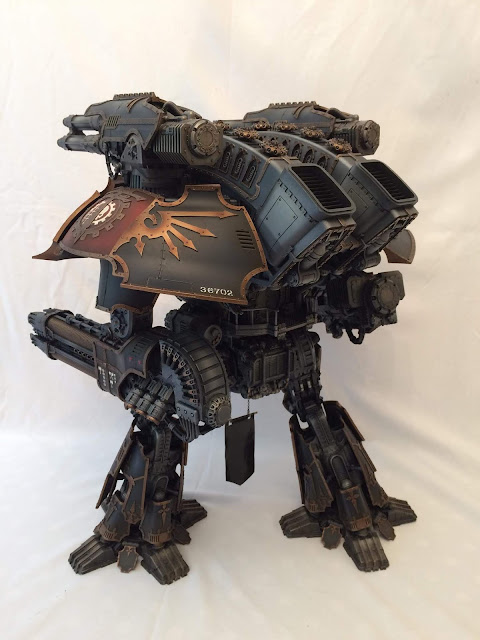 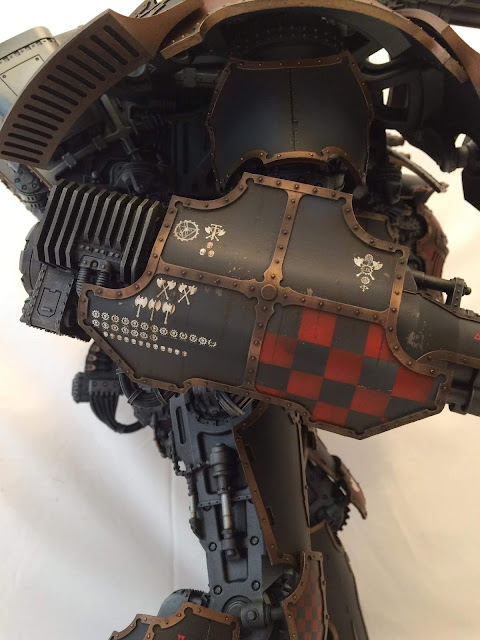 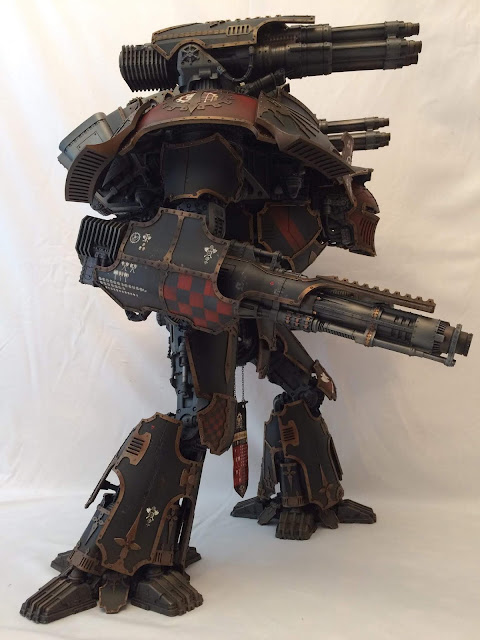 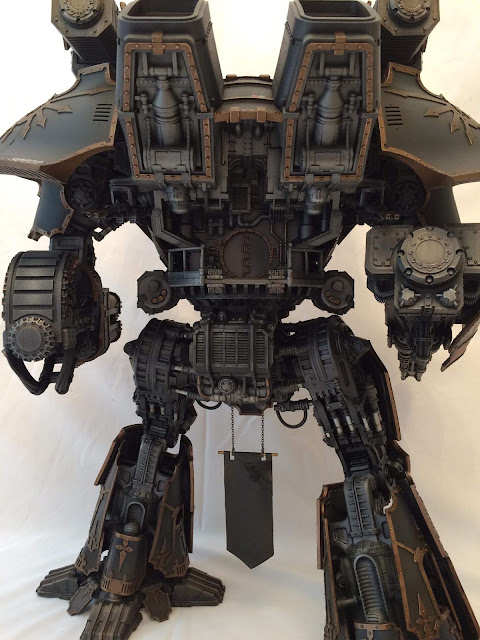 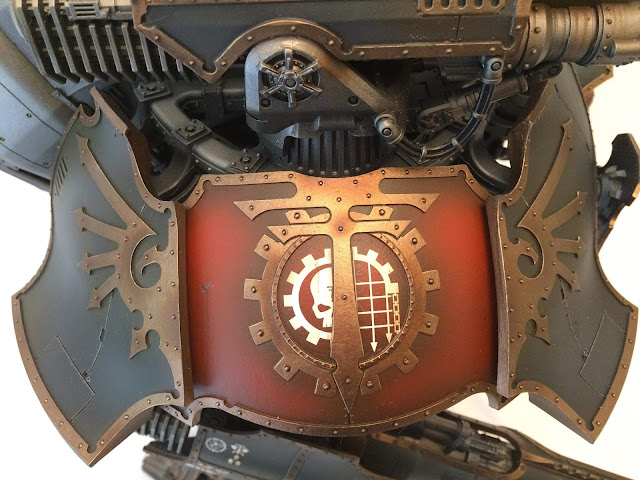 Gary even uses an airbrush to do his brass trims. a lot of masking indeed!! 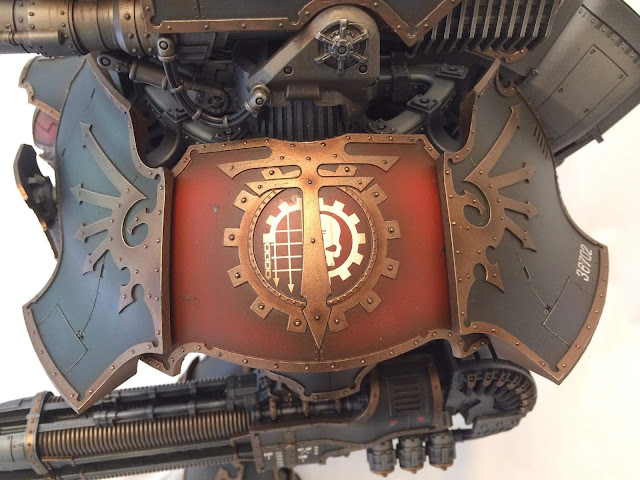 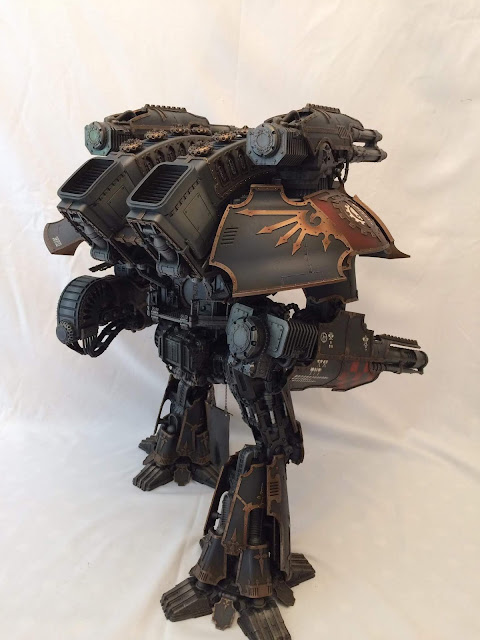 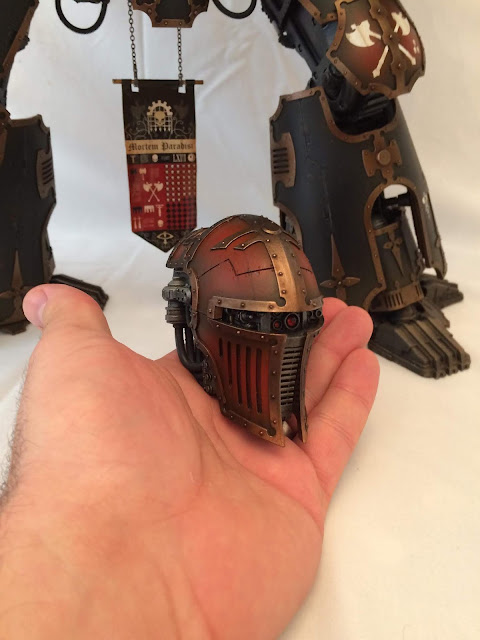 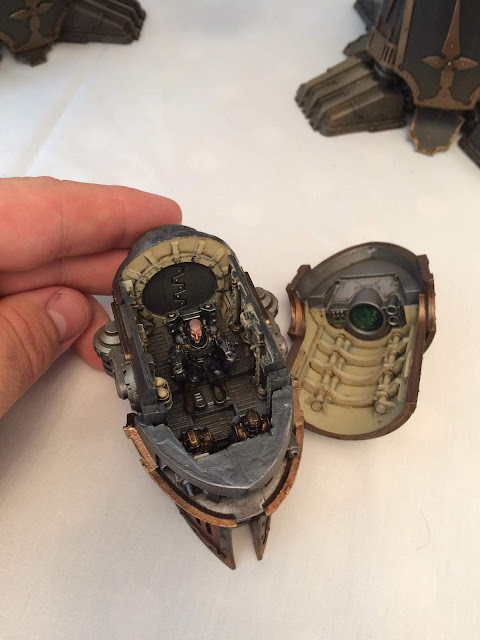 Here's the proud Princeps Janek. He knows he looks good in his Engine! 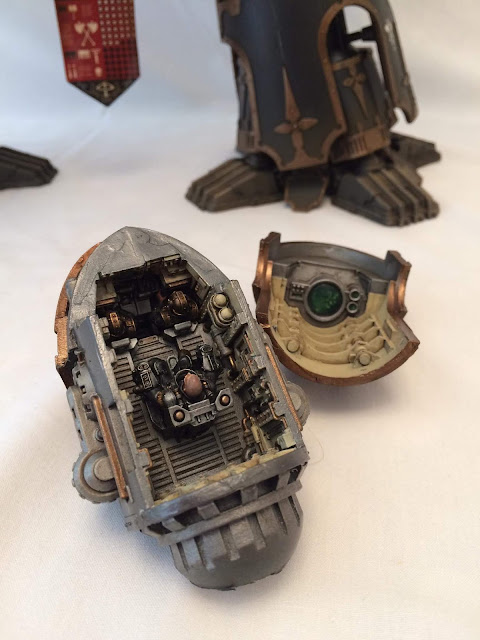 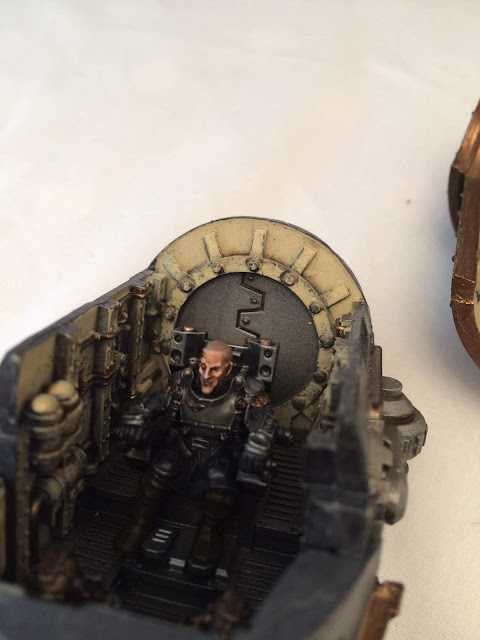 Gary is a great friend of mine now, and we talk regularly about everything Mortis. He runs the Legio Mortis Facebook page if you want a daily fix of everything Legio Mortis!