The July White Dwarf brought us some serious goodies for the Adeptus Titanicus setting.  White Dwarf has been delivering on missions, lore, and more and this time we get the opportunity to build our own Titan Legions!  Fancied stealing some of the wargear or abilities of other Titan Legions (fitting, given the Blood Ravens got an index this month)?  Want to make certain stratagems your key feature but for a good price?  These rules let you do just that. 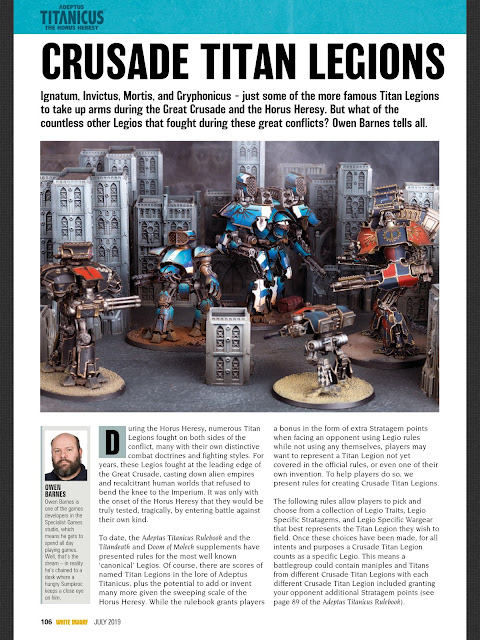 This is going to be a golden opportunity for players who like to do their own homebrew stuff (Shadow plays Astorum in AT, but representing his Legio Kurogane is a different matter in 28mm scale), or for those playing a popular Legio but awaiting rules.  It behaves really easily: you get four picks of your choice from Legio Traits, Stratagems, and Wargear with you only able to pick two maximum from those categories.  White Dwarf actually explains it really well.

Of note is that the stratagem selection is based on existing ones, so there is nothing new here.  Shadow will definitely be using these for the US National event in October to bring his Legio to life.  What about you?  Hit up the comments.