Fortune continues to smile on us as we’ve been granted a preview copy of the Shadow and Iron supplement for Adeptus Titanicus.  We’re very excited to be given the opportunity to continue bringing you information about this evolving and wonderful game. We’ll start with a review of the lore granted in this new book, covering two vindictive campaigns. 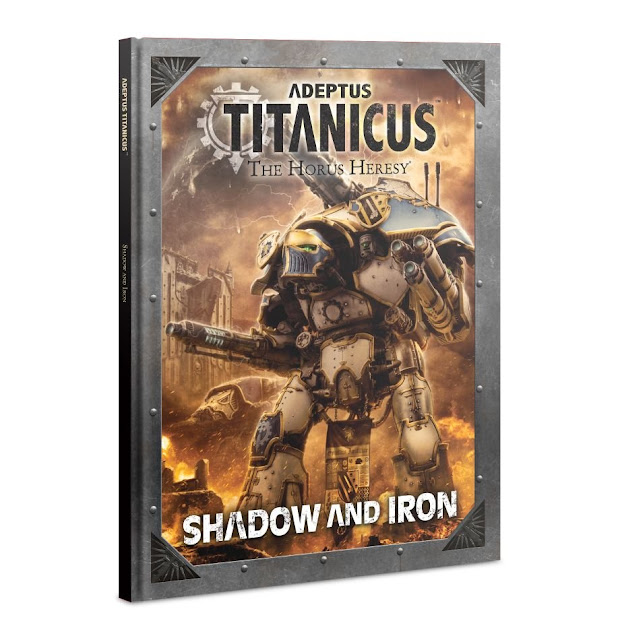 Yet another hardback book like Titandeath and Doom of Molech, which is always a bonus.  And what a gorgeous cover!  This 97-page book provides us with new lore, missions, Titan Legions, and more as well as exceeds the size of Doom of Molech.  It’s hard to deny that this keeps the same flavor that we’ve had in the previous two supplements, but this time we get a bit more than usual.  So, what have we received with Shadow and Iron?


We’ve gotten maps again!  The 500 Worlds of Ultramar, one of the crown jewels in the Imperium’s vast empire, are featured in a map that shows key locations in Roboute Guilliman’s domain.   To go with that, we have nine pages of lore.


Fans of the Honour to the Dead audio drama won’t be surprised by the opening page:  it covers the downing of the Arutan, the actions of the Nine Paragons (not featured in the audio), and Battlegroup Argentus.  It was great to see a piece of Black Library history make its way into the book.  However, the outcome to befall the True Messengers was never in doubt and the results become the impetus for the Crusade of Iron.  The book shows us how the crusade came together and the bloody vengeance that the True Messengers and their allies were hungry for after the betrayal of the Fire Masters and their allies.


It’s interesting to note that the Shadow Crusade and the Crusade of Iron are concurrent events and revolve around many of the same forces.  In many ways the Crusade of Iron is the Legio Praesagius’ vengeance campaign for the devastating blows suffered at Ithraca, with assistance coming from the Legios Oberon and Lysanda.  The Shadow Crusade has been described many times in the previous lore.  It is revealed that the Fire Masters turned to the service of Horus only so that they may know true freedom and be able to conduct war on their terms while others, like the Legio Mordaxis, served the Warmaster through trickery and technological infection.  The arrival of the Ordo Sinister was unheralded and seemingly a moment of unexpected aid, which feels like an interesting, though admittedly shoe-horned, way to get the psi-Titans into the game.


The book also goes on to detail the battles of Ulixis, Espandor, and more.  The bitter hatred between the True Messengers and the Fire Masters effectively resulted in the near-destruction of both Titan Legions.  The lore also covers the destruction wrought upon all of the Titan forces involved and even the development of the Blackshield Households.  It seems neutrality in the war, or at least forging your own destiny, was a common theme during the Horus Heresy and many Knight Households capitalized on it.


The Shadow and Iron supplement has certainly brought us a lot of new lore and tells a brilliantly bloody tale of vengeance and fury.  It touches more lore than we saw in Doom of Molech and ties in very well with other existing publications.  This is a great start to the supplement.

We'll be back with more during the week, including reviews of some of the new forces, the Warbringer Titan, and more.
Posted by Shadow at 05:37:00