Where Shadow and Iron brought the new psi-Titans and some new weapons, Defence of Ryza brings new allegiance abilities to the game and the newer version of Creating a Titan Legion, a revamp of the White Dwarf rules.  For most, the allegiance abilities will be the most important, so we’ll touch on those first.

Hundreds, if not thousands, of Titans fought in the Horus Heresy on both sides of the war, while some forged their own paths.  No Titan Legion was spared betrayal, be it those who stayed loyal to the Emperor while the Legio turned, or Princeps who fell to the honeyed whispers of the Warmaster while their Legio followed the Emperor.  The new allegiance abilities give players the ability to show their true colors beyond just those of a Titan Legion and reflect the nature of the forces they fought for and alongside.  The same can be said of the Knight Households, which also gain their own allegiance abilities, further broken down by Loyalties to additional sub-factions.

Upon building your battlegroup for the game you have the ability to use allegiance abilities if you and your opponent agree.  At this stage, you will declare who your battlegroup fights for, be it Loyalists, Traitors, or Blackshields.  Note that your Legio itself does not influence this since not all Titans in a particular Legio stayed loyal or went renegade.  Of course, each allegiance does have restrictions which will need to be adhered to (eg. Traitor Battlegroups cannot take psi-Titans, but likewise Loyalists cannot take Corrupted Titans). 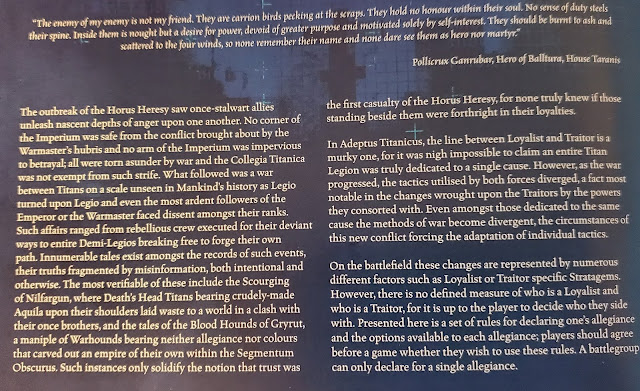 Briefly, the Titan allegiance abilities are:

Knight Households also receive their own allegiance abilities and specific Knightly Qualities, but these are likely to be discussed in another article.  It should be noted that the following allegiances exist:

The beauty of our hobby is the ability to create your own lore and forces.  We build our battlegroups and refight duels of a far future driven by war.  However, we also like to put our own spin on things and the Horus Heresy saw so many Titan Legions snuffed out that history has forgotten their names.  This allows us the opportunity to create our own Titan Legions and Defence of Ryza brings that opportunity back, though somewhat differently from the White Dwarf rules we previously had.

The core of it is simple.  There are four rules you can pick for your Legio, spread among three categories: Legio Traits, Stratagems, and Wargear.  You can only pick two from each category at max but you certainly have a lot of flexibility.  However, it should be noted that there are definitely differences in your options from the White Dwarf article, though the Defence of Ryza selections supercedes the White Dwarf article and have replaced it.  However, this will cause many a player to rejoice in their newfound options, especially if they didn’t have the previous White Dwarf rules.