Word of the Omnissiah reaches to you today Princeps.  See files uploaded to the noosphere from Princeps Dazza.  Learn from his fight.  Learn from the Machine.  Data from Princeps Dazza is sent in a different format to that of usual Mechanicus standard.  This format is considered an alternate and proper STC.  Begin personal inload.

"I recently played a 7,500 point game against my friend Mike from Objective Secured (http://objectivesecured.com.au/) and his Ulthwe Eldar. Mike has a very large Eldar and Dark Eldar army with 20k+ painted points of Ulthwe, Saim Hann, Harlequins, and Dark Eldar. Since we don't regularly play large games we decided to go with 7,500 points to keep it manageable and to see how the Titans got on. This was the first game for my Reaver and Mike's Phantom hadn't been on the table for a long time."

*****
Deployment Deployment was mixed and matched whether  to use Apocalypse rules or not. Standard deployment with three objectives was used the Imperial Guard (Dazza) got first turn. The vast majority of each side's infantry started in transports and both Titans started on the table. Five flyers were in reserve alongside 10 armoured Sentinels and 2 Hellhounds. The Eldar (Mike) had two flyers, war walkers an Avatar and a couple of units of aspect warriors in reserve. The white strips of paper signify mine fields. 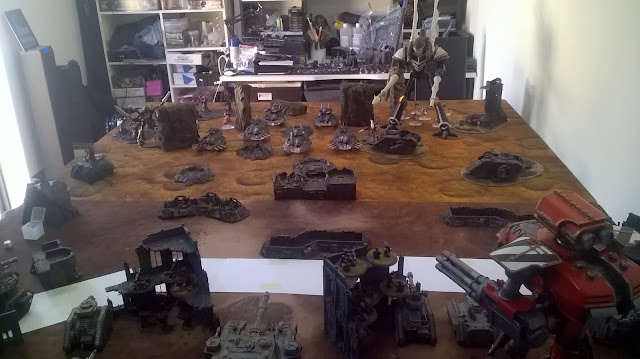 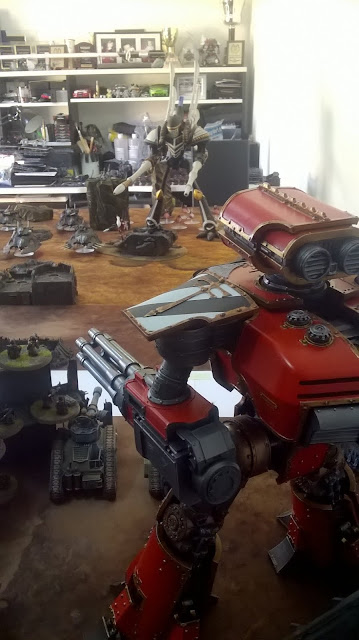 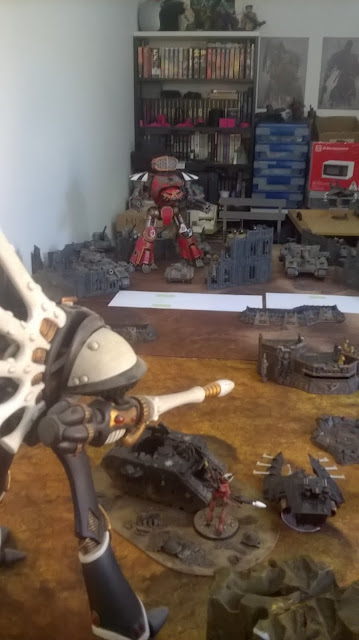 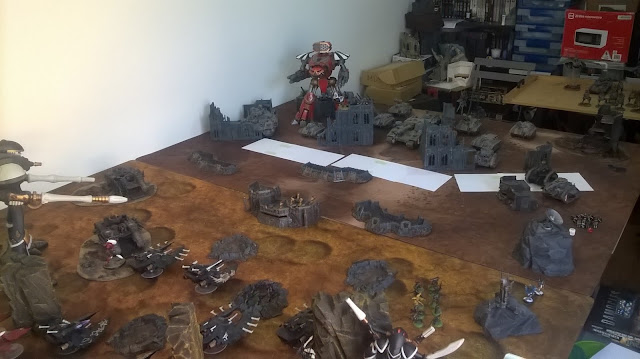 Turn 1 All of the Imperial Guard flyers came on to the board and very little else moved. The entire army targeted the greatest threat on the board, the Phantom Titan. The Shadowsword dealt severe damage to the Phantom Titan and supporting fire from the Reaver, artillery, and heavy weapon teams stripped the Phantom of about half of its hull points.  The Eldar brought on two flyers and some outflanking war walkers to target the Imperial Guard artillery. They managed to destroy all of the Guard flyers (two Vendettas, a Lightning and a Thunderbolt) except for the Marauder Destroyer and the Phantom destroyed a Helhammer with one shot! Not too much more damage was inflicted as the army was advancing. 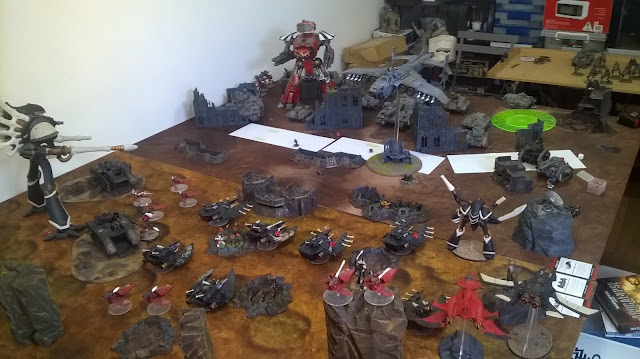 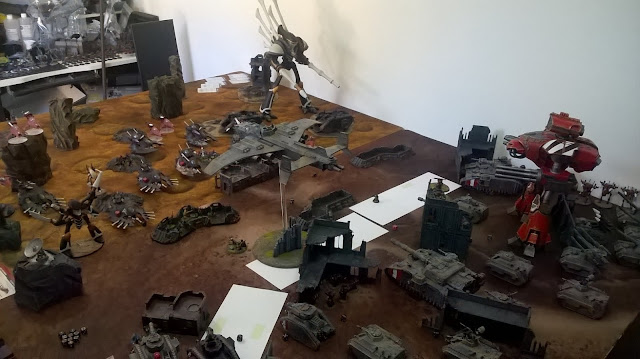 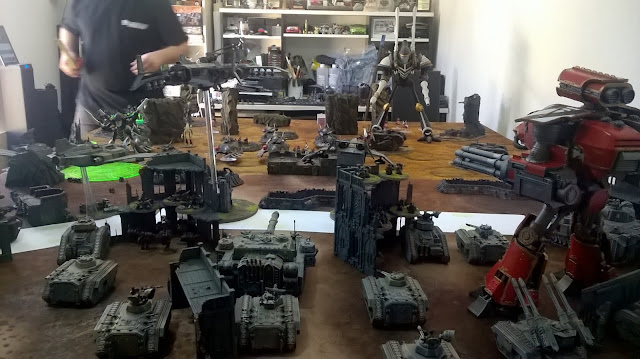 Turn 2 The Hellhounds and Sentinels the majority of the Imperial Guard continued to target the Phantom. The Shadowsword took another hull point before the Reaver nearly killed the Phantom Titan. Up stepped a trusty Basilisk which scored a penetrating hit to signal the end of the Phantom in two turns! (Dazza earned a bragging rights photo of a dead Phantom for this.)  Further shooting saw more damage inflicted to multiple Eldar vehicles and the destruction of all of the war walkers by the Sentinels. The Eldar continued to advance and started to get very close to the Imperial lines. Eldar forces in the form of some Striking Scorpions, Warp Spiders, and an Avatar of Khaine in to wreak havoc behind Guardsmen lines. A few vehicles were destroyed and the Reaver lost a few more hull points. The Eldar were getting very close and it was getting scary for the Guard. 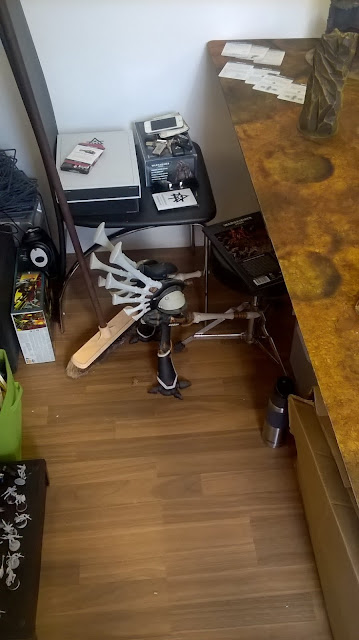 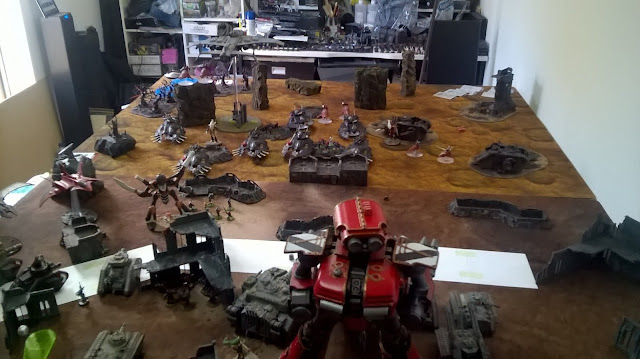 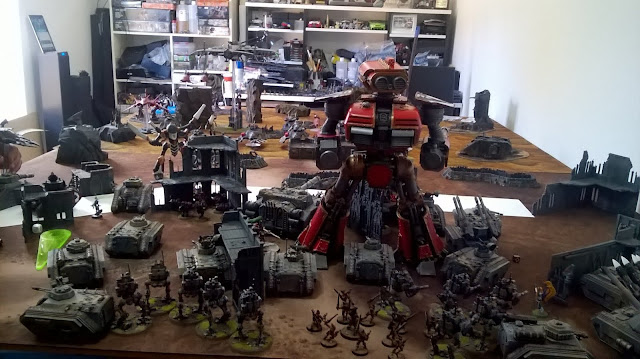 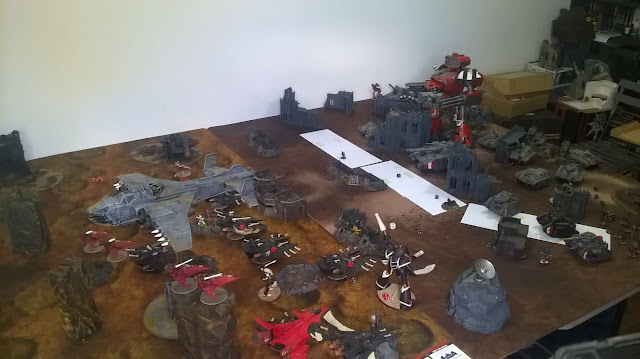 Turn 3 The Guard were feeling the pressure of the closing Eldar now and were fighting a bit of a rear-guard action. The Reaver was still looking healthy with most of its hull in tact but a disappointing round of shooting didn't do much to relieve any of the pressure. A couple of tanks were destroyed but the Imperial deployment zone was starting to seem very small and very crowded.  The Eldar had a very damaging return salvo as a unit of Wraithguard destroyed the Shadowsword in one round of shooting with their weapons and more tanks were destroyed through shooting. The Eldar were trying to make their superior close combat prowess count and the Avatar led the charge when he made a successful charge into the Reaver, nearly killing it.  The Avatar instead was destroyed by a well placed stomp from Mortis Vindictum. 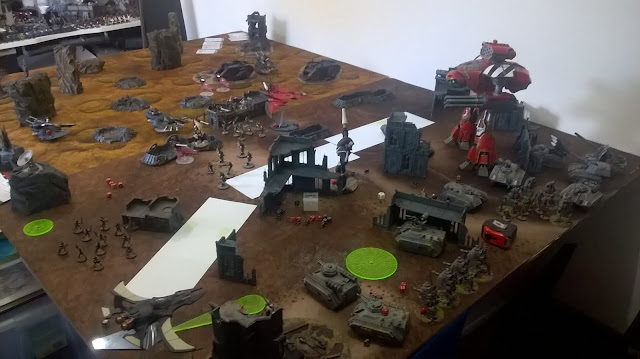 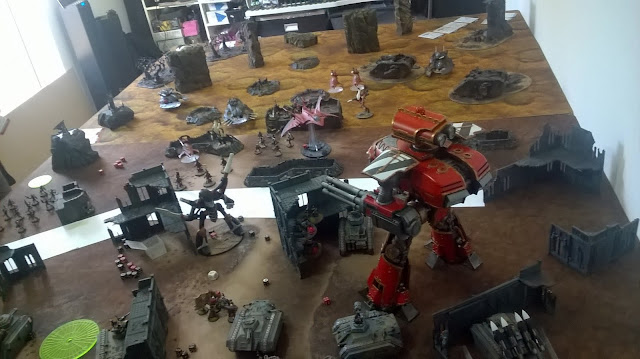 Turn 4 The Imperial Guard began to feel exhaustion at this point and their turn to strike was underwhelming.  The Wraithknight fell, as did one of the flyers, however, not much else suffered damage. The Eldar managed to finish of the Reaver this turn, but thankfully the explosion scattered harmlessly.  Mortis Vindictum would be able to be repaired however, though at great cost to the Imperium. A few more tanks and units of infantry were destroyed and, although there was beginning to be very little on the table, the Eldar were entrenching themselves in the Imperial deployment zone. 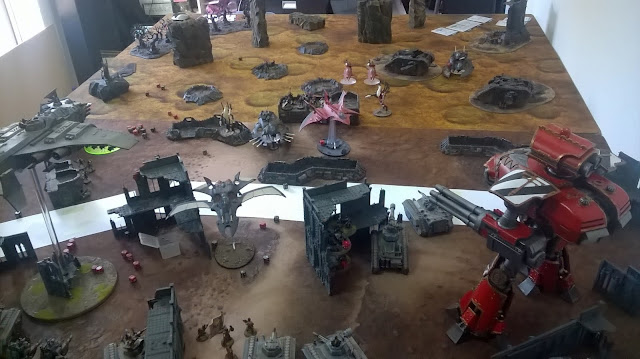 Turn 5 This was the last turn of the game. There was very little left on the table at this point. An Eldar flyer went down along with a vehicle or two and the Eldar brought down the Marauder and a few more units of infantry. 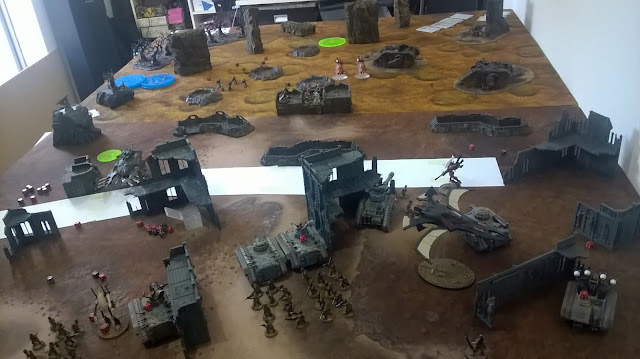 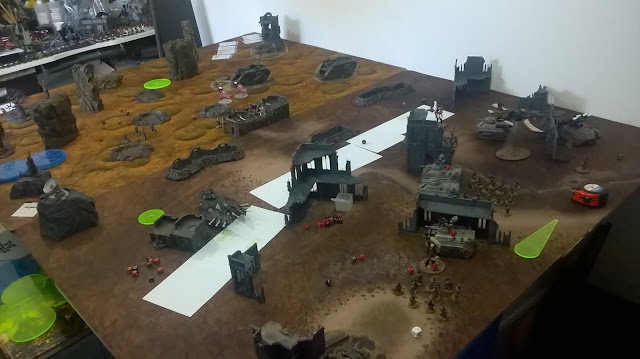 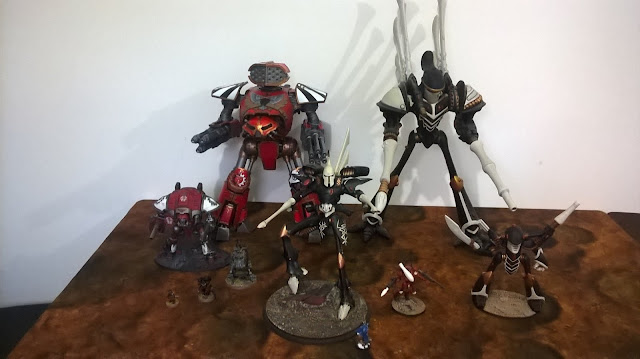 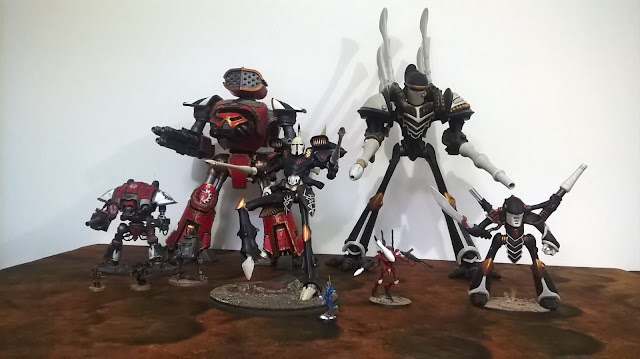 Further combat became a battle of attrition with an unclear victor.  It was at this point that the battle was called.

I hope you enjoyed the report.