Today we’re getting to do an early review of the new Loyalist Legios book for Adeptus Titanicus.  We’ll have reviews of the Legios themselves, including some previously covered but that may have changed, as we go.  Let’s dive in. 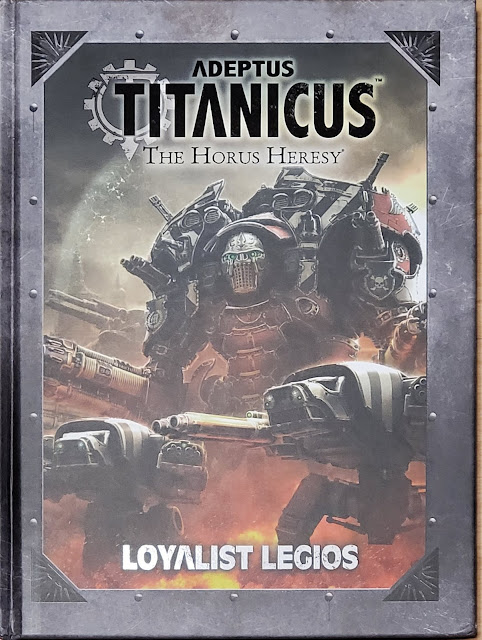 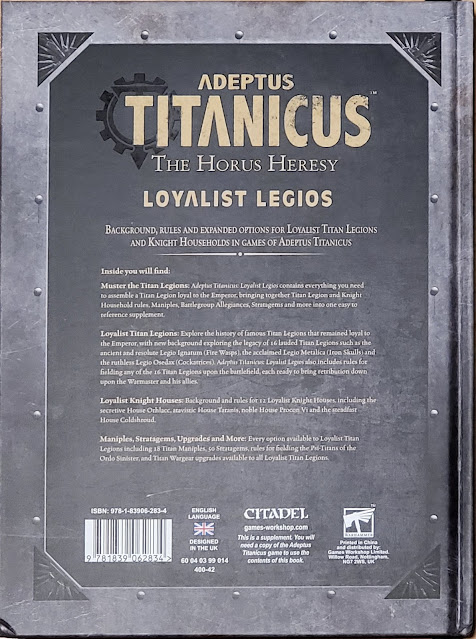 The sixth supplement in Adeptus Titanicus, Loyalist Legios, is a hardback book that breaks the mold of what we’ve come to expect.  This is unlike anything we’ve seen before and is not about building mechanics, laying down missions, or telling a story.  This book is all about Legio/Knight lore, ways to organize your force, and a compilation built around the titular Legios. 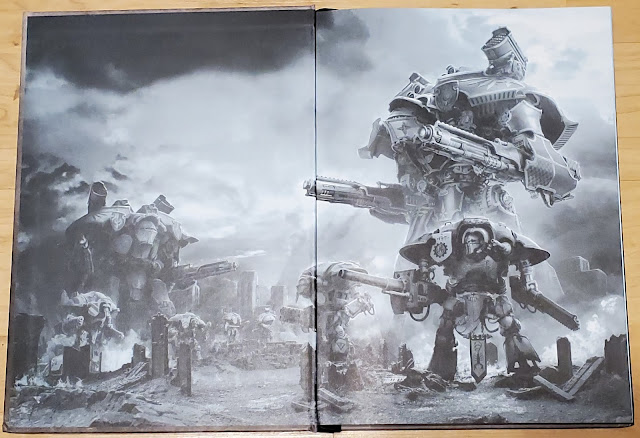 A massive 176 pages makes this the biggest book to date and includes:

A lot of these go hand-in-hand and we’ve found the best way to present it is to just hit the high points for you.  So, without any further waffling on, let’s jump in.

There is no dedicated lore to this book.  It is not a campaign book and does not seek to tell the tale of a set of bloody battles fought between the servants of the Emperor and Horus’s lapdogs.  However, each Titan Legion gets about a page to a page and a half of Legion lore, some of it new.  Further, each Titan Legion now shows its materiel strength and stats about its title, grade, domain(s), and more.  Ditto for the Knights, who actually see the biggest lore increase, going from 1/3 of a page to the full-page lore that the Titan Legions are getting.

The best part is that this holds true for ALL Titan Legions and Knight Houses in the book.  This is certainly a special treat.

The book also dedicates almost a full page of lore to the mysterious Warmaster Titan, unleashed at the peak of the Heresy.  We’re also treated to some technical specs of this beast and the powerhouse nature of the Titan becomes crystal clear. 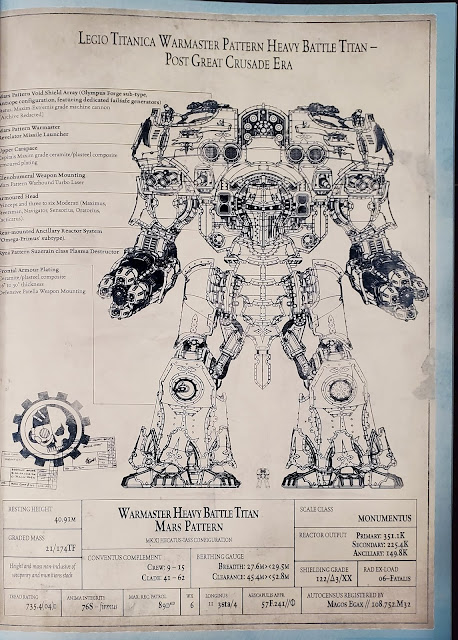 How you assemble a battlegroup for a game has been cleaned up, clarity has been added, and the restrictions now show up clearly.  Get ready for an “ouch” though.  Warbringer Titans have been moved to the Auxiliary classification, meaning that you can only bring one per maniple when the Warbringer itself is not part of a maniple.  Want to run both a Warbringer and a Warmaster as auxiliary at the same time in the same vein you can have an auxiliary Titan the same time as an Acastus auxiliary Banner?  No dice.  With that said, the new battlegroup-building rules are very easy to understand, and all of the previous benefits you got from building a Loyalist Battlegroup still exist. 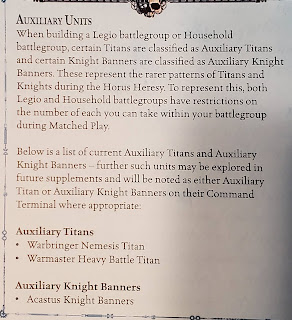 In addition to the cleaned-up rules for building a battlegroup, we also have all of the maniples listed in one place.  Each maniple is in a nice box that shows all of the required Titans and the options available along with the special rules that the maniple gets.  It’s well-presented and makes things easy to find. 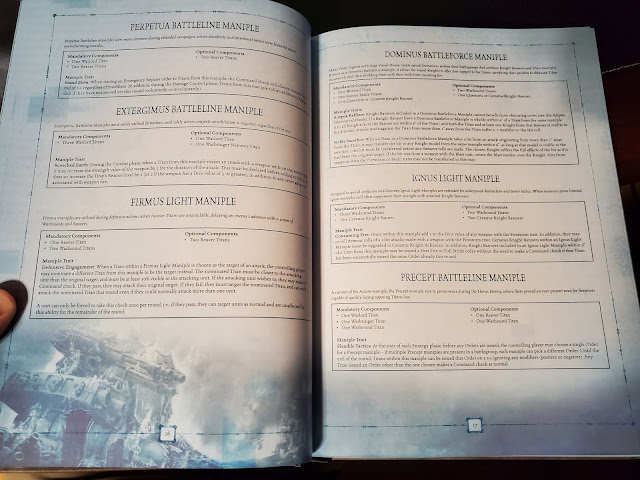 After the maniple rules the book goes into each Titan Legion and the corresponding Knight House most likely to fight alongside it.  Some Legios have refreshed rules while all Knight Houses in the book have their own House traits.  This is the meat of the book and will help all players to quickly find their Legio instead of rooting through all of the campaign books.  Loyalist Legios also brings that beloved Legio Metalica into the fold. 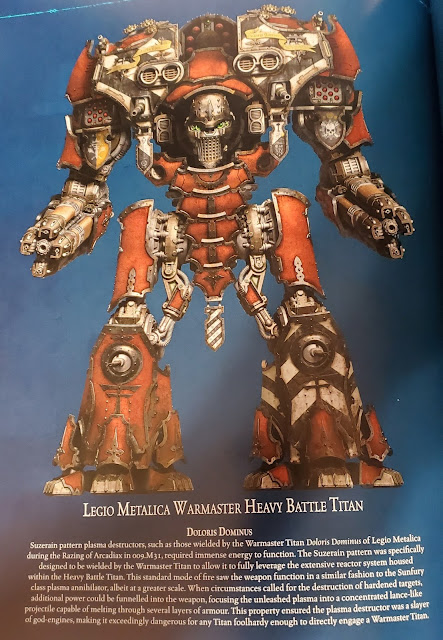 Rounding out the book is a set of tables showing off all of the different weapon profiles that each Titan can take, the unique or common upgrades that all Loyalist Titans can take, and their stratagems. 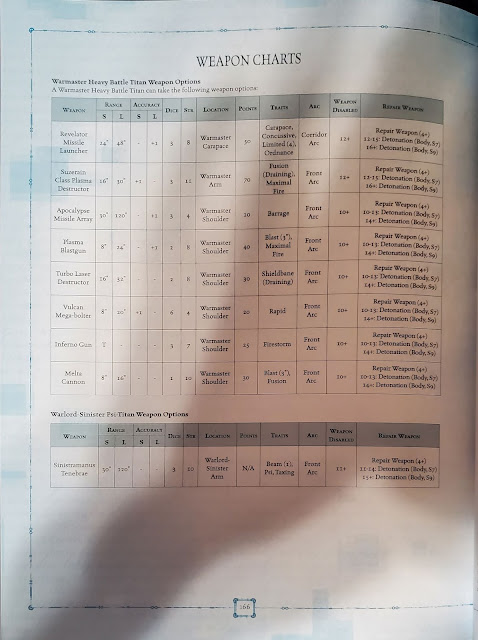 This book is perfect for Loyalist players and we know that Traitor players will be happy when they get the same treatment.   This book consolidates the information found in five (5) other supplements, cleans it up, brings it up-to-date, and makes everything easy to find.  This is an absolute homerun and definitely a book Loyalist Titan players should pick up.